Moving Into Packaging Was Right for These Commercial Shops. Is It Right For You?

Look no further than the Printing Impressions 400 roster of North America’s top printing firms for clear evidence of the movement of commercial printing businesses into packaging.

The annual list identifies companies that report both commercial and packaging printing as being among their specialties. The 2018 edition of the PI 400 reveals 73 of these dual producers, whose average and median percentages of revenue derived from packaging are 24% and 13%, respectively.

Printing Industries of America (PIA) has also been tracking the trend. A Fall 2018 report based on research by PIA’s Center for Print Economics and Management and the Jones School of Business of Middle Tennessee State University benchmarked 28 products offered by printers responding to a survey.

Nearly 32% of respondents said they provided package manufacturing (including converting and envelope printing) as a service. The research also named packaging as a category in which demand is growing.

Packaging’s appeal to commercial printers is one of the salient findings of a study by the Specialty Graphic Imaging Association (SGIA) into convergence: an industry-wide phenomenon driven by the expansion of print services providers (PSPs) into adjacent areas of business opportunity.

Takes Time to Do It Right

The various data sets confirm that many commercial firms have their sights set on packaging and that some are doing quite well with it. But, in practice, there are no overnight successes — playing seriously in the market requires years of commitment.

Greg Moquin, president of Moquin Press in Belmont, Calif., has been producing packaging of one kind or another ever since he started the business in a Redwood City, Calif., garage 30 years ago. “I always had a Kluge (foil stamping press) and a printing press from the get-go,” he says. Having also mastered diecutting and folding-gluing, Moquin has had a concentration in folding cartons for the last seven years.

Because J.S. McCarthy Printers, of Augusta, Maine, was strong in greeting cards, it had print and postpress capability that also supported the folding carton work it ventured into 14 years ago when a broker brought the company its first such job. Folding carton packaging “was a natural fit,” Jon Tardiff, president and CEO, says. “We had the right presses, diecutting and stamping equipment in place.”

When partners Brad Flagge, Nick Bova and Craig Inglish acquired the company that would become Push Solutions of New Berlin, Wis., in 2012, packaging provided only a sliver of its revenue. Now, according to Bova, “it’s blossoming,” and probably represents “the next major corner we’re going to turn” in the development of the business. An investment in finishing equipment for folding cartons is part of the plan, adds Flagge.

Focused spending and a deliberate approach to the market have paid off for all three of these firms. Moquin says that his packaging business is growing by 10% to 15% per year and presently accounts for about 40% of his sales. It’s distinct from his commercial business, which is trade-only; packaging services are sold direct to food, nutraceutical and cannabis producers, among other clientele.

When its current owners bought it, Push Solutions was a $1 million business. Today, according to Bova, sales stand at $9 million, with about one-third of the annual turnover coming from packaging. He says the company is “really aggressive” in the mid-range carton space spanning runs of 250,000 to 400,000 pieces, where Push Solutions often can outperform bigger competitors. Continued success in this sweet spot could lift packaging’s share of the business to 50% in three to five years, Bova forecasts. 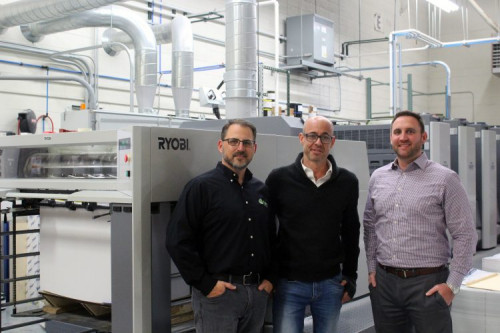 Partners Brad Flagge (from the left), Nick Bova and Craig Inglish have added packaging to the menu of product offerings at Push Solutions with the help of a pair of UV-LED equipped RMGT 9 Series sheetfed offset presses.

At J.S. McCarthy, notes Tardiff, “packaging is the fastest-growing market segment for us,” delivering 30% to 35% of sales. What’s more, it’s a stable source of business.

“Packaging is part of a customer’s cost of goods sold. As long as they are in business, they need to put their product in a box,” he explains. “Keep up with industry trends, partner with your clients to provide the best solutions — and folding carton work is like an annuity.”

Establishing a well-paying annuity begins with a substantial upfront investment, something that these companies haven’t hesitated to make. Each, for example, has added enough capacity in diecutting, stamping, foiling, folding and gluing so that finishing work seldom has to be sent to outside trade shops. This is essential to maintaining control over quality, scheduling and cost.

But the presswork comes first, and for true competitiveness in packaging, only late-model, large-format, high-efficiency offset lithographic equipment will do.

Push Solutions gets this kind of capability from a pair of RMGT 9 Series presses with UV-LED curing: one installed three years ago, and a second brought online in March of last year. These 24x36˝ presses, says Flagge, were the company’s “springboard” into packaging with their instant curing, substrate versatility and closed-loop quality control.

The centerpiece of the offset pressroom at Moquin Press is a six-color Speedmaster XL 106, the first press in the U.S. with Heidelberg’s “Push to Stop” technology for automated job changeover. Another special feature, Moquin says, is Prinect Inspection Control 2, an in-line system that checks every printed sheet for correct color and registration.

High-output presses like these thrive on long-run work, and while that is what most packaging production consists of, it’s not the only category of volume that holds opportunity for commercial printers.

Moquin, for example, says his company has a found a short-run sweet spot in batches under 20,000, whether they’re individual jobs or components of larger, aggregate quantities.

A recent project of the latter kind totaled one million pieces comprising 100 different SKUs: a challenge, Moquin contends, that high-volume packaging producers aren’t always good at meeting. This is why “small jobs like this are low-hanging fruit for us,” he says.

The definitions of “small job” and “short run” vary from shop to shop. At Push Solutions, says Bova, being able to handle customized short runs from 2,500 to 5,000 pieces “makes us that much more sticky” with customers. These jobs are produced on a Xerox iGen4 Diamond Edition digital press, which can print thick packaging stocks. Very small runs — as few as 25 pieces —for prototypes and samples come from a Fujifilm Acuity flatbed wide-format printer supported by an Esko cutting system.

Moquin Press and J.S. McCarthy also operate digital presses, but their devices are mostly used for applications other than packaging. “We haven’t really seen a big push for digital folding cartons beyond prototyping yet,” reveals Tardiff, noting that 99% of his folding carton volume is produced on 40˝ litho equipment. Although Moquin views digital printing as a less than ideal fit for packaging because of the technology’s coating limitations, Moquin says he’s looking forward to seeing what production inkjet platforms will be able to do in this area.

A strong track record in commercial printing doesn’t assure an identical result when a firm expands into packaging, but there’s no question that experience on the commercial side is an excellent base to start from. Tardiff observes that coming from a commercial print background makes it “much easier to service folding carton customers” because high standards for quality, turnaround and customer support are already in place. To maintain the standards in both market segments, he says, “we have to be top-notch.”

Of course, there are clear differences between the two markets. As Tardiff points out in one example, the buyers aren’t the same: packaging printers typically deal with purchasing managers and operations specialists as opposed to designers and agency personnel in commercial print.

But Moquin says that production-wise, “they’re really the same in a lot of respects” in that in both cases, success is about “getting the most out of a piece of paper that you can.” 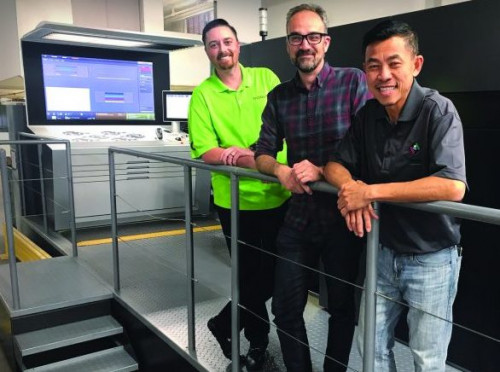 The Heidelberg Speedmaster XL 106 at Moquin Press was the first press in the U.S. with Heidelberg’s “Push to Stop” technology for automated job changeover. From the left, are Bryan Moquin, business development representative; Marcio Ribeiro, general manager; and Peter Tan, pressroom manager.

Flagge agrees that from a print manufacturing point of view, there’s “not much of a difference” between commercial work and packaging. He says Push Solutions aligns both in its offering of retail space solutions, which include store signage, fixturing and collateral, as well as product packaging.

“We’re selling that whole experience in the store,” he adds, noting that “all of our machinery is more or less cross-trained” for producing whatever the mix of printed items consists of.

Bova notes that one key lesson learned about success with packaging was the importance of being able to present samples. A drawback, he recalls, to Push Solutions’ first attempts at packaging was the fact that “we couldn’t prototype:” a problem solved with the installation of the Fujifilm Acuity flatbed and the Esko cutter. Now, reports Bova, “prototyping is an absolute sales tool for us,” sparking customer interest and increasing packaging opportunities “exponentially.”

Another takeaway is the need for patience at the beginning. “There is a learning curve to this, starting up front with our sales reps,” counsels Tardiff. It can take years, for example, to become truly well-versed in structural design, CAD and other packaging disciplines that have no equivalents in commercial production.

But, perhaps the best advice about packaging for commercial firms properly equipped and genuinely qualified to produce it is simply to make the commitment and forge ahead. As Flagge points out, packaging is a volume-based business, and it’s natural for a commercial shop to covet that additional volume. “We’ve got presses to run,” he says.

Or, as Moquin concludes, looking back at the rewards his company has reaped from packaging, “I just wish I’d started going after it 10 years ago.”

END_OF_DOCUMENT_TOKEN_TO_BE_REPLACED
Happening Today
The Powerful Case for US Book Manufacturing