A press release issued late yesterday by Denver-based Quark Software caught my attention. It revealed that Quark has been acquired by Parallax Capital Partners, a software-focused private equity firm located in Laguna Hills, Calif., which has purchased more than 20 companies since 1999. The release stated that the new owners intend to help Quark accelerate the adoption of its "transformational content automation solutions" through organic growth and via acquisitions.

The release also included a quote from James Hale, managing partner at Parallax, who notes, “Quark is having a transformational impact within a wide range of industries, completely redefining how organizations create, manage, publish and deliver business-critical content. This is a company with outstanding talent and leadership, innovative technology and an acclaimed customer base. Parallax is looking forward to bringing its experience and expertise to help Quark take its enterprise content automation business to the next level.”

I had to step back for a second. As an editor involved in the magazine publishing and printing industries who was exposed to QuarkXPress software during the evolutionary days of desktop publishing throughout the 1980s and 1990s, Quark surely isn't the "transformational" company that I recall.

In fact, from my perspective, Quark and the way that it lost its virtual monopoly with a reported 95% market share in the professional publishing space to a then-upstart Adobe InDesign alternative — that launched without much fanfare in 1999 — would serve as a great case study for the Harvard Business Review on everything a company can do wrong to alienate its customer base through a perceived "arrogance," poor customer service/support, and software version upgrades that didn't fall in line with the needs of the graphic designers and printers who used QuarkXPress.

Our magazine publishing and in-house graphic design operation, like so many, was a QuarkXPress user that transitioned over to InDesign several years ago largely for those reasons. I also heard several complaints, although admittedly anecdotal, about Quark's poor, or even lack of, customer support that help lead to its market share loss.

In an insightful blog authored by Dave Girard in 2014, entitled "How QuarkXPress became a Mere Afterthought in Publishing," he points to several of Quark's shortcomings, including its failure to embrace and support the Apple Macintosh platform, despite knowing that graphic designers in the desktop publishing space prized their Mac computers (a loyal group that largely kept Apple going as a viable company during that time period.

Girard wrote: "Quark repeatedly failed to make OS X-native versions of XPress — spanning versions 4.1, 5, and 6 — but the company still asked for plenty of loot for the upgrades. With user frustration high with 2002’s Quark 5, [then]CEO Fred Ebrahimi salted the wounds by taunting users to switch to Windows if they didn’t like it, saying, 'The Macintosh platform is shrinking.' Ebrahimi suggested that anyone dissatisfied with Quark's Mac commitment should 'switch to something else.' "

And, as Girard points out, rabidly loyal Mac users weren't about to switch to a Windows-based environment, so they switched to InDesign — in droves.

At the time, he also praised Adobe InDesign's common-sense software development approach that didn't just copycat QuarkXPress' feature set, noting, "It made a program that was both for production nuts who needed to work efficiently and creatives who were shown how digital typography and layout was meant to be." 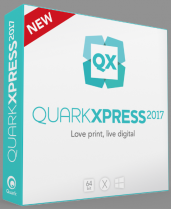 Quark, as a company, isn't dead in the water today, however. It is now focused on enterprise content automation solutions that enable organizations in industries such as finance, manufacturing, energy and government to deliver business-critical content to any format and any channel — mobile, print, Web, and more. Yesterday's press release also touted how it was recently selected as a "Gartner Cool Vendor in Content Services" and a 2017 SIIA CODiE Award finalist for "Best Multi-Channel Publishing Platform."

But Quark's QuarkXPress software publishing business enterprise has almost become a mere footnote. I even found an offer on its website targeting existing Adobe Creative Cloud InDesign and Photoshop users "looking to escape the rental trap." For $399 (regularly $849), you can purchase a perpetual license to own a version of Quark's Mac/Windows-compatible QuarkXPress 2017 creative design and layout software. The perpetual license means the user actual owns, not rents, it, which can be upgraded to future versions.

Although it sounds like a good deal, it's an offer that comes too little and too late. InDesign is now the de facto king of the hill. And I doubt very much that Adobe will let its software publishing franchise falter the way that Quark did several years ago.

I'd love to hear your opinions on the QuarkXPress vs. InDesign saga, as well as any personal experiences that you might have had as —I now assume — a former QuarkXPress user.