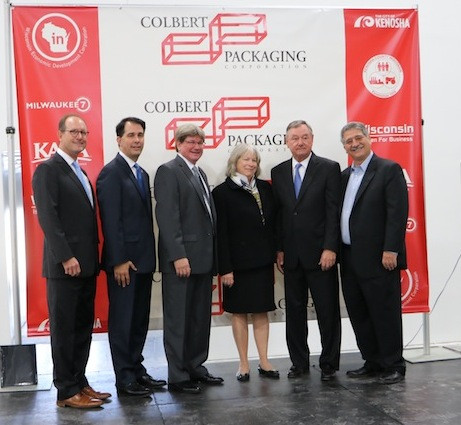 LAKE FOREST, Ill. — October 19, 2016 — Colbert Packaging, a leading manufacturer of folding cartons, rigid setup boxes and paperboard specialty products, has announced definitive plans to move its flexographic packaging operation and related warehousing services to Kenosha, Wis. Colbert has committed to purchasing the property at 9949 58th Place, a brand new 173,000-square-foot building with 18 loading docks sitting on 16 acres of land. It is part of an industrial business park located just over the Wisconsin border and less than a mile from I-94. The building interior is currently being customized to Colbert’s manufacturing floor and office space specifications.

Colbert’s new property was the site of an event hosted yesterday by the Office of the Governor. Wisconsin Governor Scott Walker joined several local elected officials, including Kenosha Mayor John Antaramian and Kenosha County Executive Jim Kreuser, in welcoming Colbert to the area.

"By establishing operations in Wisconsin, Colbert Packaging joins the 9,500 manufacturers around the state that employ hundreds of thousands of workers and produce top-quality products," says Governor Walker. "On behalf of the state of Wisconsin, I’m pleased to welcome Colbert Packaging to our state, and we applaud them for making this commitment."

Since 1998, Colbert has been running its flexographic division out of a 45,000-square-foot manufacturing facility in Lake Forest, Ill., just a few blocks from the company’s headquarters. To support growth in the flexographic division, a separate 25,000-square-foot warehouse was established in the nearby town of Libertyville, Ill., in 2011. The Kenosha, Wis., facility not only replaces both of these existing properties, but at 173,000-square-foot, it is more than double the size of the facilities’ combined square footage. This new facility will also have the distinction of being the largest of Colbert’s three manufacturing plants, a distinction held by the 109,000-square-foot-plant in Elkhart, Ind., since 2004.

"We started the flexo division 18 years ago and have since been through two expansions. We’re excited to be making this significant investment for expansion that will be the footprint for our projected growth into 2020 and beyond," says Jim Hamilton, president of Colbert Packaging.

Hamilton said southeastern Wisconsin was a natural choice for its proximity to headquarters, major transportation hubs and local amenities as well as the state’s favorable business climate. He also noted that a high percentage of Colbert’s employees live along the Illinois-Wisconsin border and I-94 corridor, and some already call Kenosha County home. "Wisconsin, widely known as home of the Green Bay Packers, cheese curds and craft beers, is also a great state for the printing and paper-making industries, and the technical expertise of its residents in these fields," he adds.

The new property was selected following a thorough search of available properties in the region, and is unique in that it provides an opportunity for both build-to-suit and quick occupancy. Work on the building’s interior — the design and buildout of office space as well as a manufacturing floor that drives efficiencies, high quality and cost-effectiveness — is now underway. When complete, the facility will house a variety of current assets used in the production of flexographic printed cartons, pressure-sensitive roll labels and package inserts, with ample room for future product line and technology expansions. The relocation is expected to be finalized by the end of the year.

About Colbert Packaging
Since its founding in 1959, Colbert Packaging has built a solid reputation as a manufacturer of the highest quality folding cartons, rigid setup boxes, labels and inserts, and paperboard specialty products. The company’s custom folding carton, flexographic packaging, pressure-sensitive roll label and package insert operations are based in Lake Forest, Ill. A separate folding carton, rigid setup box and paper tray forming facility is located in Elkhart, Ind., which is also home to Colbert’s stock box program.

Strategic Assessment: Why Do It?