Chicago Tribune Owner Loses Out on Sun-Times Buy, But Still Prints, Distributes It as Part of Multi-Year Pact 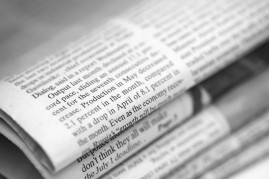 An investment group called ST Acquisition Holdings —led by former Chicago Alderman Edwin Eisendrath, about a half-dozen local investers and a coalition of labor unions, including the Chicago Federation of Labor (click here to see a list of the unionized commercial and wide-format/signage printers located in the Chicago area) and some other still-to-be-announced local unions — has acquired the Chicago Sun-Times newspaper and the Chicago Reader, a free weekly newspaper, after overcoming a competing bid from the owner of the Chicago Tribune.

"A great group has come together and made sure that a genuine voice with honest and good reporting that connects with working men and women thrives,” the Sun-Times quoted Eisendrath as saying just before the acquisition closed. He is a local politician who had failed in a 2006 bid to unseat then-Illinois Governor Rod Blagojevich.

Terms of the sale weren’t disclosed, but reports indicate that the purchase price of Sun-Times parent Wrapports LLC totaled only $1. The investment group beat out Tronc Inc. (Tronc stands for Tribune online content), which owns and publishes the Tribune, Baltimore Sun, Los Angeles Times and several other U.S. newspapers. In a strange twist, the former owner of Wrapports is current Tronc Chairman Michael Ferro, who was said to have donated his Wrapports shares to a charitable trust when he assumed control of Tronc, the Sun-Times reported.

Due to antitrust concerns, the sale ended up requiring approval by the Department of Justice's Antitrust Div., which typically frowns on a single body owning multiple media holdings within the same market. Thus, it leaned toward the ST Acquisition Holdings offer, as long as the group could show it had the necessary operating funds to keep the papers as going concerns. The Sun-Times said Eisendrath had secured more than $11 million in funding, which made his group the winning bidder and also led to the reported $1 purchase price.

Tronc reportedly sought the Sun-Times, in large part, so it could maintain control over what was originally a $25 million-per-year, multi-year contract for the Tribune to print and distribute the Sun-Times. The printing and distribution outsourcing contract reportedly saved the Sun-Times about $10 million annually as a result of layoffs of pressroom staff, drivers and other production and operational workers.

Wrapports’ multimillion-dollar annual contract with Tronc to print and distribute the Sun-Times is a major revenue producer for the Tribune owner. So, controlling that revenue stream going forward was a major incentive for Tronc to try to purchase Wrapports.

According to Crain's Chicago Business, the printing pact between the two companies was originally forged in 2011, but was reduced significantly in 2014 when the two parties renegotiated the contract in conjunction with the Sun-Times selling several suburban newspapers it owned to the Tribune.

Despite having an ownership stake, a representative from the Chicago Federation of Labor was quoted by the Sun-Times as saying that the newspaper will remain independent and not show any favoritism when it comes to its reporting about labor groups. “We didn’t get involved in order to get a pass from reporters,” CFL secretary-treasurer Bob Reiter told the Sun-Times. “Our reporters will look at what is happening and report the story. If that means someone in the labor movement has an issue, then that’s the story."