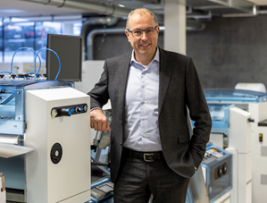 Daniel Erni has been with Hunkeler since 2016. As Chief Sales Officer and member of the Executive Board he has been a major force in the company’s ability to increase sales, earnings and market share in recent years. This success was made possible in part by his excellent rapport with Stefan and Michel Hunkeler, as well as his highly effective relationship with the management, employees, customers and partners. Prior to joining Hunkeler AG, Daniel Erni held positions as managing director and sales manager in several other companies.

Daniel Erni will continue to report directly to Michel Hunkeler, who will in turn focus on the company’s strategic direction and support various stakeholders around the Hunkeler Group.

Stefan Hunkeler’s position as Chairman of the Board of Directors will continue unchanged. The existing and proven executive management team will also remain in place.

The shareholders and the Hunkeler family fully support this new structure. We are convinced that now and in future Hunkeler corporate and family values will continue to be served and help Hunkeler AG retain and further develop its top position in the industry.