The Dingley Press has announced a $17M expansion that will significantly boost capacity.

The Dingley Press, a privately-held catalog printer based in Lisbon, Maine, has announced a $17 million expansion that will increase the catalog printer’s capacity. Eric Lane, The Dingley Press president and CEO, told Printing Impressions that the investment will include a new four-color, 48-page Goss Sunday 3000 heatset web offset press that will be installed in December, a third co-mail line manufactured by SIM Products that will be added in January, and a supporting robotic arm at the end to stack the printing signatures.

“This expansion will allow our company to grow its sales by approximately 30%,” Lane says, adding that the added capacity will also create up to 20 new jobs.

The Dingley Press’ roots go back to 1928, when it was founded in Lewiston, Maine. The company moved several times over the years, and maintained a long-term relationship with L.L. Bean until, in 1981, L.L. Bean changed its catalog printing specifications to rotogravure, which made The Dingley Press ineligible to renew its contract.

In 2004, The Dingley Press was acquired by The Sheridan Group (which itself was purchased last month by the CJK Group) but Chris Pierce, The Dingley Press’ current chairman and a 2014 Printing Impressions/RIT Printing Industry Hall of Fame inductee, reacquired the company in 2013. Today, The Dingley Press is one of the largest catalog printers in the U.S., serving customers in 41 states, employing 360 employees, and is on pace to reach $80 million in sales with 170 customers in 2017. The company operates out of a 268,000-sq.-ft. facility,  plus another 100,000 sq. ft. of leased space offsite. 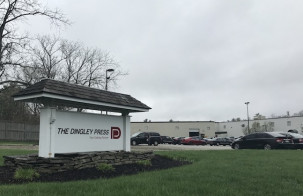 The Dingley Press is a privately-held catalog printer based in Lisbon, Maine.

“We have grown our customer base significantly since 2013 and continue to add new clients on a monthly basis,” notes Lane. “We plan to grow our niche in the catalog printing market by continuing to bring a great value proposition to our existing and potential customers. Our short cutoff press equipment provides significant value, and ever growing co-mail pools provide efficient and predictable mail cost and delivery,” he relays.

According to Jim Gibbs, VP of sales, The Dingley Press has also made significant contributions to the state of Maine's economy. The company has a $13 million annual payroll, buys $10 million worth of paper from Maine-based mills, and spends an additional $6 million with other Maine based-vendors. "As native Mainers ourselves we take great pride in being able to contribute to the local economy," he comments.