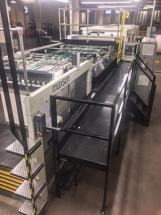 The sheeter’s high-speed cutter is outfitted with a reject gate, Tidland Class 3 slitter knives for improved cuts, and a stacker with a scissors-lift load table that can change out skids effortlessly. Moreover, the use of air helps lightweight paper remain jam-free when flowing into the stacker.

The new Maxson sheeter can sheet up to four web rolls from 15-82˝, and can accommodate the needs of the digital, folio and large-format markets. 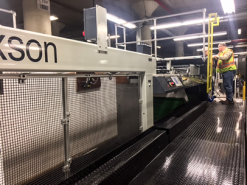 “This is the fifth sheeter and the eighth piece of equipment we have purchased over the last seven years,” says Robin Schaffer, president and COO of Case Paper Co. “We are pleased to be able to expand our offerings so as to keep pace with our customers’ ever-changing needs and requirements.”

Case Paper is now one of the only distributors in the industry that can convert paper and board and deliver the skids or rolls anywhere in the United States, usually within 48 hours or less.

About Case Paper
Established in 1943, Case Paper Co. is one of the largest privately held distributor and converter of paper and board for the packaging and printing industries. They have divisions in California, Pennsylvania, New York, Chicago, Texas, Florida, and North Carolina.

Navigator Co. to Increase Paper Prices Up to 8%