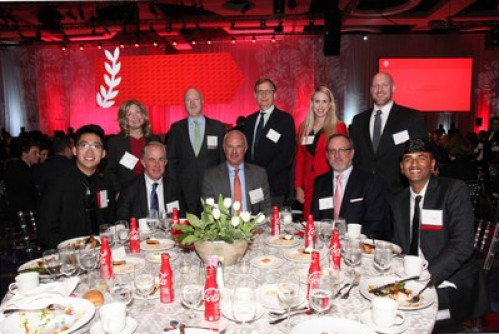 Canon Solutions America, Inc., a wholly owned subsidiary of Canon U.S.A., Inc., celebrates the recipients of the 2019 Coca-Cola Scholars Program scholarship. In addition to receiving $20,000 college scholarships, Coca-Cola Scholars traveled to Atlanta, Ga., earlier this month for Scholars Weekend, where they served as the guests of honor at a celebratory banquet, which Canon Solutions America was proud to support.

This year, 150 high school seniors were selected from an initial pool of 95,715 applications from across the country based on their academic excellence, leadership, and service demonstrated in school and community activities as part of 3-stage selection process. "I want to impact the world by drawing attention to issues that are so often unaddressed," remarked Kaitlyn Brennan, a 2019 Coca-Cola Scholar. "The youth have a stake in all of those issues and should have their voice heard."

Said Zoe Weiss, another 2019 Coca-Cola Scholar, "Coca-Cola Scholars gives me access to a huge network of people who have the same goal to change the world. We're going to have to work together...to create change at such a broad scale."

"We believe that identifying these young leaders throughout the country and encouraging their passion for serving others not only empowers the students, but also lifts up those around them," said Jane Hale Hopkins, President of the Foundation. "The Coca-Cola system is dedicated to giving back to the communities they serve, and the Coca-Cola Scholars Foundation is proud to be a part of that commitment."

"Canon Solutions America looks forward every year to supporting organizations, such as the Coca-Cola Scholars Foundation, which align with our corporate philosophy of Kyosei—which translates closely to 'All people, regardless of culture, custom, language or ethnicity, living and working together for the common good,'" said Pete Kowalczuk, President of Canon Solutions America. "This opportunity resonated with our goal of not only improving our local and global community through our own initiatives, but engaging with our customers to support and help elevate their own message of social responsibility."

END_OF_DOCUMENT_TOKEN_TO_BE_REPLACED
Happening Today
The Powerful Case for US Book Manufacturing