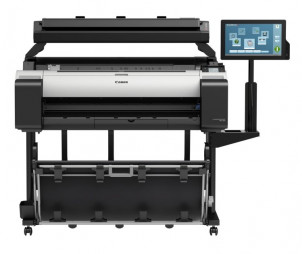 MELVILLE, N.Y. - September 20, 2018 - Offering a new versatile large format printing solution, Canon U.S.A., Inc., a leader in digital imaging solutions, has unveiled the latest offerings from its imagePROGRAF lineup: the TM Series. The new TM Series is designed with the quality, speed and ease-of-use that customers have come to expect from Canon’s imagePROGRAF devices. The TM Series is designed to offer a solution that is not only ideal for technical documents, such as CAD drawings and GIS maps, but also short-term outdoor posters, signage and displays with the use of Canon’s LUCIA TD water resistant pigment ink.

Canon has engineered the TM Series to be faster than previous five-color imagePROGRAF models when printing sets or multiple page documents by optimizing the print sequence time, helping to increase productivity for the end-user. This series offers wireless printing, an intuitive touchscreen panel and quiet operation, making the imagePROGRAF TM Series an ideal fit for retail, restaurants, and office settings as well as the traditional architectural, engineering and construction environments.

With a strong focus on ease-of-use with the addition of new software and hardware enhancements, these new models are designed to provide users of all-types with everything that they need to produce a variety of output. Utilizing LUCIA TD pigment ink, the imagePROGRAF TM Series provides superb print quality and longevity for vibrant displays and outdoor signage, especially when used with Canon’s water resistant media - opening up new markets and applications for these printers.

“Our company always strives to make our technology as versatile as possible to meet the needs of all types of users, whether they are architects or artists,” said Shinichi Yoshida, executive vice president and general manager, Business Imaging Solutions Group, Canon U.S.A. “We are very excited to launch the imagePROGRAF TM Series, which allows customers to use our large format printers in ways that they may not have used them before. With these new models, Canon has improved the productivity and usability to redefine what is possible with a large format printer.”

Canon’s imagePROGRAF TM Series offers a smaller footprint for 36-inch and 24-inch large format aqueous inkjet printers, making it a perfect fit for CAD, retail and office environments .1 Canon has engineered the TM Series to make it up to 60 percent quieter than previous imagePROGRAF models for less distractions in the workplace. With many users printing on plain paper, the TM Series can produce both precise drawings and vibrant posters on economical uncoated inkjet media. These drawings and posters can be printed directly on the imagePROGRAF TM-305 device with the use of a USB thumb drive, helping to simplify the basic printing process.

The TM Series of printers also include security features, such as Secure Disk Erase, which conforms to United States Department of Defense standards (DoD5220.00-M), IPSec support, SSL/TLS and 802.1x authentication, which can be critical for those users handling sensitive material.

Launching at the same time are the Scan-to-Copy/File/Share systems the imagePROGRAF TM-300 MFP T36 and TM-305 MFP T36 which feature an integrated 36-inch T36 scanner, all-in-one computer and SmartWorks software. These systems feature the direct attachment of the scanner to the printer, helping to eliminate the need for a separate stand, saving space in close quarters. The imagePROGRAF TM MFP T36 Series provides users with an intuitive 15.6-inch color touchscreen, making it larger than many comparable competitive models.  The ability to scan to multipage .PDF is standard and   users also have the ability to scan-to-copy and scan-to-file simultaneously with these models.

To give users all the tools that they need, Canon has included a robust software suite in the TM Series devices. Among the software included is Direct Print & Share, which now offers thumbnail previews of multiple images and faster processing speeds, and Free Layout Plus*, a new program that can be accessed directly from Microsoft Office programs. Also included with the TM Series models are the following: