Cal Poly won the Kipphan Cup, for the second time in three years, at the annual conference of the Technical Association of the Graphic Arts (TAGA), held March 17-20 in Minneapolis, Minn. 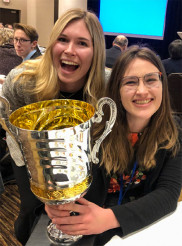 Cal Poly’s TAGA team, comprised of 25 graphic communication students, was awarded the top prize for its technical journal, a high-quality, student-produced publication that showcases a range of complex printing processes. Scoring is based on technical writing, design, production quality and the quality of an online supplement.

“It was an impressive amount of work,” said TAGA advisor and graphic communication Professor Brian Lawler. “The students had the opportunity to Learn by Doing as they produced an award-winning journal.”

All of the students on the TAGA team assemble for a group photo.

Students in the Cal Poly chapter began work on their journal last September. They assembled technical papers and, in two cases, invited student scholars to produce a technical paper specifically written for the journal. While the technical papers were written and edited, the team worked on the design and planning of their printed journal. Production began in January. Hundreds of hours of work are spent each year in production.

The Kipphan Cup will be on display in the Cal Poly Graphic Communication Department office for the next year. Work has already begun on the TAGA student journal for 2020. A new team is being assembled, designs are being prepared, and the presses will be running soon.

Why WestRock Relies on G7 for Color Management