Bureau of Engraving and Printing Wants to Build $1.4B Print Production Facility to Replace Washington Plant 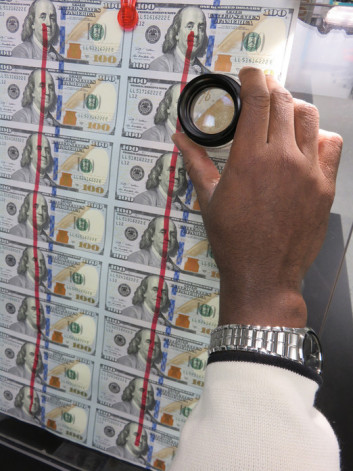 A sheet of $100 notes is inspected for overall quality. | Credit: Bureau of Engraving and Printing

As the old saying goes, it takes money to make money. In the case of the Bureau of Engraving and Printing (BEP), that dollar amount expenditure will be to the tune of approximately $1.4 billion.

That's the price tag for a brand-new production facility under consideration to replace the BEP's historic, but inefficient, six-story main printing building and annex on 14th and C streets in downtown Washington. The current site has been used to print U.S. paper currency (all coins are printed by the United States Mint) and other federal security products for the past 105 years. The BEP is now evaluating a 100-acre parcel on the USDA’s Beltsville Agricultural Research Center (BARC) in Prince George’s County, Md., for the construction of a smaller, but more efficient, print production facility.

"The BARC option provided by the Farm Bill – and moving to existing federal property – is a pragmatic solution to our needs," BEP Director Len Olijar said. "The majority of our employees live in Maryland: 65 percent; and of those, nearly half live in Prince George’s County. We are excited to partner with the USDA to assess this parcel of their existing federal land, while reducing their excess footprint of unused facilities, and to partner with the U.S. Army Corps of Engineers in Baltimore, who have extensive experience delivering large, complex federal projects like this one throughout the region.”

Following a feasibility study, the BEP determined that building a new production facility outside of Washington and renovating the administrative space in its current main facility was preferable to renovating its two current facilities in the District for both production and administrative functions. If that ultimately happens, the BEP’s annex building, which dates back to 1938, would likely be excessed, and the main building would be modernized so it could remain as BEP’s administrative headquarters and also house other federal offices.

This determination was based on various factors, including:

According to an article in Roll Call, the Donald Trump administration projects the move would save $601 million through fiscal 2031. Roll Call reported that the BEP determined in 2017 it would cost $2 billion to renovate the main building and annex in Washington, partly due to the costs of relocating the printing equipment from the main building to the annex during the renovation period. In addition, both buildings qualify for historic designation, which also would raise the renovation price tag.

"Backing out the $601 million saved by building a new facility would yield a revised cost estimate of roughly $1.4 billion, though ultimate outlays for the project are still unknown," Roll Call indicated, adding that the Treasury Department determined the new facility would require 28% less space and would lower annual operating costs by $38 million.

The BEP Washington facility, along with the production facility in Fort Worth, Texas, printed a reported $233 billion worth of currency notes (roughly 7.4 billion notes) last year alone. The addition of the Fort Worth plant in 1991 was intended to better serve the currency needs of the western half of the nation and to act as a contingency operation in case of emergencies at the Washington facility.

Aside from the actual printing of U.S. currency, other BEP activities include engraving plates and dies, as well as manufacturing certain inks used to print security products. In addition, the BEP provides technical assistance and advice to other federal agencies in the design and production of documents that require counterfeit deterrence. As a service to the public, it also processes claims for the redemption of mutilated paper currency.

How durable is paper currency? It would take about 4,000 double folds (first forward and then backwards) before a note will tear.

What was the highest denomination note ever printed? The largest note ever printed by the Bureau of Engraving and Printing was the $100,000 Gold Certificate, Series 1934. These notes were printed from Dec. 18, 1934, through Jan. 9, 1935, and were issued by the Treasurer of the United States to Federal Reserve Banks only against an equal amount of gold bullion held by the Treasury. The notes were used for transactions between Federal Reserve Banks and were not circulated among the general public.

Do $3 notes exist? The Bureau of Engraving and Printing has never been authorized to print a $3 note. However, during the 1800s, banks operating under federal and state charters issued notes of that denomination. These notes were printed by private contractors and are not obligations of the federal government.