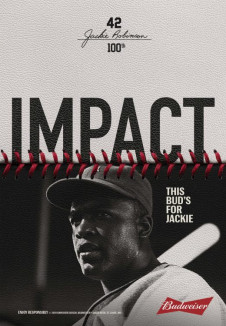 The moment Jackie Robinson walked onto Ebbets Field on April 15, 1947, he became an iconic and everlasting figure in American history. Born in 1919, the 2019 MLB season will mark the Centennial of the man that drove positive change far beyond his sport.

On MLB Opening Day, March 28th, Budweiser will raise a Bud to celebrate this legendary American, who profoundly changed the sport and cultural landscape of our country, with a landmark commitment to ensure his impact continues.

Jackie Robinson once said: “A life is not important except in the impact it has on other lives.”

Inspired by this quote, Budweiser has embarked on a national campaign that will honor the athlete and activist throughout the 2019 MLB season.

The film spotlights how Jackie broke baseball’s color barrier after many years of segregation in the sport.

“I’m honored to work with Sharon Robinson and Budweiser. All of us working in unison to pay homage to a great American who literally changed the game with the impact he made. Long Live Jackie Robinson!” said Spike Lee.

The film parallels Jackie’s impact on baseball with a wider discussion on unity and inclusion. It builds to a finish that showcases an inspiring collection of local advocates who are enacting change and progress every day through their own impact on local communities.

“Jackie Robinson was a true American hero who displayed incredible courage and resilience in the name of equality and unity” said Ricardo Marques, VP Marketing Core & Value brands at Anheuser-Busch. “His boundary-breaking achievements extend well beyond baseball through his work as a civil rights activist; undeniably Jackie Robinson continues to serve as an inspiration today for anyone out there looking to live with impact.”

“Impact” will air for the first time nationally on Opening Day as a TV commercial and in ballparks across the country. 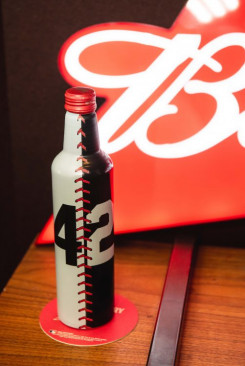 Sharon Robinson worked closely with Budweiser on the curation of the campaign, narrating “Impact” with powerful commentary that captures how Jackie continues to shift cultural paradigms to this day.

“I was incredibly honored to work with Spike Lee and Budweiser on ‘Impact’. Spike’s passion for the life and legacy of Jackie Robinson is legendary. We were confident that he’d pay tribute to my father in a fresh and respectful way. The deal was sealed when Budweiser stepped to the plate to help support us in funding the Jackie Robinson Museum,” said Sharon Robinson. 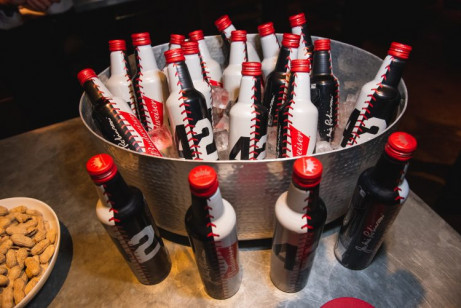 To find out more about “Impact,” please keep an eye on Budweiser’s social channels throughout this MLB season.