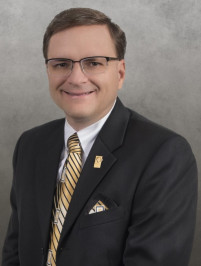 PITTSBURGH - November 13, 2017 - Bryan T. Hall, president and CEO of Graphic Visual Solutions of Greensboro, N.C., has been elected chairman of the board of Printing Industries of America (PIA) and its Foundation. The installation ceremony took place on Nov. 12, 2017 at PIA’s Fall Administrative meetings held in Charlotte, N.C.

“Bryan is an exceptional volunteer leader who brings passion and experience to the position. He will do a great job as chairman,” noted Michael Makin, president and CEO of PIA.

Click here to watch a video interview with Bryan Hall as he outlines a free member benefit and PIA's 2018 Agenda.

Hall was born on July 30, 1967. He graduated from The University of North Carolina at Greensboro with a Bachelor of Science Degree in Accounting (Magna Cum Laude). His passion for print came early in life as his father had worked in the industry for years. In 1985, while still in school, he founded Carolina Duplicating with his father Tom. The two-person venture quickly became Graphic Printing Services in 1988. From its humble beginnings, the company has steadily grown to employ over 100 dedicated print and marketing professionals and is continually researching, evolving, and expanding its product and service offerings, making it the dynamic organization it is today - Graphic Visual Solutions, the company name since 2008.

Since its inception, Graphic (as the company commonly refers to itself) has undertaken nine major building expansions, 12 major equipment expansions, integrated two key business acquisitions, provided significant training programs for its employees, and invested over $45 million to create one of the most comprehensive and state-of-the-art printing, packaging, and imaging facilities in the Southeast.

Hall has supported industry associations for years, including Printing Industry of the Carolinas Inc. (where he served as chairman of the board), NAPL, and PIA, where he has served on many committees, including chairing the Education and Marketing Committee.

Hall has given back to his community in many ways. He has served on the Greensboro Sports Council, the Greensboro Ballet Board, and on the Print Advisory Board of North Carolina A&T State University.

Hall played an instrumental role in the construction of a new building for a school in his community, and it was not just any school. Tri-City Christian Academy was the school he attended from first grade through tenth grade. The original building was over 50 years old, in disrepair, and needed to be replaced. He was the building committee chairman for the project as well as the project manager supervising and directing all phases of construction. He also was chairman of the board of the school. Over the last six years, enrollment has increased from 79 to 173 students.

Hall has received countless awards over the years and is a pillar of North Carolina’s Piedmont Triad community of Greensboro, Winston-Salem, and High Point. His company has been listed as a Triad Best Place to Work, was singled out as a Triad Outstanding Philanthropic Organization, and was named multiple years among the fastest 50 growing companies in the Triad.

Hall has been personally recognized as a Triad Mover and Shaker, Business Ethics Award winner, and Business Leader of the Year.

In 1996, he was North Carolina’s Young Entrepreneur of the Year and also a finalist in the national competition.

In the printing industry, American Printer recognized Hall’s company in 1994 as the #1 Fastest Growing Printer in the U.S. It is the recipient of countless print award competitions.

Other Officers elected on the PIA Board include:

Secretary to the Board - Michael M. Marcian

Past Chairman of the Board - Curt A. Kreisler