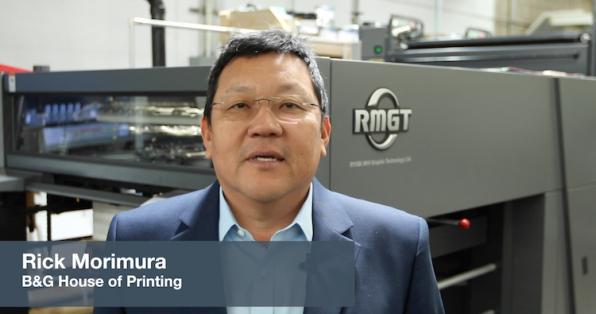 Rick Morimura is the VP of sales at B&G House of Printing.

LOS ANGELES — April 3, 2017 — When Rick Morimura, Vice President of Sales, B&G House of Printing, needed to upgrade his presses, he originally searched for a used 40-inch offset press. But then he started to work with Print & Finishing Solutions (PFS), a member of Graphic Systems North America (GSNA), and he quickly realized that the RMGT 9 Series was a much better fit. In only the first three months of running the RMGT 9 Series press, B&G House of Printing has seen their volume increase by 10-20% and their profitability increase by 20-30%, a trend that Morimura sees continuing — if not improving — through the rest of the year.

“We had two 20x28 presses, and they weren’t automated, so we had trouble competing with the 40-inch presses on some of the larger jobs we were doing,” said Morimura. “I had it in my mind to keep one of my old presses and get a used 40-inch to replace the other.” One of the biggest surprises for Morimura was that 8-up sheets could be produced on the RMGT press, which was double the amount he was running on his current presses. In fact, the RMGT 9 Series is so productive that he ended up replacing both of his presses with just one new machine.

“Our productivity is much improved,” said Morimura. “This press is very productive, and that’s while we’re still learning the technology. Once we get a full handle on how to use this technology versus our older presses, it will be even more productive. There has been a learning curve on handling the different nuances of LED UV printing, but we’re getting comfortable with it now.”

B&G House of Printing got their RMGT 9 Series press up and running just after Thanksgiving 2016, and they are already noting that a second press isn’t out of the question as the shop continues to grow. Right now, they are focusing on teaching their current client list about what the new technology can do for them, and the shop is already able to produce work that it previously wouldn’t have been able to bid on or would have had to sub out.

“We did four catalogs that were each over 150 pages, and the press runs were 5,000-10,000 — I would have had to sub that out previously. And of course, when you sub out, there is a very small margin, since I still have to compete with other suppliers. Now, I can produce the work and price it comparably to what I did before, but keep the margins in-house,” Morimura noted.

They have also been able to expand the materials they print on, allowing them to bring even more of the work in-house. “One thing that has really changed for us is the ability to print on synthetic materials,” Morimura noted. “Vinyl for window clings, styrene for display work, plastics — it’s given us a lot more versatility.”

Another huge benefit for the shop has been the speed at which they can move printed pieces into their finishing department. “A lot of our work now, we can print, and because it comes off dry, we can go right back through the press to print the back side, and then right into the bindery. Sometimes we’re in the bindery just a few hours after starting the job. If we have work scheduled in the morning, we can deliver it that afternoon, which is unheard of in sheetfed printing,” Morimura said.

“During my first meeting with Rick and Les I knew that the RMGT 9 Series was going to be the press that would bring B&G House of Printing current with today’s technology,” notes Kian Hemmen, Western Regional RMGT Sales Manager, PFS. “At that point, it became more of a conversation of what configuration was best suited for them.  Their choice to go with LED-UV was a fantastic decision, and I am so happy to see the high-quality work that they are now producing.  They produce some amazing work for some really high-end clients, and seeing them utilize the technology on the more difficult substrates is a lot of fun and why we all do this.”