Embossing Is More Than a Visual Enhancement

The visual appearance of a package is so important to a product’s success that brands often focus on playing to the sense of sight to urge a consumer to buy an item. But through the use of special effects beyond printing, packaging can entice other senses, create new consumer perceptions about a product, and increase a product’s functionality.

Embossing elements on labels and packages can — literally and figuratively — add a new dimension to a substrate. A raised surface, especially when combined with foil or varnish, does provide visual enhancements, but can also enhance the chances a consumer will touch the package, greatly increasing the likelihood of a purchase.

Kevin Abergel, VP of sales and marketing for MGI, a supplier of digital finishing solutions, says that MGI has conducted research on consumers’ reactions to packaging produced with embossing. He explains that when presented with an embossed package, consumers instinctively reached out to touch the product.

“That was a big, pleasant surprise for us and that’s when we started doing a lot of research into haptics and the effect that haptics has on marketing and packaging,” Abergel says. “That was a really big eye opener that people just wanted to reach out and touch it. If you touch something when you’re in a store, your chances of buying something goes up dramatically.”

In some cases, embossing focuses almost entirely on enticing a consumer’s sense of touch. David Polkinghorne, president of DMS, Inc., a manufacturer of rotary stamping and embossing dies and equipment, points to an example of a label with embossing elements that would immediately differentiate the label from its competition. The company presented it at a recent Labelexpo. DMS Inc. showcased embossing on the wings of this label, which provides both visual and tactile elements.

“We ran a beer label with a center label and with wings that wrapped around the bottle,” he says. “The wings were embossed with a leather pattern, and when you picked up this bottle, it felt neat. It felt like you were holding a piece of alligator skin.”

When done properly, embossing can also entice a consumer to purchase a product for reasons that extend beyond the sense of sight and touch. Joerg Daehnhardt, VP of postpress for Heidelberg, explains how embossing elements can provide a luxurious or premium perception of a product when implemented into a package.

For example, he notes that with multiple layers of embossing, a box for a wristwatch can contain visual elements that lead to a luxury package for a premium item. In this particular application, Daehnhardt explains that within the image of the watch, the rim, numberplate and digits were all embossed to varying levels.

“You can really start to play and explore with how far your blind embossing will go without direct match to print,” he says. “But if you want to match it to the print or foil, that is also possible.”

Typically, the goal of adding embossing to a package is to entice a consumer to buy the product inside. But, the use of embossing can also increase the functionality of a package.

Polkinghorne highlights a few examples where embossing can play a functional role, including in medical or pharmaceutical packaging. In these applications, Polkinghorne says a particularly deep emboss can help keep materials safely separated.

Additionally, he explains how embossing can play a key role in the packaging process. For example, the foil lids found on some yogurt or juice containers feature a stipple pattern embossed into the substrate. The reason for this stipple pattern, Polkinghorne says, is that before the lids are applied to the containers, they are stacked in a chute.

From the chute, a suction cup lifts each lid up individually to apply it to the container. Without the embossed stipple, Polkinghorne explains that the suction would pick up several lids off the stack, instead of one at a time.

“It’s gotten to be something people expect to see there, but its original purpose was to break the vacuum between lids in the stack so you could pull them off one at a time,” he says.

Abergel explains that one area where digital embossing can increase the functionality of a package is in the addition of braille. He states that, with recent federal regulatory changes, a major push toward adding braille to packages can be expected. With digital embossing, Abergel explains that the substrate is not being deformed in any way, such as the reverse “deboss” imprint of traditional foil stamping methods. Rather, a layer of varnish is being applied to provide that tactile feel, and only impacts one side of the paper.

With this capability, he states that braille can be applied to thinner-grade substrates, whereas now, braille can only be applied on materials that can withstand the physical impression of conventional embossing.

“The braille market is about to explode in North America because of a lot of these new accessibility laws that are being passed, especially for the healthcare, pharmaceutical, food and beverage markets,” Abergel says. “With continual regulatory changes to be considered in the future, I think there’s a strong advantage to doing it digitally.”

Like most aspects of the packaging process, there are a variety of ways to add embossing to a package. Rotary dies, flatbed or platen die systems and digital technologies, can all provide embossed finishes, and each offers its own unique advantages.

With rotary dies, such as the ones provided by DMS, Polkinghorne states that embossing can be completed in-line. While there are some in-line flatbed units available, he says that, for the most part, flatbed embossing is done off-line. Additionally, he explains that with rotary embossing, the amount of force needed for flatbed embossing is not required.

“With rotary tooling, you can do continuous patterns and textures,” he says. “Juice lids and yogurt lids are good examples of that stipple pattern. Because it’s rotary, you’re working with just a line contact. You’re not requiring the kind of force that you would if you were trying to do a stipple pattern on a flatbed.”

On the platen embossing side, Daehnhardt explains Heidelberg has been collaborating with paperboard supplier BillerudKorsnäs to explore the application of FibreForm, a new substrate that allows converters to reach embossing depths of 2.5 to 3 millimeters — five to 10 times that of a typical emboss.

Daehnhardt explains that the advantages with this process are that it can be used in existing equipment, and converters do not need to purchase a dedicated diecutter to achieve this enhanced emboss.

“The beauty is you don’t even need a heated chase,” he says. “It’s a cold embossing process that will work on any diecutter that has over 200 tons of cutting pressure.”

On the digital embossing side, Abergel explains that in addition to providing an embossed finish without deforming the substrate in any way, digital technology can also introduce variability to embossing. 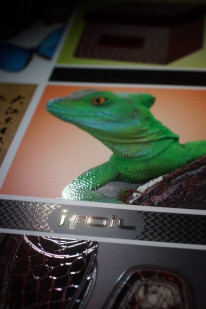 MGI’s digital equipment can add an embossed foil effect to packaging, making for a luxurious appearance.

“Whether it’s batch numbers for security tracking, versioning from a production standpoint or personalization from a marketing standpoint, what’s really cool about embossing is people are looking to this haptic tool to get people’s attention,” Abergel says. “If they can now personalize that haptic capability with variable data finishing, that’s something that’s not being done today.”

“If you try to stamp plastics, it’s just going to come back down to its original size,” he says. “But it works perfectly with the JETVarnish 3D Web. So now we’re doing flexible packaging that has embossed varnish and embossed foil, and it works because we’re not deforming the actual plastic.”