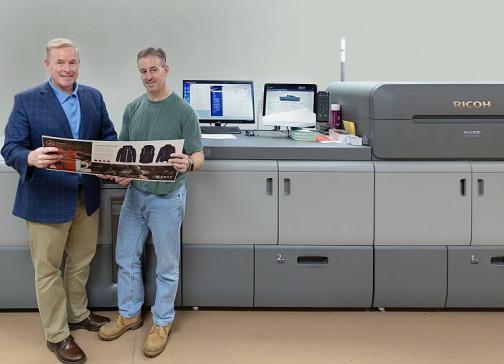 At VISOgraphic, Bob Dahlke Jr. (left) and John Dahlke say the print quality coming out of their Ricoh color digital presses — including the Ricoh Pro C9210 Graphic Arts  Edition model seen here — is equal to that of offset.

The stories of the six printing companies profiled for our Innovators series suggest that when we speak in practical terms about a relentless drive for improved performance, we come nearer to the heart of what “innovation” in the printing business really means.

Bob Dahlke Jr. says that the Addison, Ill.-based commercial printing firm he helps run has progressed “well beyond the point of price, quality and service” as the common denominators of success in the business. At VISOgraphic, competitiveness in all three is a given. The foundation of the 72-year-old company’s strength today is the high efficiency of the hybrid production environment in which it operates. 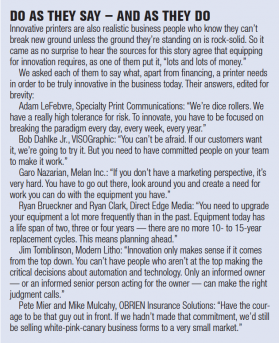 VISOgraphic caters exclusively to a B2B clientele ranging in size, Dahlke notes, “from multinationals to mom-and-pops.” A USPS-certified mail service provider, the family-owned company puts 1.5 million pieces into the mailstream every month in formats that include postcards; fully variable, duplexed self-mailers; and matched mail (consisting of multiple personalized pieces inserted into an envelope that is then addressed).

Dahlke expects packaging — another fast-growing component of the business — to accelerate further with the help of a recently installed LED-UV sheetfed offset press — a 40˝ 10 Series model from RMGT. This machine and other offset equipment produce about 65% of VISOgraphic’s total printed output. The main sources of its digital volume are five Ricoh toner-based sheetfed presses: two each of the Ricoh Pro C9110 and 8210S, and a just-added C9210 Graphic Arts Edition.

A workflow built around rules-based automation keeps all of these platforms topped up with jobs. Orders arriving from customer portals created with EFI’s Digital StoreFront are captured by an EFI Monarch MIS and handed off to its Kodak Prinergy production workflow, which allocates them to the presses. Seamless, touch-free processing is a must for efficiently handling the numerous small orders that enter via the portals, Dahlke notes.

All of this is invisible to VISOgraphic customers, who Dahlke says typically “don’t ask whether it’s being printed digital or litho.” The Monarch MIS can estimate jobs both ways and — with the Ricoh devices, in his opinion, outputting quality that’s equal to conventional offset — the choice comes down more often to scheduling than it does to the look of the printed piece.

But looks still count, and VISOgraphic is flaunting them in the form of output from its RMGT 10 Series press. Installed last November, the machine has logged 20 million impressions on a two-shift schedule that Dahlke may expand to three.

One of its projects was a “look book” of ultra-high-end printed samples, including combinations of substrates and coatings that no one, Dahlke claims, had attempted before. The look book traveled to Japan in July for the IGAS international graphic arts event, where it was used as a showpiece for the advantages of LED-UV offset printing.

As for next steps, Dahlke is considering adding a diecutter to support the expansion of his packaging business. He also thinks the time could be right for an investment in a production inkjet device.

VISOgraphic, however, is getting along quite satisfactorily with the well-coordinated hybrid printing assets it already has. This owes much to the fact that “we have a lot of comfort” in the relationships it maintains with its technology suppliers, Dahlke affirms.