The stories of the six printing companies profiled for our innovators series suggest that when we speak in practical terms about a relentless drive for improved performance, we come nearer to the heart of what “innovation” in the printing business really means. 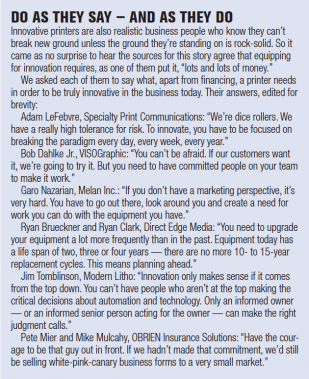 If this offset lithographic printing company hasn’t experienced the kind of digital disruption other companies of its type have had to endure, points out Jim Tomblinson, VP of operations, give a large share of the credit to process automation. A diversified commercial printing business with a specialty in short-run publication printing, Jefferson City, Mo.-based Modern Litho produces magazines and periodicals for clients in nearly all 50 states.

This wasn’t always the case, however. Twenty years ago, says Tomblinson, “we were very local” because accepting files electronically was difficult and getting them into a low-touch workflow was no easier.

Software and software integration made Modern Litho the case study in production efficiency it is today. According to Tomblinson, the company was the first in the U.S. to marry Kodak’s Prinergy workflow and InSite prepress portal with EFI’s Monarch MIS system. He says this combination of file input, preflighting, proofing and platemaking automation has slashed job turnaround times to a point where “it’s not necessarily about saving hours anymore — it’s about minutes and even seconds.”

Recently the company took on an event program project where for four consecutive nights, files came in by 9:00 p.m. and the job was completed and out the door for delivery by 3:30 a.m. the following morning. With the help of automated workflow, the 30,000 booklet covers were plated and put on press while the client was reviewing and approving proofs of the interior content.

“While this is an extreme example, it does demonstrate how we have leveraged technology to maximize throughput speeds,” Tomblinson says.

About 90% of Modern Litho’s output comes from the printing process the company is named for, and Tomblinson doesn’t expect its reliance on the traditional method to change much until there are large-format digital presses that can truly rival conventional offset equipment from a productivity and quality standpoint. He contends that, with streamlined platemaking and fast makereadies on-press, producing short runs conventionally often can be cheaper than running them on a digital platform.

These routines, Tomblinson adds, are also responsible for the fact that while Modern Litho continues to grow, the total headcount in its prepress department remains essentially the same.

Modern Litho is by no means opposed to digital printing; it operates digital presses from Kodak, Ricoh, Canon and Xerox. But it expects as much hands-off efficiency from this side of its business as it does from its offset component. After all, as Tomblinson observes, “if you put very many touches in a digital job, your margin is gone — and the margin isn’t very big to begin with.”