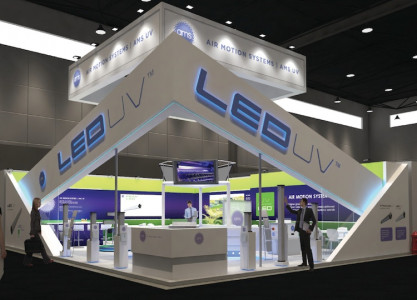 The Air Motion Systems booth as it will appear at drupa 2016.

MultiWave LED-UV Blended Wavelength Modules
At drupa 2016, AMS will commercialize a blended wavelength series LED module called MultiWave LED-UV featuring the industry's first uniform blend of Wide Spectrum UV and LED wavelengths at equivalent power levels, and with a performance range designed for compatibility with many existing UV photo initiator packages, including low-migration formulas. The development means that the ink prices for LED curing can now be similar to those of existing high quality UV inks.

"MultiWave LED-UV is a true industry first," says Steve Metcalf, CEO of AMS. "With MultiWave, AMS offers a single, 100% LED-based solution capable of curing a much broader range of UV and LED inks, varnishes and coatings at the highest performance levels, without reliance on mercury based arc lamps or proprietary, dual-purpose power supplies to assist. Further, MultiWave LED modules are engineered to be plug-compatible with all AMS LED UV systems in use, providing an easy upgrade path for our existing customers."

Based on AMS' award-winning and patented PEAK Optics Dynamic Collimation technology, MultiWave LED modules give printers and converters wider spectrum compatibility with UV inks, varnishes and coatings combined with all the advantages of 100% LED-based curing, including low energy consumption, elimination of mercury and ozone, removal of heat, improved curing consistency, safer operation and elimination of frequent bulb changes. "Drupa 2016 will be all about preparing yourself for the wide spectrum future of LED," adds Carsten Barlebo, managing director of AMS EMEA. "And with the latest from AMS, we and our customers are ready."

MultiWave LED modules are based on the latest high-efficiency (HE), upgradeable diode chipsets from AMS and will be offered in power densities of 12W, 17W and 25W classes, consistent with existing power setups offered by AMS, and capable of reaching the highest production speeds in perfecting and straight mode of machines on the market today. MultiWave modules are available in seamless format widths from narrow up to 2.5 meters (100 inches) for all AMS systems spanning offset, flexo and digital.

LED UV Solution for Low-Pile Sheetfed Presses
At drupa, AMS will further introduce a new low-profile LED module, called the XD Series, for easy conversion of space-restricted machines to LED printing. The development of XD is a result of working closely with partners and customers who requested a smaller-profile design with easy setup for the numerous low-pile sheetfed offset litho presses in use around the world, and for which adequate space in the delivery is not readily available for standard LED drying units.

"XD is a LED printing solution for the many printers who operate 520mm (20-inch) format machines with low pile designs from different manufacturers," relays Carsten Barlebo. "The XD systems come complete with a turnkey start-up package, and are designed for quick installation that can be done oftentimes by the printer themselves, without the expense of onsite technicians."

The XD solution will allow small format presses to more easily take advantage of the growing worldwide trend towards eco-friendly, "offset-on-demand" LED printing, including instant drying and the ability to readily print on many papers and synthetic materials.

XD systems are built around a common, proven LED architecture from AMS that features replaceable, upgradeable chip diodes and operates at the highest level of performance and reliability. Power and control systems are designed for flawless operation even in the most difficult environments, and systems come prepared with internet-based remote diagnostics.

High Power Air-Cooled LED UV Modules
At drupa, AMS will further unveil an all-new, extendable, high-power Air-Cooled LED UV architecture designed for machines and applications where air-cooling can be realized into the space of the machine. The modules, known as the X-AIR Series, will offer a central connection to a blower manifold instead of relying on a series of onboard fans, which take up space and can lead to maintenance issues. The vastly improved cooling efficiency in a rugged, extruded housing also enables much wider, and seamlessly extendable format sizes for Air-Cooled LED applications than previously possible.

"Existing air-cooled LED UV designs on the market are beset with challenges for machine integration," notes Metcalf. "When fan-based modules are positioned end-to-end to create larger curing widths, energy drops off at the seams causing drying inconsistencies, such as striping and noticeable gloss-level changes. This doesn't work for most applications, where total curing uniformity is a must. The AMS X-AIR systems offer seamless output up to lengths of 2 meters (80 inches) without loss of energy across the media. Another advantage is that we can economically deploy a centralized blower to a multi-lamp setup, similar to traditional air-cooled UV architectures."

The X-AIR modules will come standard with AMS upgradeable and replaceable high power chip diodes, deliver outstanding working distance, and can be ordered in any format width for uniform output, eliminating the need to position multiple, small LED units end-to-end. With X-AIR, the power and control architecture is also greatly simplified, as each module requires a single dedicated driver to operate.

LED UV Satisfaction Guarantee
Based on its track record and focus on LED UV instead of hybrid systems, AMS is the first major LED UV provider to extend a 100% Satisfaction Guarantee on the LED printing process across all standard applications. In short, AMS guarantees the LED curing system, the LED curing process and top performance of the LED machine, or money is returned to the investor. The guarantee is a direct result of helping so many customers around the world achieve success with LED UV.

About Air Motion Systems
AMS LED solutions are #1 worldwide based on installed figures in the graphic arts industry of high power (12W and greater) LED UV systems spanning offset, flexo and digital applications at 250mm and greater curing widths. "With each site we bring into production (currently more than 250 large High Power LED installations worldwide adding several every week), the experience base in our LED platform expands, allowing us to offer the world's most secure and hassle-free transition to LED printing" added Barlebo. "And AMS is the first provider to offer a 100% Satisfaction Guarantee on the LED printing process on all of our systems."

AMS Stand at drupa 2016
AMS will showcase all of its products, as well as numerous examples of LED UV printed quality, substrate variations, special effects and customer successes at its 115-square-meter (1,200-square-foot) stand in Hall 14, Booth 71 at drupa between May 31 and June 10 in Duesseldorf, Germany. Additionally, AMS LED UV will be running live and on display at partners ranging from KBA, Flexotechnica, BOBST, Uteco, OMET, INX Digital, Argos and Flint Group among others. AMS will announce further LED UV activities and strategic partnerships at a drupa press conference May 30 May in Düsseldorf.