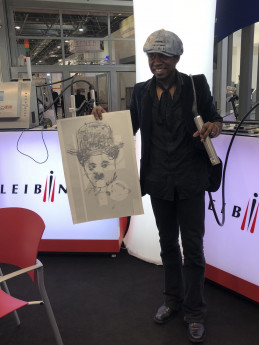 One of the most unusual brushes in the world: Francis Nathan Abiamba painted a portrait of Charlie Chaplin with the JET3up’s inkjet head.

TUTTLINGEN, Germany - April 25, 2018 - Are continuous inkjet (CIJ) printers only useful for commercial industrial applications? Certainly not, as artist Francis Nathan Abiamba recently proved. The artist from Cameroon spontaneously used a printhead from Paul Leibinger GmbH & Co. KG as a brush - and amazed visitors at a recent trade fair in Düsseldorf, Germany, with a portrait of Charlie Chaplin.

Abiamba, known in the art world as Afran, had a booth at the wire and Tube 2018 trade fair and it happened to be right next to the Leibinger booth. “We started talking and we suddenly had the crazy idea of using a printhead as a brush,” recalls Christina Leibinger, Managing Proprietor of the Paul Leibinger GmbH & Co. KG. Usually, the JET3up printer’s cylindrical printhead is mounted on a conveyor belt or behind an extruder and connected to the hydraulics in the printer housing via an umbilical. “Abiamba just picked up the printhead, threw the umbilical line over his shoulder, and used the back of a fair poster as his canvas.”

“A Day Without Laughter Is a Day Wasted”

Abiamba had only briefly practiced with the printhead. It was, after all, the most unusual brush the artist had ever worked with. Then the show began: the artist painted a portrait of the British comedian Charlie Chaplin. In no time at all, using the silver electric paintbrush, he captured the distinguishing features of the film icon on paper - including his bowler hat and famous two-finger mustache. “Everyone at the booth was impressed and the magical performance brought many a smile to the audience,” raved Leibinger. “The portrait in silver is absolutely stunning and will be given a place of honor at our company headquarters in Tuttlingen.” Chaplin himself would have enjoyed the performance. One of his most famous quotes is: A day without laughter is a day wasted.

How can you use a printhead as a brush? CIJ technology on the inside makes it possible. Up to 120,000 electrically charged ink drops shoot through a tiny nozzle per second in the direction of a collecting tube. When printing, two deflection electrodes come into play. They change the trajectory of individual drops, so that they land as a pixel on the product surface - the remaining drops fly into a catcher tube and circulate in the system. Abiamba did not even have to touch the paper while painting. 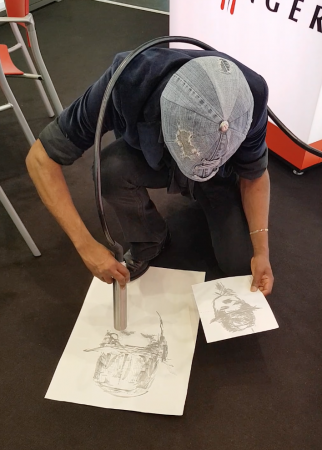 Abiamba at work: the artist paints with flying drops of ink - without ever touching the paper.

About Francis Nathan Abiamba, the Artist

Francis Nathan Abiamba was born in 1987 in Bidjap, Cameroon. He first graduated in ceramics at the Fine Art Institute in Mbalmayo in Cameroon, and then studied contemporary art in Bergamo, Italy, in 2006. The artist still lives there today. His studio is located in Pescate - 45 kilometers northeast of Milan. His work includes paintings, drawings and sculptures that can be admired all over the world - and especially in Spain, Italy, Cameroon and Equatorial Guinea.

The Need to Invest in Production Inkjet Technology