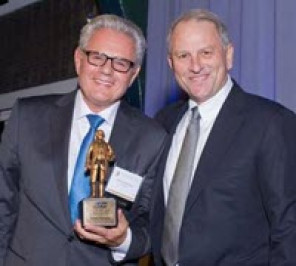 ALEXANDRIA, Va. — November 2, 2016 — Idealliance and Printing Industries Alliance played host to more than 350 attendees at the annual Franklin Luminaire Awards at The Lighthouse at Chelsea Piers, New York, N.Y., on Oct. 19. The gala event featured a presentation of the 2016 Luminaire Awards, the 2016 Zenger Community Service Medal, and the inaugural Innovation Excellence Awards. A highlight of the evening was the presentation of the 2016 Franklin Award for Distinguished Service to noted journalist, author, and 60 Minutes correspondent Armen Keteyian.

“I’d like to thank Printing Industries Alliance and Idealliance for this incredible honor,” said Keteyian in accepting the award. “This is the first time in my 35 years of working at the highest levels of journalism that the collective sum of my work has been honored — and to be singled out by a group like this, it simply means the world to me.”

Keteyian noted that among the books he read in the eighth grade was a biography of Ben Franklin and that it was his love of reading that led to his love of writing. He is the author of several books and scores of reports, including exceptional investigative journalism and sports reporting that have won him 11 Emmy Awards during his distinguished broadcasting career.

"In today’s 24/7 media madness, especially in the worlds of politics and sports, you’re judged by what comes out of your mouth," he added. "Trust, integrity and fairness, those words mean everything to me." Keteyian recalled being called an "uncommon reporter" by an interview subject and said, "I cherish this award because those who preceded me epitomize the word uncommon — Walter Cronkite, John Glenn, James Michener, Margaret Mead. Thank you for this uncommon award and inspiring me to reach even higher ground in the only place I’ve ever wanted to work, journalism."

“We were gratified to have such a great turnout for this year’s Franklin Luminaire Awards and to have this opportunity to honor such a distinguished group of honorees,” notes Idealliance President and CEO David J. Steinhardt. “What makes this event special is that it both recognizes the accomplishments of those who have brought the industry to its current position and honors those whose work will continue to drive its future development in new and innovative ways.”

“Each year, the Franklin Luminaire Awards program brings together people from across the entire spectrum of the graphic communications industry who understand the vital role our industry plays and who are committed to continuing its growth and progress by supporting career development opportunities for future generations,” adds Steve Drew, co-chair of the 2016 Luminaire Awards Committee. “Meghan Milkowski and I were privileged to serve as co-chairs of this year’s program. We hope that even more industry leaders will join us at this exciting and inspiring event in 2017.”

About Idealliance
Idealliance is a not-for-profit member association representing a unique convergence of printers, mailers, marketers, brand owners, agencies, publishers, fulfillment services, material suppliers, and technology providers. The association provides an open and cross-industry platform for motivated professionals to come together to create a more competitive, compelling, and innovative graphic and visual communications industry. It capitalizes on its integrated capabilities to advance proven technical and management best practices; deliver best-in-class research, education, and certification; and serve as a united industry advocate. Idealliance is headquartered at 1800 Diagonal Road, Suite 320, Alexandria, Va., 22314.

Have a Safe Thanksgiving