Owner and Founder of The AngstromGroup, Wayne R. Angstrom, Passes at Age 82 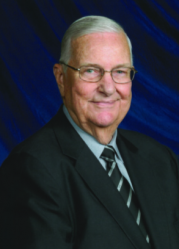 Wayne R. Angstrom, 82, of North Royalton, OH, a pioneer of the printing industry and owner of The AngstromGroup, passed away at his home, surrounded by family, on Monday, November 22, following a brief illness. A native of Chicago, Wayne was preceded in death by his father, Raymond Angstrom; his mother, Dorothy Kilroe; and his step-father, Gene Kilroe. He is survived by his wife of 58 years, Sandra (Weber) Angstrom; his children, Mark Angstrom, Boca Raton, FL; Carl (Anne) Angstrom, Naples, FL; David (Jen) Angstrom, Arvada, CO; and Kristina (David) Neumann, Broadview Heights, OH; 10 grandchildren, Sofia and Mark (Mark); Colin and Catherine (Carl/Anne); Audrey and Evan (David/Jen); and Jack, Henry, Sam, and Lily (Kristina/David); and one great-grandchild, Echo (Audrey).

A respected leader in the printing industry, Wayne was the Chairman and owner of The AngstromGroup. In addition to a lifetime of service, Wayne was an active and faithful member of St. Matthew’s Episcopal Church in Brecksville, OH, and St. Gregory’s Episcopal Church in Boca Raton, FL. Wayne will be remembered by those who knew him for his kindness, graciousness, humor, leadership, service, faith, humility, and strength. Wayne’s love for and commitment to his family, his extended family, and his friends endures.

Sandy Angstrom, Wayne’s devoted wife of 58 years, will assume the position of Chairwoman of AngstromGroup, continuing her involvement in the company since its founding. The daily operation of the company and its three divisions will continue to be run by David Angstrom and David Neumann, along with their wives Jen Angstrom and Kristina Neumann. Carl and Mark Angstrom will continue to serve as board members, with Carl Angstrom, David Angstrom, and David Neumann assuming the roles of Vice Chairmen.

Wayne’s commitment to this industry, this company, its team members, and our customers was unwavering, and the AngstromGroup will continue that commitment for many years to come, building upon the foundation established by our patriarch.

Returning from the United States Marine Corps., Wayne began working in the printing industry “checking inks” with RR Donnelley and Sons in Chicago, the largest commercial printing company in the U.S. and Canada at the time. He received a Business Administration Degree from Chicago City College and attended night school at Northwestern University in Chicago.

Through hard work, he advanced at RR Donnelley to Division Director, responsible for two printing plants. Following this, he became Executive VP of Manufacturing for Maxwell Graphics (USA). Maxwell Graphics (USA), a start-up company, became the second largest commercial printing company in the U.S. and Canada, with headquarters in Greenwich, CT; Boston; and St. Paul, MN. Maxwell Graphics (USA) was eventually acquired by Quebecor Printing in Canada and is now part of Quad/Graphics.

After a year sabbatical in Minnesota, Wayne took on the responsibility of President and CEO of St. Ives US Division in Hollywood, FL. St. Ives U.S. Divison acquired Perlmuter Printing in Cleveland, as well as Avanti/Case-Hoyt during Wayne's leadership.

In January of 2009, rather than retire, he purchased the U.S. interests of St. Ives, founding AngstromGraphics, now The AngstromGroup. Today, The AngstromGroup stands as the 124th Largest Commercial Printing Company in the U.S. and Canada (per the 2020 Printing Impressions 350 ranking) with headquarters in Cleveland (Cuyahoga Heights), Ohio.

The company is operated by my brother-law, Dave Neumann; brothers Carl and David Angstrom; (three vice-chairman and their wives, Kristina, my sister, and sisters-in-law, Anne and Jen); along with an exceptional team of industry veterans.

My mother, Sandra Angstrom, now company Chair at The Angstrom Group leads an incredible team dedicated to customer success and, by all measure, the company is thriving in an industry experiencing rapid change and technological advancement.