ST. LOUIS — August 8, 2017 — AMS SPECTRAL UV — A Baldwin Technology Company will showcase its leading LED-UV curing technologies at the upcoming PRINT 17 exposition, set for Sept. 10-14, 2017, at McCormick Place in Chicago. The company, which was formed in early 2017 by combining Air Motion Systems Inc. with the UV and IR divisions of Baldwin Technology Company Inc., is excited to reintroduce its new-but-familiar brand and products to the North American market.

“We are looking forward to speaking with printers who want to add LED-UV curing to their presses,” said Steve Metcalf, President of AMS SPECTRAL UV. “We’ve seen our installed base more than double in the last two years, and know we are still in the early stages of getting our systems to those who would most benefit from them. It’s exciting to be on the cutting edge of a technology that is both in-demand, yet still making its way to the operators who need it most.” 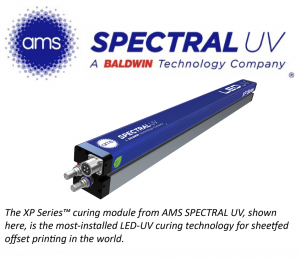 AMS SPECTRAL UV manufactures three main LED-UV curing lines: the XP (Extendable Profile) Series, the XD (Extendable Direct Energy) Series and the XO Series. The XP Series is the dominant LED curing system for retrofits and OEMs in the sheetfed offset printing market. It offers a host of benefits over conventional UV curing and IR drying methods, including “instantly dry” sheets, energy savings, a heatless process and more. The XO Series provides unique optic abilities for high-stress industrial settings, and the XD Series is an affordable option for integrating LED-UV curing into machines of all sizes.

“LED curing is surpassing our customers’ original expectations, not only by helping them expand their product offerings, but by providing a better return on investment than forecasted,” commented AMS SPECTRAL UV’s Hans Ulland, Vice President of Sales. “It’s a true game-changer for those with long perfectors, and for printers specializing in heat-sensitive substrates. LED curing is being rapidly adopted by both folding-carton and standard commercial printers as a more efficient process with a quicker payback.”

AMS SPECTRAL UV will host booth 3007 at PRINT 17, located near the entrance of the event. Samples of LED-cured print pieces will be available for review, as will examples of LED-UV modules.