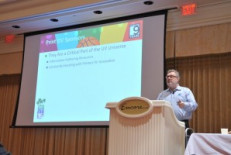 LAS VEGAS — April 6, 2016 — After nine consecutive years as a Platinum Sponsor of the Annual Print UV conference, Air Motion Systems (AMS), reports that Print UV 2016 reached an entirely new level of value due to the in-depth content of presentations and a record number of attendees that amplified networking opportunities. 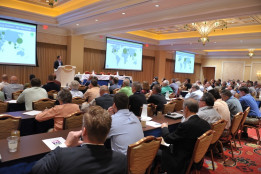 A record number of attendees turned out to Print UV 2016 to hear President and CEO of AMS Steve Metcalf.

Hans Ulland, VP of sales at AMS, gave a presentation titled “Designing the Culture of Value-Added Process Development” that shared insight into the four key steps of being intentionally fearless in the pressroom as defined by leading printers. “I sent a questionnaire to some of the most innovative printers I have been lucky enough to know, and the amount of fearless feedback I received was astonishing!” shared Ulland.

President and CEO of AMS Steve Metcalf opened the conference by discussing technology innovation and market trends with his presentation “From UV to LED, Curing Innovations March Forward.” He said, “The conference remains an unmatched international knowledge base that continues to evolve with the industry. We are already looking forward to returning as a Platinum Sponsor in 2017."

To learn more about the annual Print UV Conference and to see pictures from Print UV 2016 visit the website at www.printuv.com.

About Air Motion Systems
Air Motion Systems (AMS) is the world’s leading manufacturer of high power UV and LED UV curing systems for the print industry with a worldwide network that specializes in AMS LED UV technology. AMS is the exclusive Platinum Sponsor for Converters Expo on April 13-14, 2016, at booth 313 and will be exhibiting at Drupa 2016 in Hall 14, Stand 71.