Printers wishing they had a brand-new sheetfed press equipped with today’s most advanced technologies are finding it easier than ever to retrofit existing equipment so that it boasts the same capabilities a new press would; this is especially true when it comes to LED-UV curing technology, according to Steve Metcalf of AMS Spectral UV (Booth 3007), a company that manufactures next-generation UV and LED-UV curing equipment for sheetfed offset printing and other applications. 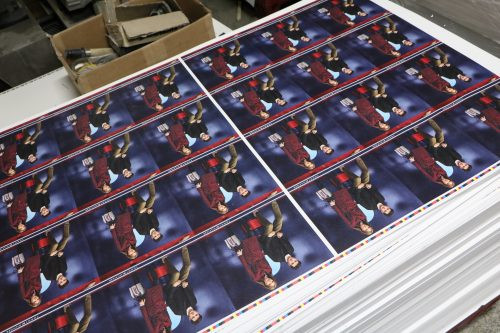 Printers who currently use IR drying and conventional UV curing to solidify inks and coatings often say they use these methods because LED-UV technology powerful enough to achieve the results they’ve needed has only been available for a few years—it wasn’t available when they purchased the press initially, and the idea of retrofitting existing equipment is something they’ve only begun to consider.

According to AMS, more and more sheetfed printers are deciding to invest in LED curing technology in a retrofit capacity, because it offers a host of benefits that are unattainable with the older technologies, making it possible to achieve “new press” results. To a large extent, LED technology already has surpassed the capabilities of IR and conventional UV setups in many ways.

“Those printing on a sheetfed offset press equipped with LED do not use spray powder, because sheets are instantly dry. Their press stays cooler. They don’t worry about marking or offsetting, and they save copious amounts of money on energy costs every day they operate,” says Metcalf. “Their turnaround times get shorter, the color quality of their products improves…they can use new coating effects and print higher-end work, they only see benefits. The value that LED curing adds to any print setup is still being measured, with new benefits being realized by savvy adopters every day.”

When comparing LED to conventional UV curing, one of the greatest benefits is the life of the light source: while mercury-arc bulbs need to be replaced every 2,000 hours, LED-based systems can operate more than 20,000 hours before degrading to the point they need replacement. Over time, this saves copious hours that would otherwise be spent on maintenance, and returns them to production time.

Additionally, LED curing modules do not release ozone as a byproduct, and do not contain mercury—two driving environmental factors that make printers seeking to become more environmentally friendly with their operations more interested in LED technology than ever before.