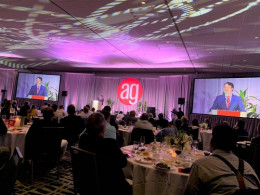 AlphaGraphics honored its top franchisees during the company's annual conference in San Diego. On-screen is Ryan Farris, COO and president of AlphaGraphics.

AlphaGraphics, a leading franchisor of printing and marketing solutions, honored its top franchisees during the company’s annual conference recently. The leading print franchise celebrated its 51st anniversary in San Diego, California, with an in-person event that welcomed 225 people.

“After a yearlong virtual journey, both the senior management team and the franchisees were excited to meet in person,” said Bill McPherson, vice president of franchise development. “The past year was difficult because of our inability to network and connect in-person with one another, but we made tremendous strides in our growth that were unmatched in previous years. So, this year’s conference offered the perfect opportunity to celebrate the achievements of the top franchisees among the AlphaGraphics family.”

Rising Star: Rob Barnett (Suwanee, Georgia)
A franchisee with 30 years in finance and leading sales teams, Barnett was chosen for the award because of his ability to inject renewed passion into the chemistry of his team while quickly becoming a leader in the southeast region.

Most Improved: Steven Service (Rochester, New York)
An owner of an AlphaGraphics location since 2013, Service was chosen because his goal is to always meet customer’s expectations by providing value and solutions without sacrificing high standards and quality.

Project of the Year: Phil Davis and Lynn Nelson (American Fork, Utah)
Davis and Nelson tackled a task for MX, a financial technology data company, that required them to deliver a packaging that would “speak for itself.” The center did just that by creating a box with an embedded video player that automatically started playing when it was opened.

Community Impact: A.B. Barrera and Paco Barrientos (Laredo, Texas)
Barrera and Barrientos, along with the Laredo staff, helped slow the spread of COVID-19 in their community by partnering with the Laredo Mask Coalition. The organization launched a city-wide public service media campaign encouraging people to wear their masks. AlphaGraphics Laredo donated their services to the cause.

Community Advocacy: Johanna Higginson (West Jordan, Utah)
Higginson gave two former inmates a chance when she hired them to work in her center. The two prospective employees showed enthusiasm and had relevant experience at the prison’s print facility. They continue to work in the center.