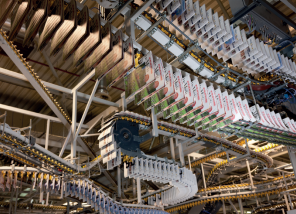 MORTSEL, Belgium - September 7, 2018 - Eleven years after the worldwide launch of the first chem-free violet newspaper CtP plate, Agfa Graphics launches Avatar V-ZH, which does not require pre-heating. The plate marks the next milestone in terms of economic and ecological platemaking.

Based on its customers’ successful experience with its violet chem-free printing plates Agfa developed a new plate technology that meets the demand of newspaper printers to streamline production processes further and to reduce machine maintenance.

The Avatar V-ZH plate requires no pre-heating unit, which reduces printers’ capital expenditure and energy consumption, while gaining them floor space. In addition, the decrease of start-up time and waste during make-ready, as well as stability and linearity throughout the entire print run, empower the daily production.

Avatar V-ZH has a very high image contrast after clean-out, allowing a visual image inspection to avoid mix-ups on press. Other features that make the plate a great fit for newspaper printers are its daylight compatibility, high scratch resistance, and outstanding robustness on press (run length, dot gain, press start-up). The plate is flexible, as it can be used with either conventional or UV inks for semi-commercial or special applications.

Avatar Z-VH is suited for high-quality Arkitex Sublima screening. Using it with Arkitex OptiInk software will result in a more economical use of ink, higher color fidelity, and improved make-ready time with less paper waste.

Rainer Kirschke, Market Manager Newspapers Agfa Graphics: “Violet-laser technology makes up the majority of the newspaper market. We have a worldwide base of customers who have been using our violet chem-free plates for more than a decade. During the development of Avatar V-ZH we carefully listened to their remarks, and we made every effort to bring maximum economic and ecological benefits to their production.”

Avatar V-ZH works with all violet CtP units currently in use at newspaper print sites across the world. During exposure, the violet-laser diode triggers the polymerization of the image area. Subsequently, the plate is gummed in the clean-out unit with a dedicated gum, which removes the soft, unexposed non-image areas in an easy and clean way. A LED bar close to the drying section takes care of the final curing of the plate.

The Attiro ZH is characterized by minimal gum consumption for maximal clean-out effect. Its extensive bath life results in lower maintenance, while cleaning is easy and fast. A completely flat plate transport means no buckling of plates between rollers.

Existing Agfa clean-out units can easily be upgraded to the preheat-free version.

Rainer Kirschke concludes: “Agfa is strongly investing in new products for the newspaper market, because we believe in the future of printed news. Newspapers face a very difficult decade where every kind of cost saving and process streamlining is crucial. Our ECO³ portfolio combines software, hardware and support that cover every part of a newspaper’s production, from image tuning up to the press run. Like that, newspapers can speed up and streamline their operations and achieve a ‘just-in-time’ workflow.”

Over the last months, Avatar V-ZH proved its stability and robustness as it was put through its paces under a range of challenging printing conditions in real newspaper production environments. These first users reported up to 60% energy saving compared to processors and COUs running with preheat. The plate will make its global debut at the IFRA World Publishing Expo 2018 in October and will be worldwide available early Q4 2018.