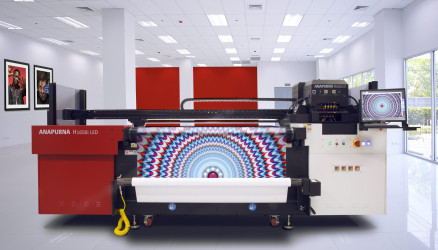 MORTSEL, Belgium - February 6, 2018 - Coming in February, Agfa Graphics is expanding its wide-format hybrid for sign and display professionals with a new 1.65 m-wide hybrid printer - the Anapurna H1650i LED. This smaller hybrid printer was designed as an accessible and cost-effective production tool that combines the latest LED technology with Agfa Graphics’ signature high-quality output. The Anapurna H1650i LED will be revealed to the public at C!Print Lyon (France), which takes place from February 6-8, 2018.

The latest addition to the Anapurna LED series - the Anapurna H1650i LED - is a smaller version of the popular and robust Anapurna H2050i LED printer, with which it shares several features and benefits. Like its bigger brother, the new Anapurna prints on rigid and flexible media by means of LED curing, resulting in a lower cost of ownership. It combines this with Agfa’s award-winning imaging quality, ink-saving thin ink layer technology and perfect white ink printing reliability, yet requires a smaller financial investment than other Anapurna engines.

“The hybrid Anapurna H1650i LED printer was designed as a robust, qualitative and versatile entry-level option for wide-format print service providers,” explains Philip Van der Auwera, product manager at Agfa Graphics. “Although smaller, it is equipped with features normally reserved for higher-end printers, such as automatic head height measurement, crash prevention and an anti-static bar, thus offering the very best at a reasonable price. Of course, the Anapurna H1650i LED is driven by Asanti as well, which adds to the resulting high-quality and consistent prints.”