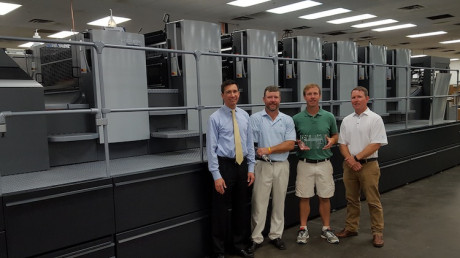 KENNESAW, Ga. — March 16, 2017 — Chattanooga, Tenn.-based Adams Lithographing Company is experiencing a surplus of production benefits throughout its pressroom with the recent installation of a Speedmaster CD 102-6+L with X-Package and UV.

“The press is perfect for handling our very tight turnaround times and highly critical jobs,” said Wyatt Hogue, Vice President and Partner. “We were very impressed with the productivity from our older CD 102 presses, but this technology is even better. What we produced in 2 1/2 shifts on our old press, now only takes 1 shift with the new machine.”

The Speedmaster CD 102 with X-Package is proving to be one of the best value presses in the market based on its price point and ability to deliver up to 40 million impressions per year. On a cost per sheet basis, it beats any competitive press — maximizing the profit potential of its output.

According to Hogue, the Preset Plus feeder and delivery are game-changing features that make the CD 102-X stand out over older and competitive models. “The [Preset Plus] technology matches that of Heidelberg’s XL series, which is a huge plus for us,” said Hogue. “Our makeready times have improved greatly and our waste is reduced because of these features.”

Packed Portfolio
The strategic investment also indicates the company’s entrance into the UV market — a vision Hogue has sought to fulfill since its 2008 press acquisition. “Our current customers weren’t requesting UV, but we wanted to magnify our gamut of value-added services, allowing us to offer those customers standout pieces with exceptional quality.”

Now that the company has extended its already impressive portfolio, the commercial printer has attracted new business opportunities and expanded its clientele. “Within a month of being up and running, we’ve already received several jobs that we would not have been able to produce previously.”

Full Suite, Peak Production
Aside from ample success in its pressroom, the company is also reaping the cost-effective benefits from it recently upgraded postpress department. Just last year, the commercial printer installed a Stahlfolder BH 82 with a VSA delivery, which runs 60% faster than its previous machine and has reduced labor costs by only requiring one operator instead of two. Running alongside the Stahlfolder is a range of POLAR equipment including a POLAR 137 high-speed cutting system.

“Each piece of equipment works together at every stage of production to ensure we can produce all of our work in-house,” said Hogue. “We continue to count on Heidelberg to provide the best combination of solutions for our business.”

For over a century, Adams Lithographing Company has cultivated a customer experience of high craftsmanship, reliability and unparalleled service. As Chattanooga's first FSC certified printer, the company has reduced waste, increased efficiency and maximized resources as a part of its preparation for a strong future. Adams has consistently crafted quality print products for a diverse spectrum of clients.