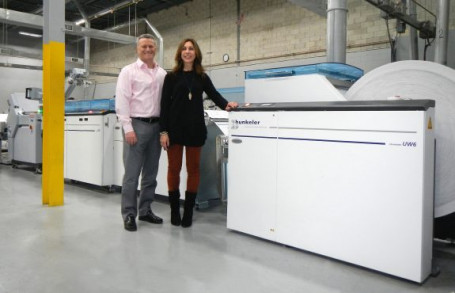 ANDOVER, Mass. - January 22, 2018 - Access Direct, a Farmingdale, N.Y.-based direct mail and marketing service company, recently reported throughput on their five Standard Hunkeler/Horizon Roll-to-Fold solutions and the numbers are astonishing. The company processed 595,703,212 linear feet on these systems in 2017 alone, enough paper to circumnavigate the globe 4.5 times! These production numbers are even more remarkable when you consider that the company started their digital operation only four years ago.

In 2013, Access Direct began their transition to inkjet technology with the purchase of two Canon ColorStream 3900 presses. Due to the success and efficiency they experienced with these initial devices, they added four duplex ColorStreams along with a Canon VarioPrint i300 cut sheet printer within just one year. From there, Access Direct quickly recognized the need to upgrade and transition the finishing department to support the volume being produced on the new presses. After a thorough search for a solution to unwind, cut, and fold the printed media, Access Direct ultimately decided on the Hunkeler/Horizon Roll-to-Fold direct mail line from Standard.

“After installing our first Standard line, we saw the tremendous value this equipment had in growing our business and we knew we had to keep that momentum going, both on the inkjet side and the finishing end,” says John DiNozzi, president at Access Direct. Impressed with the results of the Standard equipment, it wasn’t long before Access Direct purchased and installed four additional Standard Hunkeler/Horizon roll-fed direct mail lines.

By the end of 2017, consistent with their mission to employ the latest technology, Access Direct had again expanded their inkjet portfolio, adding two ColorStream 6900s to their fleet and retiring two of the early machines. The continuous feed Canon presses are configured in-line with Hunkeler Roll-to-Roll technology, capable of printing full color MICR duplex to double their production capacity.

The Roll-to-Fold lines at Access Direct seamlessly integrate Hunkeler’s superior unwinding and cutting technology with Horizon’s legendary folding capabilities. The Horizon AF-566 Folder at the end of the solution can also be taken offline and used to process cut-sheet work. According to DiNozzi, the system offers the benefit of having one complete solution from a single, trusted supplier, resulting in what has been superior service and support from the first day of operation. Access Direct also houses a Standard Horizon CRA-36 Creaser so they can affordably perforate their own paper instead of using more costly, pre-perforated stock.

“The flexibility of the Standard Hunkeler/Horizon solution allows us to continue expanding capabilities within our two most important niches of direct mail and transactional print,” says Lori Messina, Executive Vice President at Access Direct. “When you’re mailing over one billion pieces annually, there’s no room for inefficiency.”

The company has dramatically transitioned the printing department over the last three years - now focusing in on the inserting department, where eight new Bell and Howell high speed inserters have been deployed - and DiNozzi emphasizes a continued commitment to investing in the best technology available.

He adds, “The uptime on these solutions and ease of maintenance really streamline the whole operation, and that has allowed us to reach the production levels we did in 2017. Not only is the equipment reliable, but so are the teams at Standard, Hunkeler, and Horizon. That partnership has been key to our success this year.”