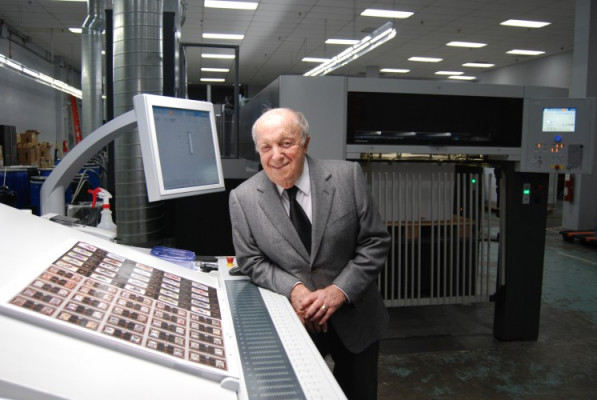 Julius Miller, the 94-year-old founder of Rex 3 in Sunrise, Fla., stands with a press sheet of sports trading cards. 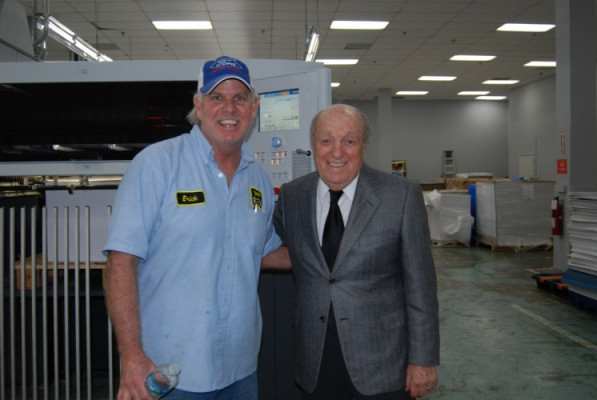 In 1959, when Julius Miller started Sunrise, Florida-based Rex Engraving, he never imagined that nearly 60 years later the company would still be thriving, let alone that he would still be coming into the office every day. And yet, at 94 years old, Julius Miller admits that it’s his passion for the industry that has kept him, and the firm, now called Rex 3, going after all these years.

Rex 3’s growth and longevity are no accident; it can be directly attributed to the company’s leaders taking risks and listening to the needs of customers.

“It’s our ability to adapt to change,” says Howard Shusterman, COO of Rex 3, and nephew to Julius Miller.

The proof lies in the fact that Rex 3 has evolved to keep pace with the ever-changing printing industry. Rex Engraving initially specialized in rubber and copper plates, and zinc engraving for newspapers. Eventually, as it morphed into a prepress house, it realized the need in the 1970s to add a printing press to generate wet proofs for clients. Although there was a customer-driven need for wet proofing, there was plenty of downtime between jobs. That’s when the company opted to enter the commercial printing market to grow its sales.

However, when desktop publishing became popular in the 1980s, Rex 3 realized that it needed to evolve again. With the advent of desktop publishing, industry demand for color separations became something of the past.

That’s when Rex 3 began to embrace other value-added services. It expanded into warehousing, fulfillment distribution, mailing — with a focus on direct mail initiatives — as well as digital printing and digital asset management. Rex 3 began to morph into the diverse company it is today, picking up more clients along the way.

By the mid-2000s, Rex 3 no longer considered itself a printer — it became a technology company, a far cry from the engraving business Julius Miller started in 1959. The company decided that if it was going to stay afloat in the digital age, it needed to address issues affecting its customers. It was evident to Miller and his team that many customers needed workflow efficiency solutions, so it began to hire software developers.

“If we did not do what we did, we would probably not be in business today. We were very aggressive in trying to capitalize on developing software,” Schusterman notes.

In 2009, one of the biggest opportunities came by way of The Topps Co., the iconic provider of sports trading cards and other collectibles. Around that time, the company was still producing its trading cards in a traditional way. Rex 3 developed software to automate the production of Topps’ trading cards to increase efficiency.

Shusterman explains that software was developed “where everything was done on-the-fly with no human intervention.” In other words, operators would no longer need to pore over every step of the production process.

Around the same time, Rex 3 entered into an agreement with the cruise line brand Royal Caribbean. Out of the two segments of the cruise line industry — sales and marketing, and hotel operations — Rex 3 inked a deal with Royal Caribbean to produce all of the printed products for its hotel operations, which includes every casino slip, medical form and anything printed for the cabins. Rex 3 created software to integrate the cruise line’s inventory into its purchasing systems. Rex 3 also automated the inventory ordering for 29 ships worldwide, across seven ship classes — which included 264 different printed products used aboard the ships — by developing automated triggers to reprint materials based on usage.

“This was at a time when we felt we needed to expand our markets,” Shusterman says, “to become a full-service marketing communications company.”

This market growth allowed Rex 3 to become more than just a printer, which has led to the sustainability of Julius Miller’s vision that began almost 60 years ago. When the economy collapsed in 2008 and many companies were forced to close their doors, it was Rex 3’s expansion into software development coinciding with the digital expansion that enabled the company to hold on.

With practically six decades behind it, Rex 3 continues to grow and evolve, having just added a custom-configured Heidelberg Speedmaster XL 106 in December to produce commercial print and packaging products. The new, six-color offset press has the capability to print on a variety of substrates at speeds up to 18,000 sheets/hr., and significantly increases efficiency and decreases waste. The new Heidelberg — which the company dubbed The SuperPress — joins two existing six-color, 41˝ Komori presses.

“We looked at Heidelberg as being a leading press manufacturer, so if we consider ourselves leaders in the industry, we need to partner with other leaders,” Julius Miller states.

Although Rex 3 has seen continued growth throughout the past decade, it doesn’t see itself slowing down in the future. Rex 3’s plan for 2016 includes the addition of another digital press, although the make and model have not been decided upon yet.

If there’s one thing that is for certain in the future, it’s that the company will continue to rely on the loyalty and dedication of its 200 employees. Rex 3 truly fits the definition of a “family business.” Julius Miller’s son Steve Miller was named CEO in 1963, a position he still holds to this day. In 1969 Shusterman made the move from Brooklyn, N.Y., to Florida to attend Jacksonville University and, when he graduated in 1973, he too joined the business. He adds that Rex 3 has a very low turnover rate and that four of his college roommates still work for the company.

“It’s about the people; probably 50% have been with the company for more than 25 years,” he says. “We have lifers here and our success is attributed to the dedication and the support that we get from our employees.”

It doesn’t hurt that the company’s founder — a golfer and self-proclaimed singer who was on the radio as a child — still shows up for work every day. Julius Miller is excited to see what the future holds for Rex 3 in terms of technological advancements. He is most proud of the employees who have helped to build a tight-knit community and foster an environment of success.

“The culture is very unique. It starts with the old man running around picking scrap up off the floor...it’s the family business that sends out a message,” Shusterman concludes. “We consider everyone in our organization family.” PI