A Look at Progressive Impressions International's Approach to Digital Finishing 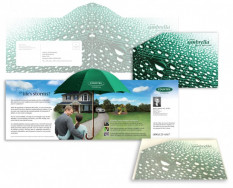 Pii has produced many pieces with creative folding, including this one for Country Financial insurance.

The finishing department must have been an invention of Walt Disney. Sure, the press does all of the heavy lifting, sweating through various run lengths, but there’s something that happens between the time the piece is printed and later boxed or inserted.

Finishing is the time when the magic happens. Instead of Tinker Bell with a magical wand, it’s Ted with a folder and a tattoo crawling up the side of his face. But this is not about Ted, this is a conversation about finishing in a toner and inkjet digital cutsheet printing environment.

We’ve rustled up several printers from across the country to gauge their approach to finishing and perhaps share a story about a given project that truly raised the bar once the finishing touches were applied. Second up in the four-part series Progressive Impressions International (pii).

According to Tim Henning, general manager of pii, the company is not beholden to any one digital printing/finishing workflow, utilizing in-line, off-line and near-line, depending upon the scenario. “If it’s a very specialized production line, where we’re going to be running the same type of application day in and day out, we would favor an in-line solution if the speeds match up and downstream finishing won’t interfere with the more expensive component in the digital press,” he says.

A near-line approach is ideal for pii, enabling the press operator to simultaneously handle the diecutter or UV coater, for example. But there are instances where it just makes more sense to be off-line, as in the case of high-speed folding. “This is where it doesn’t make sense to try to cram a bunch of equipment into a work cell,” Henning says.

The company has made recent investments in diecutting, plow folding and gluing. Some of the more unique projects go through a folder/gluer, where it provides the type of folds that couldn’t be done on a traditional buckle folder. Feeding the finish line is an array of presses, led by a new Canon Océ VarioPrint i300 cutsheet inkjet press, Xerox iGen4 and 150 models, and several Konica Minolta bizhub PRESS 7000s.

Henning points out that one of the challenges encountered by the production crew is the new-school electronics of today’s digital presses as opposed to the iron-and-grease nature of legacy equipment. Pii itself is transitioning into newer, more automated finishing gear, but for now, operators still find themselves caught between two manufacturing worlds.

“We’re transitioning to digital devices, where fold plates are servo driven, and you can store programs for common folds,” he notes. “It’s a challenge to have that mix of equipment and the right work force to support it.”

Pii has enjoyed the exposure of having several folding projects profiled on Trish Witkowski’s “60-second Super-cool Fold of the Week” video series. These marketing pieces include a mailer for an umbrella insurance policy — a half-fold sheet that, when opened, reveals an accordion center fold in the shape of an umbrella.

“We consulted with the local fire department and made sure all of our OSHA boxes were checked,” he says.

A 2021 Innovator of the Year: Spectrum Printing

Hunkeler Innovationdays Is Postponed to 2023