2021 Rising Star: Matthew Villanti is Fulfilled By Career Change that Led to Printing 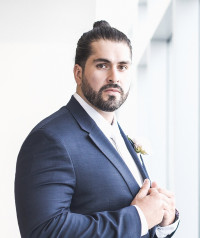 Nobody contributes more sheer effort on a football field than an offensive lineman. Matt Villanti would know. That’s the position he played on a college team, and he brings a lineman’s all-out work ethic to the team he’s now part of at Villanti Printing.

As a key player, “I’m huge on the team before me,” says Villanti, who had just finished unloading a truck at the plant before sitting down to an interview for this profile. “I bust my tail, day in and day out.” He has been doing that at Villanti Printers, a company owned by his uncle, Jay Villanti, since last October. The challenges of supporting a small, family-run printing business only make him want to work that much harder.

Originally from Texas, Matt Villanti earned an MBA in entrepreneurship from Lenoir-Rhyne University and put in several years as a real estate agent before taking his uncle up on an invitation to join the family firm. He says that although he considered himself better than average at real estate sales — which he did on a 100% commission, “you only eat what you kill” compensation plan — it wasn’t giving him the sense of fulfillment he sought in a career path.

“I wanted to be part of something bigger than myself, where I could lean in and make an immediate impact,” Villanti says. That is what he has set out to accomplish at Villanti Printers, a 62-year-old, craftsmanship-oriented commercial printing business that he describes as a “pretty flat organization” where everyone’s door is always open.

The fulfillment he was after was waiting for him. “It’s been a blast,” Villanti says of his tenure so far. “I haven’t looked back since I’ve gotten here.” His duties as a project manager center around marketing, which he’s pursuing by building up the company’s social media footprint. He also backstops sales and customer support, “working with clients as the company receives them, nurturing that transition from a prospect to a client, and then making sure that the project gets executed and finished on time.”

It’s a bit of everything, but the workload is exactly what brings out the lineman in him. “The printing industry is so robust, and there’s so much to learn — it’s like constantly drinking from a fire hydrant just to get up to speed,” Villanti says. He adds, with a touch of irony befitting a formidable competitive athlete, “The more time I spend immersed in it, the more dangerous I can become.”

Villanti may be new to printing, but it hasn’t taken him long to form a deep bond of admiration for the profession he’s embraced. “It’s a real trait, a real skill set,” he says. “It’s something that’s so tangible. Literally, that’s what printing is: tangible marketing, tangible products. It’s been so interesting to see that there still are so many institutions that definitely rely on print.”

He doesn’t expect that reliance to change. “Maybe in the far future,” he ventures, “print won’t be a thing. But the deeper I get into this industry, I just don’t see that happening in my lifetime.”

Villanti acknowledges that it’s a bit early in his career to talk about a record of professional accomplishments, but he speaks with satisfaction about what he’s been able to do for the company in terms of projecting its image.

“If you look at any of our marketing platforms, you know when there was a change in marketing,” he says. By building up a following within LinkedIn and other social channels, “I’m able to show the amazing work that we do. I’m proud of the legacy my family has created. It’s easy to stand by a product when you do really good work. I’m kind of in a marketing dream, because I have such good products and such an amazing institution to lean on.”

He’s already thinking long-term, including about what it will take to keep Villanti Printers properly staffed in the future. “It would be awesome to have some people of my age join the company,” he says. “I know that I’m going to need a team around me in 15 or 20 years that I can rely on.”

His advice to employers: “Once you have a young person in your doors, lean on them to attract other young blood.” This can be done by having casual conversations with peers, and, post-COVID, inviting them to come in and see the plant. “It’s just about exploring those relationships, and seeing if you can get them to get a taste of it,” Villanti advises.

For now, he’s relishing the tasks in front of him with the same gusto he used to find in facing down an opposing lineman on the football field. “I love having a day that’s not the same as every other day,” Villanti declares. “I leave here most days feeling really excited, feeling just as jacked as when I walked in.”

Optimize Your Company From Front to Back

To Differentiate, Play to Your Strengths