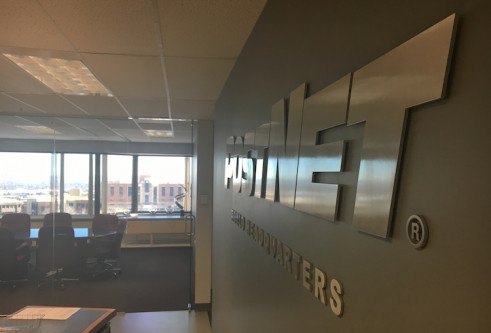 DENVER — January 17, 2017 — PostNet, the leading printing and shipping franchise with 650 locations across 10 countries, has moved its global headquarters from Denver’s historic LoDo district to the lively Union Square neighborhood of Lakewood, Colo. The new office, located at 143 Union Boulevard, Suite 800, in the 10-story Wells Fargo building, is now the company’s new base of operations.

With nearby hotels, restaurants and light rail access, and views of both the Front Range and Denver skyline, the new office is the perfect setting for PostNet’s next phase of growth.

“This is an exciting time for us,” said Steve Greenbaum, CEO of PostNet, who co-founded the company with President Brian Spindel nearly 25 years ago. “For an established, growing franchise company like PostNet, moving our corporate employees from a two-story configuration into a one-floor space will create a more synergistic and powerful work environment, allowing for better teamwork, collaboration and productivity as we continue on our growth trajectory.”

Over the last 18 months, PostNet expanded its presence across the country, achieving two major growth milestones: opening its first-ever center in the state of Connecticut and opening its first center on a college campus in West Virginia. As part of the brand’s digital evolution, the company also expanded its reach and increased its depth of solutions by launching an online print ordering platform and becoming the first-ever national franchise chain to offer virtual mailbox services.

With momentum behind the brand, PostNet plans to open six new centers in the first quarter of 2017, one of which will mark the brand’s first center in the state of Mississippi. Throughout the remainder of the year, the company will continue to grow with new domestic and international center openings.