Technology Trends from the InfoBlog
June 5, 2017

Are Millennials All That Different?

Companies are eager to learn more about Millennials, or those born roughly between 1981 and 1997 (making them between 20 and 36 years old). As they enter the workforce and move up the corporate ranks, they are increasingly making decisions around what to purchase and how to conduct business.

Here at Keypoint Intelligence, we frequently receive questions from clients interested in how Millennials are behaving differently from their Generation X and Baby Boomer counterparts — particularly from an office printing and document workflow perspective. Perhaps surprisingly, a mounting body of research is showing they are quite similar in their habits.

European Primary Research as an Example

Last year, we conducted a Web survey of 250 Western European office workers (125 in Spain; 125 in the United Kingdom). Responses were balanced across four age ranges: 18-29 year olds, 30-39 year olds, 40-49 year olds, and 50+ year olds. Among the 18-29 year olds, the large majority of whom are Millennials, printing levels were similar to (and in some cases greater than) those of older workers. For example, similar percentages of Millennials are printing various document types.

Percent of respondents that print various types of work documents

This finding is reinforced by other survey questions. For example, the average number of print jobs performed annually is similar among the different age groups. Of the 18-29 year olds printing customer billing/invoices, for instance, they are printing them on average 129 times per year. This compares with 120 times per year across the different ages. Millennials are also using their office MFP (multifunction printer) at similar rates. 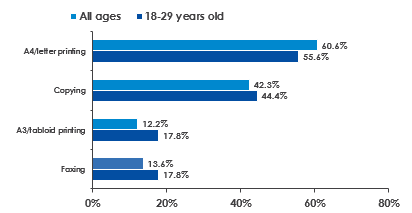 We did encounter, however, a notable difference between Millennials and older workers. It appears that the younger group has less access to a printer at home. Of those printing personal documents at the office, Millennials are more likely to say it’s the result of no printer at home. This could represent a shift in the perceived necessity of a home printer, even as printing remains an important part of office document workflows.

Why do you print personal documents at the office?

So, what’s the key takeaway? Well, I think we can say with certainty that declarations of digital natives abandoning print are far from true. This is supported by this particular European research as well as various other primary research studies we have conducted across regions, business size categories, and vertical industries.

Certainly, Millennials are adopting new ways of working by their mere exposure to computers, the Internet, and mobile devices from a young age. This may be driving reduced use of home printers by this age group, particularly as other printing options (e.g., retail locations, websites like Vistaprint) become easier.

But when it comes to work, Millennials are often bound by the document processes that are in place. If their organization requires printing for things like contracts, expense reporting, and marketing collateral, then they are going to be printing — regardless of their affinity for print.

That said, as Millennials move further up the ranks and make more business decisions, there is a greater likelihood they will be the ones determining the business processes. Given some of the perceived drawbacks of printing, including supplies costs, there’s a real possibility these individuals will implement changes that chip away at print volumes.

It’s up to the printing industry to convince Millennials why printing is worth the associated costs, particularly when spending on other IT components (e.g., servers, cloud storage, software) is increasingly viewed as essential to productivity and employee/customer satisfaction.

New Ways of Thinking Can Save Your Operation Money

Idealliance Recognizes Leadership Prior to Merger

END_OF_DOCUMENT_TOKEN_TO_BE_REPLACED
Subscribe
Upcoming Webinars
Inkjet: It is Here and Now