Interactive Clickable Paper Textbook for Graphic Communication — How It Came About

The article generated considerable interest, so I thought that readers would like to know more about how this came about.

In 2012, the Ricoh Corporation, one of the largest digital technology original equipment manufacturers (OEM) came to Cal Poly’s Graphic Communication Department in San Luis Obispo, California with a seminal idea. The idea, posed as a question was:

Is it possible to develop PRINTED material using Augmented Reality technology in such a way that the printed pages “come alive” with presentations, demonstrations, and related videos using mobile devices such as smartphones and tablets?

Ricoh came to Cal Poly because the Graphic Communication Department was already in the forefront of bridging traditional print with digital technology for numerous segments of the graphic communication industry, including commercial printing, publishing, packaging, and others. In fact, Cal Poly was the first university to have a fully equipped desktop publishing lab in the mid-1980s equipped with 24 of the earliest Apple Macintosh computers and two LaserWriters, donated by Apple Computer to the Graphic Communication Department. Professor Emeritus Michael Blum was responsible for working with Apple in arranging this gift.

Following this, in rapid succession, were other digital OEM leaders wanting to be part of Cal Poly’s advanced teaching in digital imaging. Companies such as Xerox, Konica Minolta, Kodak, Xeikon, HP, as well as Ricoh donated technology to make the Graphic Communication Department a leading resource, not only for teaching students and preparing them to enter the field, but also to train industry members through seminars and workshops in Cal Poly labs. In fact, Cal Poly taught these companies about digital printing technology development and marketing, as many of them were transitioning from the copier business to the broader digital printing and imaging business.

So, Cal Poly was a logical place for Ricoh to come to explore the idea of an Augmented Reality approach to print imaging that Ricoh trademarked as Clickable Paper. Ricoh scientists and technologists developed the software, and Cal Poly helped develop the application of the software through the department’s Graphic Communication Institute at Cal Poly (GrCI). The GrCI was the arm of the Graphic Communication Department, under the Cal Poly Corporation, involved in research, testing, product evaluations, seminars, workshops, conferences, and publishing.

At an all day meeting at Cal Poly in 2012, a Ricoh team presented the Clickable Paper idea to the Graphic Communication faculty and staff, and contracted with the GrCI to develop applications and to beta test the Clickable Paper app. The testing was highly successful, and Ricoh began to promote Clickable Paper as a marketing device for any company to advertise their products or services in printed advertisements and brochures, using the Augmented Reality approach to show videos and related presentations, all from printed pages. Students at Cal Poly also demonstrated Ricoh’s Clickable Paper technology as part of Technical Association of the Graphic Arts (TAGA) student research papers, and for Phoenix Challenge presentations encouraging the exploration of unique career opportunities.

It wasn’t until 2017 that the idea was presented to Ricoh to use the Clickable Paper application for full textbooks to enhance the teaching and learning process. The idea was that students learn best in different ways. Some learn best by reading, some from videos, some from listening, and some from a combination of these approaches. Clickable Paper presented each of these possibilities, all from a PRINTED (ink on paper) book.

How the Idea for a Clickable Paper Book Developed

I am a Cal Poly Emeritus Professor. I retired in June of 2013 but stayed on to handle a “special assignment” until the end of December 2014. I was also the Department Head of Cal Poly’s Graphic Communication Department for 30-years straight from when I started at Cal Poly in 1983 until 2013. (I’m told that this is the longest continuous tenure for a sitting department chair or head in the history of Cal Poly, and possibly for the 23-campus California State University System). Hence, I lived through the industry’s digital transition from analog imaging, and in many cases, along with the faculty, influenced this transition.

While I am retired from Cal Poly, I am not retired from the industry. I have a vibrant Expert Witness practice, and continue to be involved in research, writing, and speaking engagements. I also continue to support Cal Poly in Advancement efforts for the College of Liberal Arts and for the Graphic Communication Department.

While still at Cal Poly, in 2007 I wrote a book entitled, Introduction to Graphic Communication for entry-level graphic communication courses. Many schools adopted the book. Additionally, some companies used it for training staff new to the graphic communication industry. The publisher was Printing Industries of America PIAPress.

Well, years passed, and I was receiving an increasing number of inquiries from schools using the book asking when it would be updated, because the technology described in it was changing rapidly. I realized this, and my standard response was that I knew the book was becoming outdated, but I just didn’t have the time to rewrite it. I was still teaching, heading the department, and even took over the directorship of the GrCI. I was also asked by the College of Liberal Arts dean at the time to help-out and simultaneously chair the Journalism Department for two years at a time between permanent Journalism chairs. I just didn't have time to update my textbook…until I received a fortuitous phone call from an industry colleague, John Parsons, who was previously editorial director of a well-known industry publication, The Seybold Report. John explained that he was going out on his own as a writer, and wondered if I had any project ideas for him.

After pondering John’s request for a few days, it occurred to me that if I had a coauthor, perhaps together we could update the 2007 edition of Introduction to Graphic Communication. I proposed this to John, and he liked the idea. However, we decided that we didn't want the rewrite to be just any book; we wanted it to be special and unlike any other book ever published. It was then that I recalled the work we did at Cal Poly with Ricoh in developing Clickable Paper, and thought that, perhaps, using that Augmented Reality approach would provide the uniqueness we were striving for. I bounced the idea off of Ricoh, and they liked it, and offered to support the effort through video uploading to the Ricoh Clickable Paper cloud, and even fund the initial printing. 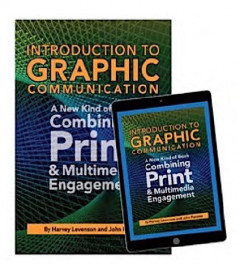 The first book to ever use the Clickable Paper app, developed jointly by Ricoh and Cal Poly, was born in 2018. Entitled, "Introduction to Graphic Communication," 2nd Edition, the publisher was, and continues to be, IntuIdeas, a company established by John Parsons that specializes in writing, and John and I became the coauthors of the book.

Between 2018 and the present, the book has been adopted by 25 schools spanning high schools, community colleges, technical schools, and four-year colleges and universities. A license was also sold permitting translation to Chinese and printing to a consortium of four schools in China that teach graphic communication. It is considered the “go-to” book for graphic communication education and training, and has been endorsed by leading educators and industry authorities.

An unexpected outcome was the book’s popularity due to COVID-19, and schools at all levels needing to rapidly develop remote teaching and learning procedures. The book’s Clickable Paper application was a perfect and quick solution, as teachers were able to bring lectures to students from prominent industry authorities and even provide demonstrations of technology at work. The application also allows for the establishment of “chat groups” among students and their teachers, and even communication with the book’s coauthors. The book comes with a free syllabus and also exam questions for teachers. Having published the book prior to the pandemic, these outcomes were never anticipated, but served a very useful purpose with online teaching and learning likely to continue post COVID-19, along with in-classroom teaching, 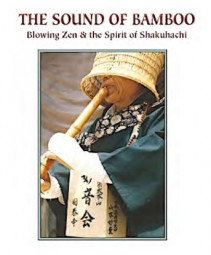 A second Clickable Paper book, by Tai Hei Shakuhachi in Willits, California, The Sound of Bamboo, was published in 2019 and demonstrates how Ricoh’s Clickable Paper is used to describe and teach about traditional Japanese music using the Japanese shakuhachi flute. Some of the world’s most renowned performers, composers, master teachers, and recording artists, discussing and demonstrating their craft, are featured in the book: https://shakuhachi.com/PG-TheSoundofBamboo.html

A third Clickable Paper book is in process that will bring further exposure to a topic of great importance. The book is authored by Cal Poly Graphic Communication alumna, Shereese Cutler, and entitled, "Black & Educated: Racial Despotism in American Education" — featuring Stories of Black Alumni and Staff from Cal Poly San Luis Obispo. The book will promote the value of education and strategies for success for Black Americans. This book will feature presentations by highly accomplished Black Cal Poly alumni who describe their personal and professional journeys, and how they overcame obstacles.

Of the many participants in the book, one is Cal Poly alumnus Astronaut Victor Glover, space shuttle Captain who returned after six months on the International Space Station (ISS). He is the first Black American to have achieved the rank of Astronaut Captain and to have spent an extended stay on the ISS. Another participant in the book is Black Cal Poly alumnus and Hall of Fame former St. Louis Cardinal baseball player, Ozzie Smith. Yet another featured alumna is Princess Inonge Mbikusita-Lewanika in Zambia, a Black Cal Poly 1964 graduate who also received her Master’s degree from Cal Poly in Education.

Augmented Reality and the Evolution of Print