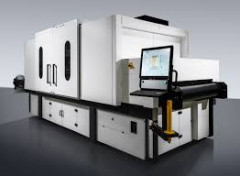 First revealed in December 2018, the new venture will be registered in Würzburg, Germany, where Koenig & Bauer is headquartered, but will be a separate entity with its own managing director, and it will cooperate closely with both parent companies. The companies expect that regulatory approvals will be granted within a few weeks, and that business operations will begin in late May. 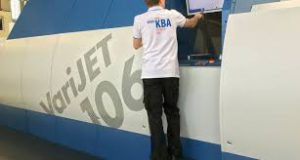 The newly combined forces have the potential to succeed in both folding cartons and corrugated – packaging applications where multiple vendors are now jockeying for position as suppliers of high-speed digital print technology. Koenig & Bauer is one of the world’s biggest manufacturers of analog presses for packaging, with hundreds of clients worldwide that print folding cartons or flexible packaging on its presses. Meanwhile the company is steeped in the topic of digital corrugated, given its partnership with HP to supply the transport for the HP T1100 (2014), the 2.5m/110˝ thermal inkjet web that pre-prints corrugated liner media with HP thermal inkjet.

As to Durst, the Italian company manufactures a big line of multi-pass flatbed printers for sign, display, and other graphics printing, including the automated Durst Delta WT250 (2016) for corrugated. Durst is also a veteran supplier of single-pass inkjet, first for ceramics (Durst Gamma) and, since 2017, Durst Delta SPC130 (1.3m/51˝) for corrugated.

Durst’s single-pass Delta SPC130 will, in fact, be one of three printers to make up the initial product portfolio of the new joint venture; the other two will be the Koenig & Bauer CorruJET 170, a single-pass corrugated printer, and the KBA VariJET 106, a B1-sized inkjet printer for folding cartons. CorruJET, a new printer, is based on Koenig & Bauer’s RotaJET inkjet web press (Fujifilm Dimatix Samba heads, aqueous inks) for commercial printing and post-prints sheets of corrugated up to 1.7m/67” wide at up to 6,000 sheet per hour. As to the KBA VariJET, it was first sighted at drupa 2016 and was to be built on the Koenig & Bauer Rapida 106, a sheetfed offset press, plus a DFE and inkjet print engine from Xerox Impika; now Durst will be the digital technology provider. 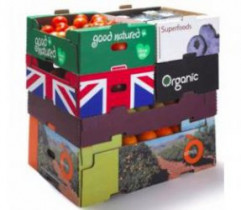 Why pay attention to “Koenig & Bauer Durst”? One reason is that so much is at stake in a rapidly developing digital packaging market. According to InfoTrends’ 2018 market estimate and forecast reports, six companies supply production-level color digital printers for folding cartons, and generated $412 million in print value worldwide in that year (20% CAGR, 2017-2022); for corrugated, the tallies were at least 11 companies with single-pass printers and $982 million in print value (51% CAGR). For each of these application segments color digital printing accounts for much less than 1% of print volume today, but that is changing as a raft of digital competitors strive to stake out positions.

Koenig & Bauer and Durst are credible, complementary suppliers that together will have high synergy in product development and marketing. We expect “K&BD” to offer competition to vendors such as Barberan, EFI, HP, and others in corrugated and HP, Heidelberg, and Landa in folding cartons, based on the new company’s portfolio of three printers, a line that will likely expand over time.

Robert Leahey has many years of experience in consulting to the peripherals and supplies industries. At InfoTrends, where he has worked since 1996, Leahey has conducted custom research projects, most often on inkjet, thermal, and color laser technologies used for commercial and industrial applications. Leahey is also the main analyst for InfoTrends' Color Digital Label and Packaging's (CDLP) continuous information service. His clients have included a wide range of printer and supplies manufacturers, and other companies, in all regions. Leahey has also been author or co-author of many syndicated research reports, on topics such as color digital label presses, inkjet coders, and brand owners' sentiments about package printing.