A Pioneer in Photo Book Finishing

Well, despite having a new knee installed a few weeks earlier, I managed to get to PRINT 18 and actually walk the show floor. And just a few booths away from where I was stationed was the Photobook Technology stand. Commanding the booth was Kurt Richter, a Swiss-Italian native who has been pioneering book finishing for much longer than I can remember.

Kurt’s philosophy was to design machinery that would fill the gap between manual systems and very high-end, high-speed automated equipment (which require a major capital investment). At the same time the “Mita” series of machines had to be able to produce photo books of the absolute highest quality. The “starting point” is the Mitablock Pro machines. Both the Mitablock 450 and Mitablock Pro will create a lay-flat photo book block using any kind of photo paper.

The main challenge in creating a professional photo book is in creating a true lay-flat book block in which a two-page photo “spread” can be viewed as a single image without any sort of “gap” in the middle. The mitabook series achieves this by creasing and folding the photo sheet, then applying a hot melt to one side, and gluing each folded sheet to the next.  A pressing unit assures a “well-pressed” book block with true lay flat.

The next step in the process is mitabook. mitabook is a “wingless” casing-in machine. Most hardcover casing-in systems use a wing, which is a metal blade that is inserted into the middle of the book block while adhesive and the book case are applied to the block.

Insertion of the metal wing can potentially cause scratch marks on the photo paper. mitabook uses a horizontal casing-in process. Both the book block and case are fed horizontally. Hot-melt adhesive is applied to both sides of the case, and the block is placed on one glued side while the other side of the case is immediately folded over and pressed. Barcode readers ensure that the case and book block match. System setup is via a touchscreen panel and mitabook can process book blocks and cases of different thicknesses in the same run. mitabook’s horizontal process also results in faster curing time for PUR adhesives.

Photobook Technologies also manufactures a fully automatic casemaker, 3-side book trimmer and a hardcover joint forming machine. As you can see, you can equip an entire short-run hardcover finishing operation with these systems. The finished products coming from each machine are of top quality (hey, it’s a SWISS system!) 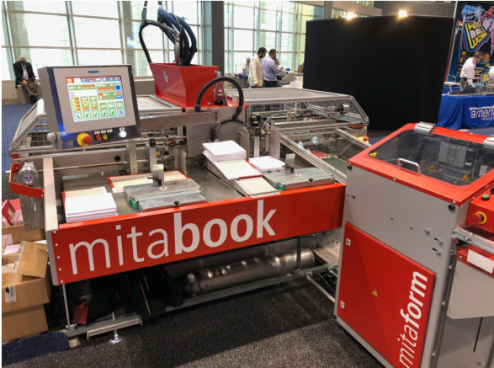 Why build such highly-engineered systems? Well, the photo book segment has matured over the years, with many mass market players in the space (Walmart, Costco). The overall quality of photo books coming from retail and other vendors varies widely. Kurt Richter’s philosophy is that a photo book contains precious memories and those memories should be displayed in the best and most attractive format possible. And who can argue with that?

Don has worked in technical support, sales, engineering, and management during a career in both the commercial offset and digital finishing sectors. He is the North American representative for IBIS Bindery Systems, Ltd. of The United Kingdom.