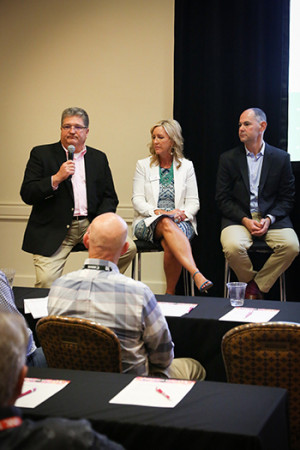 Three commercial printing operations that acquired Océ VarioPrint i300 sheetfed color inkjet presses from Canon Solutions America within the past year are excellent examples. Jennifer Eberle, co-owner and VP at Highnote; George Lawrence, president and CEO of Lawrenceink; and Matt Novak, co-owner of BFC, served as panelists during a breakout session at the recent thINK 2018 conference for Canon Solutions America production printing customers.

Louisville, Ky.-based Highnote, a woman-owned company, started out as a franchise quick printer, but eventually outgrew its franchise model and became independent. Three years ago, it merged with another local franchise operation and rebranded this past April as Highnote.

According to Eberle, Highnote was the first printer in Louisville to embrace direct-to-plate technology some years ago, and eventually evolved into an all-digital operation relying on an iGen4 digital press and some other devices to serve the automotive, financial, health care, nonprofit and spirits vertical markets.

She said Highnote had a mishmash of equipment, resulting from the merger, operating with different front ends. The business opted for the VarioPrint i300 sheetfed inkjet press, driven by a PRISMAsynch workflow, in order to replace what had become “an aging fleet” and to better serve its clientele, which often seek variable data output.

“We didn’t have a lease payment remaining on our iGen4 but, even with the lease payment on the i300, it still made financial sense,” pointed out Eberle. Highnote achieved more than 5 million clicks on the i300 within the first 90 days of operation and Eberle said press uptime rates have been more than 90% so far for the two-shift operation. “The machine has been phenomenal,” added Eberle.

Lawrenceink, on the other, went down a somewhat different path to become an all-digital printing operation.  The Atlanta-based commercial printer serves the B-to-B market, primarily catering to nonprofits and faith-based organizations.

As a commercial printer for many years with up to six-color, half-size Heidelberg printing capabilities and a full bindery, Lawrenceink installed two Canon imagePRESS C10000VP printers in 2016 and began shifting much of its work to those digital devices. The imagePRESS machines were outputting close to 800,000 impressions per month, Lawrence noted.

Then, last year, the third-generation printer decided to go all-digital by selling its Heidelberg press and acquiring an Océ VarioPrint i300 inkjet press as its workhorse device. “I didn’t see any way to sustain our business model as a conventional commercial printer,” recalled Lawrence, describing how the company moved to break away from an increasingly commodity business. “We were sick and tired of beating our heads against the wall against our peers in what was becoming a race to the bottom.”

Lawrence is pleased with the business decision to embrace inkjet and has achieved 98.8% uptime rates on the i300 after operating it for seven months. “Acquiring the i300 made sense right off the bat,” he noted, adding that his strong satisfaction and existing business relationship with Canon Solutions America also proved to be a big factor in his decision-making process.

Lawrenceink is now operating his Océ PRISMAsync-driven i300 16 hours per day to churn out postcards, books, letters, envelopes and other work.

“The decision for us to install the VarioPrint i300 was pretty simple,” said Novak, in how BFC went through the cost justification analysis. “We could print color and black-and-white for less cost per click than with our black-and-white toner clicks.”

He added that shifting existing work — such as letter mailings for insurance companies, renewal notices and contracts — to the i300 has freed up BFC to seek other work to run on its two Heidelbergs. The benefit of the i300’s white paper-in, finished product-out capabilities have also sped turnaround times and eliminated extra production steps, larger inventories and potential obsolescence.

Now, instead of printing master shells on his offset presses and then imprinting them digitally as a second step, blank sheets of paper are being fed into the i300 in a single process. The on-demand printing capability is also enabling BFC to output postcards for the customers that formerly relied on offset shells and to conduct A/B testing within a single press run.

Novak pointed to the importance of paper hygiene when running work on the VarioPrint i300. In addition, he said it’s important to pay attention to substrate specifications and whether a job requires heavy ink coverage in determining the best output device for a specific job.

Similarly, Lawrence noted that his shop has pushed its i300 to the limits in terms of substrate usage. “On uncoated, the color space is far superior to that of the Heidelberg press and, on coated stocks, the output does look a little different, so samples are critical.”

But, in many cases, Lawrence has been able to substitute paper stocks more compatible to his i300. “People aren’t specing paper liked they used to,” he concluded.

As evidenced by these three commercial printers, high-speed production inkjet is a viable — and profitable — addition to their businesses. Not wanting to become complacent, these executives understand that investing in new equipment is more than just a business transaction. This purchase supports their missions to differentiate themselves from the competition and expand their businesses into the ever-evolving digital print industry. Check out this video to see how implementing the right strategy and adding more personalization possibilities with inkjet can help to improve your profitability.