The Dynamics of Digital Finishing

Epsilon creates and executes complex programs consisting of data management, production, mailing and fulfillment, and quality control. In this highly programmatic environment, there’s little of the unpredictability that characterizes job-shop work. Epsilon knows exactly what its projects will entail, at what intervals they will occur, and what will have to be done to complete them on schedule. This makes the workload manageable, even when the printing and finishing run to millions of pieces.

For a number of years, Epsilon relied on toner-based, cut-sheet digital presses to get the color portion of the work done, eventually acquiring a fleet of 10 of these devices. The output quality of the toner presses was good, but they were slow to print, expensive to operate, and ultimately incapable of keeping up with the demands of a rapidly growing business that was increasingly focused on quick-turn, high-margin opportunities.

Truepress HD Gets the Nod

In 2015, Epsilon began replacing them with the Truepress Jet520HD High Definition Inkjet Web Press platform from Screen. With the help of Truepress Jet520HD inkjet printing from Screen and dynamic finishing technology from MBO, Epsilon can operate in a highly efficient, white-paper-in workflow that has none of the extra touches that cut-sheet production used to involve. One-pass printing that proceeds directly to one-pass, offline finishing dramatically compresses production timelines, enabling Epsilon to fulfill its SLA (service level agreement) requirements that much more efficiently.

The resulting increase in throughput has been remarkable. A run of one million pieces that took 20 days to print on a toner device now could be run in just two days on a Truepress Jet520HD —a tenfold improvement in productivity. Thus equipped, Epsilon produced 98 million 8.5” x 11” digital pages in 2015 and 292 million pages in 2016, with 350 million forecasted for 2017.

While Epsilon prints nearly 100 percent variable data on its Screen continuous digital inkjet equipment, the company still operates six continuous mono printers for the production of shell forms and mono imaging to the tune of 123 million mono feet or 268 million mono pages annually. This output also contributes to the challenge of keeping the finishing in step with the printing - a challenge met with a solution based on operating all of the presses at or close to peak productivity.

Epsilon’s objective was to run roll to roll on all of its presses to feed multiple finishing lines that could be quickly adapted to the requirements of successive jobs. The result would be the uninterrupted movement of jobs from print to finishing, helping Epsilon to streamline its transition from a cut-sheet to a continuous-feed color production workflow.

Epsilon considered its finishing options in consultation with MBO and Screen to determine the best way to integrate its printing and finishing technologies. It became clear that offline finishing was the key to maximizing both press performance and uptime.

The St. Louis facility, an MBO shop for more than 28 years, now has five MBO finishing lines in varying lengths and configurations to support the output from all of its digital presses. Each of the lines has core components—an unwinder, a cutter, and a folding unit - that remain fixed in place. Epsilon can then modularize the lines by moving in task-specific units for whatever additional finishing steps the job calls for, such as perforating, scoring, gluing, and high-speed letter folding and insertion.

Epsilon has more than 50 pieces of MBO finishing equipment that it can deploy in this way. The movable components stay in a “parking lot” (a staging area) until they’re needed. As a job is running on one of the lines, another line can be set up for the next incoming job. Caster wheels on the movable units make it easy for Epsilon’s finishing personnel to swap them in and out.

MBO, the leader in high-performance finishing solutions for conventional, digital, and hybrid print operations, began developing digital web finishing systems in 2009. Its modular finishing technology is fully compatible with all types of printing equipment from all of the major OEMs. According to Nate Milliken, Vice President of Operations for Epsilon’s St. Louis, Mo., production facility, Epsilon’s investment payback on its MBO finishing systems is about 18 to 24 months, depending on the degree of utilization.

Because it can be modified on demand, Epsilon’s press to finishing workflow is geared to completing large volumes of work in very short periods of time. If need be, the entire production floor can be dedicated to processing the application in hand. The workflow also makes it possible to reap all of the productivity that a high-output platform like the Truepress Jet520HD is capable of delivering.

For the kind of high-speed, high-volume inkjet printing that Epsilon routinely does, roll-to-roll printing and offline, modular finishing are the most efficient methods of production. There is no press downtime in this scenario as there would be with inline finishing, because there is no waiting to change inline finishing setups between jobs. The presses run continuously, enabling Epsilon to derive maximum productivity from them. The finishing lines, meanwhile, can be set up for whatever the presses send them next.

Epsilon has made the most of the combination. For example, says Milliken, by including high-speed digital folders from MBO in the finishing lines, it was possible to consolidate three production activities (score, cut, then folding) into one process (roll to mail tray) on the folders. This decreased labor cost by 60 percent.

Production figures cited by Milliken tell a story of steadily increasing job throughput. The company produced 45 million self-mailers and postcards in the last nine months of 2015, its startup year for digital production with the Truepress Jet520HD press platform from Screen and modular finishing from MBO. The number more than tripled to 136 million in 2016. In the first eight months of 2017, Epsilon ran more than 3,000 rolls, digitally producing more than 110 million mailers.

The company has been able to broaden its business base as well, according to Milliken. Sending all of the Truepress Jet520HD output through the MBO finishing lines increased Epsilon’s volume on the digital printing side by 197 percent from 2015-2016, thanks to the reliability of the presses and the unwind-rewind systems. The company’s overall annual mail volume in- creased 13 percent from 2015-2016 and is on track to increase 24 percent in 2017.

Epsilon’s story is inspiring - all the more so because of the message of opportunity it sends to other printers whose businesses are evolving in the same direction. Production inkjet is coming into its own in nearly every commercial, packaging, and industrial printing application, with direct mail in the vanguard of its progress. As Epsilon has demonstrated, the right way to leverage the potential of inkjet is to pair it with finishing systems that operate as nimbly and efficiently as it does.

MBO has been in the finishing business for decades, primarily as a supplier of postpress equipment for traditional offset production. Today, with its dynamic finishing technologies for digital printing, the company also offers new solutions for adding value to printed pieces with- out the time- and labor-intensiveness of conventional postpress. 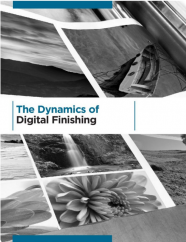 This can mean fewer touches, reduced staffing, faster processing, and improved throughput for printing businesses of all types and sizes. In this way, MBO technology fully aligns finishing with the pace, productivity, and profitability of digital printing. To learn how achieve this kind of alignment in your company, please contact Lance Martin, Vice President, National Accounts, MBO America: 609-267-2900; lance.martin@mboamerica.com.

To learn more about Epsilon, download the white paper “The Dynamics of Digital Finishing.”