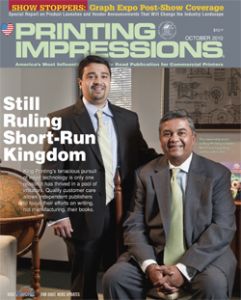 Cenveo Inc. withdrew from the bidding process for National Envelope (NEC), which was sold at auction to Gores Group for $208 million. Robert Burton, chairman and CEO of Cenveo, ultimately felt the parameters of the deal were not in the best interest of his company.

Cuyahoga County Auditor Frank Russo has been charged with using his official position to funnel nearly $450,000 in county work to a printing company at inflated rates in exchange for contributions to Russo's political campaign. Russo allegedly ticketed work to an unnamed printer between 2005 and 2007, despite the fact that the county has its own printing operation.

Court: Vistaprint Was Not Deceptive

Business-to-consumer printer Vistaprint announced that a U.S. appeals court has affirmed the 2009 dismissal of a lawsuit against the online company and two of its third-party merchants. According to Vistaprint, the U.S. Court of Appeals for the Fifth Circuit upheld an August 2009 decision by the U.S. District Court for the Southern District of Texas.

Digital Printing and Workflow News from Printing Impressions’ October 2010, including items on digital press introductions from HP, Kodak and Canon.

GRAPH EXPO certainly took on a new look and feel this time around. With the show floor mainly comprising color digital presses, wide-format inkjet printers and finishing equipment geared toward shorter-run digital jobs, someone from outside our industry would have a hard time believing that the vast majority of commercially printed pages today are still produced on lithographic, not digital, printing presses.

Fewer and fewer print customers have "print" in their titles. Looking at the titles of registrants we already have for our 5th Annual Print & Media Conference this November, I can tell you that only 18 percent do. As offset printing declines in business usage, fewer full-time professional print buyers are needed.

In the new world of sales, there remains a need to create a plan for putting your best foot forward. Since we don't have the face-to-face option like we used to, we offer three options for creating a first impression, circa 2010.

Want an honest, open, unbiased and unfettered report on the quantity and quality of visitors who haunted the binding and finishing booths during Graph Expo earlier this month? Fact of the matter is, no such beast exists. Here are some observations that have two sides to them, and may or may not represent the truth.

Drupa 2008 has claim to the label, but calling this the Inkjet Graph Expo was even more apt because the technology accounted for much of the printing equipment running on the show floor. That's, of course, factoring in the large number of wide- and superwide/grand-format inkjet printers on display.

Those lithographic printers walking the show floor earlier this month at Graph Expo in search of a bevy of heavy-iron, offset presses were sorely disappointed. With press manufacturers Heidelberg USA, Komori America and Mitsubishi Lithographic Presses opting to pass on this year's show, the South Hall at McCormick Place lacked the all-encompassing lineup of traditional press vendors that visitors in years past have come to expect.

Imported Paper Final Ruling Is Near

The Commerce Department (DOC) has issued final anti-dumping and countervailing duty margins on coated paper imports from China and Indonesia. The U.S. International Trade Commission (ITC) will hold a final vote this month to ultimately determine whether domestic paper producers were harmed by the subject imports.

King Printing : Have Inkjet, Will Dominate

Right around the turn of the millennium, Siddharth (Sid) and Adi Chinai—the father and son brain trust behind King Printing—decided to take their product to the Internet. The company now boasts a clientele list of more than 8,000, many of them small and independent publishers. Though adibooks.com may not have been the very first independent/self-publishing vehicle on the scene, it had plenty of company within a few years.

Skip the Bus, and Take the Canoe —Cagle

Called the Crazy Sustainable Commute, the one-day event on Aug. 27 challenged like-minded folks to consider breaking away from their normal car/bus/train or other fossil fuel-burning modes of transportation in favor of a greener, if not goofy, trip to work. The idea was conceived by Vancouver, BC, resident Steve Unger and his neighbor, Scott Gray, an account executive with Metropolitan Fine Printers.

The Power of Humor, Health —DeWese

My lecture today is once again about bringing in, and then keeping, business. Depending on what type of printing you sell, roughly speaking, for every $200,000 in new business that you generate, you support one new job back in your plant. That can vary greatly between high-speed, webfed printing and slower sheetfed printing.

An unpaid printing bill stemming from a failed bid for the Worcester County state's attorney post is now in the court system. Beau Oglesby faces a breach of contract suit for more than $5,700 in printing charges with Berlin, MD-based ACE Printing & Mailing.