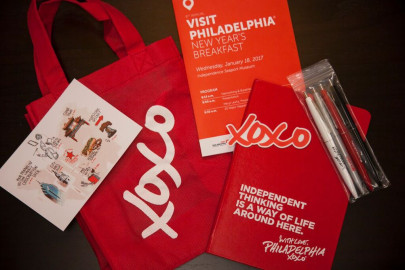 Guests received a gift bag that contained pens, an Illustrated postcard and a hard-bound journal. Guests also received a printed program of the day's events. Credit: Photo by C. Smyth for VISIT PHILADELPHIA®

What’s the best way to attract more than 600 people to an event? A campaign that draws the attendee in from the start and then wows them when they arrive. In this case, Visit Philadelphia, the region’s official tourism marketing agency, did just that when it hosted its annual New Year's Breakfast on January 24, where more than 600 hospitality industry representatives attended, plus about a dozen media. Philadelphia Mayor Jim Kenney spoke at the event, and several city officials attended.

According to Cara Schneider, media relations director at Visit Philadelphia, all of the printed materials that were created for the event reflected the energy in the room - which was bold and unified. 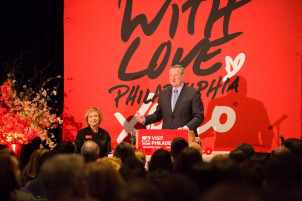 As part of the event, the printed materials consisted of 600 programs that were printed on a Xerox Versant 80 digital press. The programs also included a perforated tear-off questionnaire - a Graphic Whizard CreaseMaster Plus was used for the creasing and finishing of those questionnaires.

In addition, 15 large directional signage were printed by Philadelphia printer Kelly & Partners on a Canon imagePROGRAF iPF815 wide-format printer. Also displayed at the event were nine retractable pull-up banners that were produced by Big Mountain Imaging, also based in Philadelphia, on an EFI VUTEk GS3250 wide-format printer; and 30+ small directional signs that were produced in-house.

One wide-format graphic that stood out was the backdrop behind the podium, which according to Schneider, made quite a splash. The image was 10' wide x 8' high, and was produced by Big Mountain Imaging.

Visit the gallery below to view some of the wide-format graphics from the event: 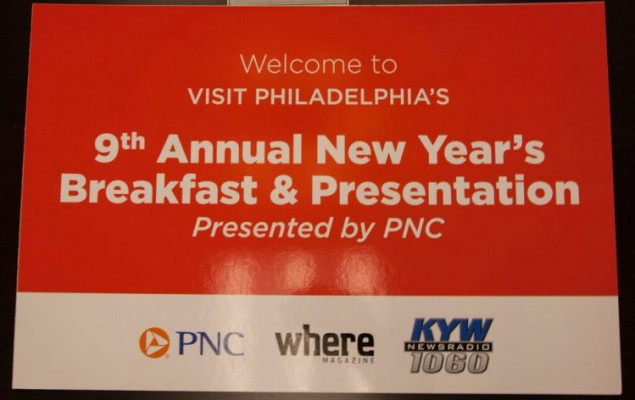 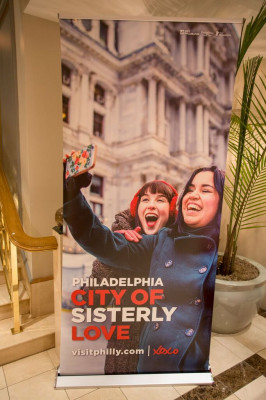 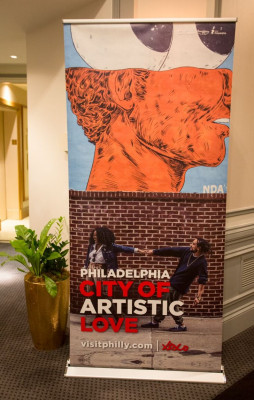 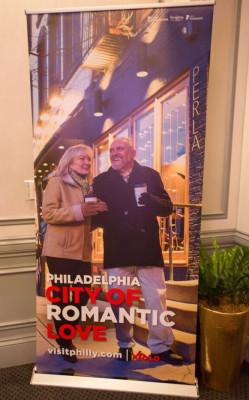 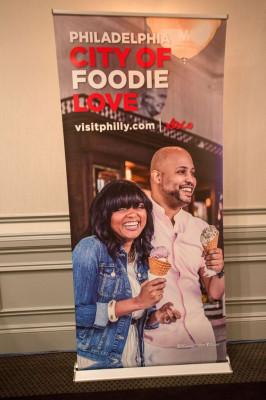 According to Nathanael Saldana, creative director at Visit Philadelphia, some of the materials that were designed in-house, were custom imprinted, and featured Visit Philadelphia’s newly designed corporate logo, which was announced at the event. Attendees also received gift bags that contained pens, an Illustrated postcard and a hard-bound journal.

"I felt very proud of how everything came together," noted Saldana. "Regarding timing, everything arrived within the week before the event, allowing for plenty of time to stuff the gift bags and be prepared for setup. I also felt that all the items worked together to create a cohesive branding experience."

Overall, the Visit Philadelphia staff received many compliments and were pleased with how everything came together to create a successful event. "We're very happy with how the collateral set the tone of the event," concluded Schneider.