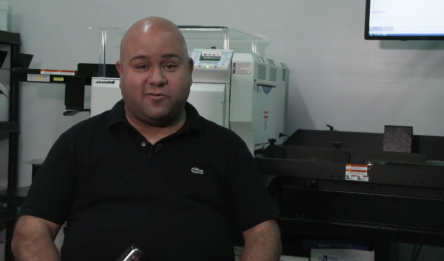 Enrique Eduardo says the cost effectiveness was a big reason for purchasing the Impressia.

MIAMI — April 5, 2017 — Symmetry Printing and Marketing, based here, has nothing but great things to say about the Xanté Impressia with Enterprise High Speed Feeder. Enrique Eduardo is one of the owners, and says his shop has seen a huge return on investment since purchasing the Impressia a year ago.

“Our investment has paid for itself, I would say, in the first two or three months,” Eduardo says. "The quantity of envelopes we have run in the past year is over 200,000 where the costs, compared to what we have been able to charge, have allowed us to pay for the machine.”

Eduardo says the cost effectiveness was a big reason for purchasing the Impressia.

“On the press, the costs are higher and the Xanté offers a much more cost effective alternative to providing customers full color envelopes. It also allows a reduction in the cost per envelope,” he explains. “A lot of people in these days want lower quantities instead of large quantities.  It allows us to add different information like addresses or different names on each envelope; that allows us to offer new services for our customers.”

“The high capacity feeder is a tremendous tool because it allows us to load between 500 and 1,000 envelopes at a time and run them without having to be right beside the printer. One of the benefits that I have seen is that it runs them so fast that within 15 minutes the job is ready. So we find ourselves not having to be beside the machine, but coming back to it because the job has finished,” Eduardo adds.

“The iQueue software has been incredible,” relays Eduardo. He named a few of his favorite features including variable data, organizing files and print cost estimates.

“The tools within the iQueue software from Xanté are incredible. The part where you can import the artwork and it stores it makes it easier ... Also, the part where you have files organized for each customer, you just look for that customer's folder that contains all the files for him, making it easier to locate,” he said. “Variable data is excellent for making direct mailers, invitations, allowing you to place each name with only the artwork and the list of information.”

“I would definitely recommend the Xanté to anyone. It's a machine that allows us to do jobs we have not been able to do before and allows us to do it at a faster speed,” he concludes.

Click here or below to to learn more about why Enrique Eduardo likes the Xanté Impressia: