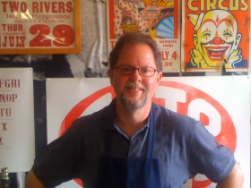 TWO RIVERS, Wis. — January 12, 2017 — Jim Moran, the museum director at the Hamilton Wood Type & Printing Museum based here, is passionate about letterpress. After all, printing is in his blood. In the year 2000, Moran was the owner of Moran's Quality Print Shop in Green Bay, Wis., succeeding his father and grandfather in the business. At his father's suggestion, Moran donated an 1895 Hickok Double Beam ruling machine to the museum that was founded in 1999 by the then Two Rivers Historical Society president Jim Van Lanen Sr., and that’s when things started to happen.

"My father and my grandfather were rulers and binders, though offset printing rendered the machine obsolete. Once they re-assembled the machine again at Hamilton, I began volunteering occasionally and donating more of the letterpress equipment that we were using less of." Moran’s younger brother Bill, a graphic designer who published a book about Hamilton in 2004 titled, "Hamilton Wood Type, A History in Headlines," often joined him. "The opportunities for the museum seemed endless, though the place was generally void of visitors for long stretches. As my own volunteering increased, I wanted to find a way to make the place work. I inquired about becoming the director in 2008 and was hired in 2009. I immediately hired my brother as an artistic director." 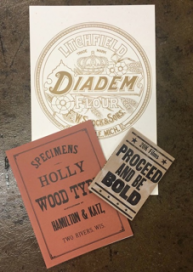 Moran adds that the print shop in Green Bay had closed some years earlier and, while he remained employed at a couple of shops, he wanted to be involved in letterpress preservation. "It was in my blood and meant more to me than running sales and marketing for offset shops.”

Today, the museum is operated by staff and volunteers of the Two Rivers Historical Society, many of whom are part of the history of Hamilton, as former employees. 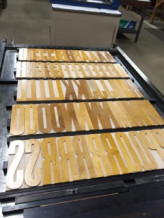 "We have benefited from the life experiences of the many people who actually made the exquisitely detailed wood type and who still reside in Two Rivers," relays Van Lanen. "These people are in their 70s and 80s. They show us, from memory, how the type workshop really operated — the old secrets that make these extraordinarily beautiful and distinctively American alphabets."

The museum is said to contain the world's largest collection of wood type — well over 1.5 million pieces dating back to mid 1800s. Hamilton houses two working pantographs, nearly 50 presses (many of them are working), and hundreds of type cabinets and letterpress tools. In addition, the museum contains a collection of 2,000 decorative wooden advertising blocks from Chicago's Globe Printing dating back to the 1920s featuring images from entertainers to rodeo characters. Hamilton also recently acquired five semi trailers of early 20th century hand carved blocks, cuts and type from Enquirer Printing in Cincinnati. 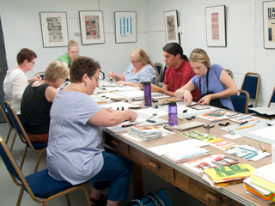 A book making workshop at the museum.

"Imagine a 12x7-foot circus tiger print with the blocks to go with it. Coney Island diving girls, Ripley's Believe it or Not circus freaks. We have everything from 'The Girl with the Radio Mind' and 'The Armless Knife Thrower' to hundred of clowns, lions and county fair dare-devils."

When visitors take a tour of the Hamilton, they will learn more about historic and decorative wood, take a journey through the machines and tools that were used to manufacture wood type, and see working pressrooms where the museum teaches and continues to produce letterpress printed pieces.

The museum also holds letterpress and bookmaking workshops regularly for the novice, as well as for students. Moran says that throughout the years, visitors have asked how they can volunteer or intern and have even thanked the museum for preserving the past. 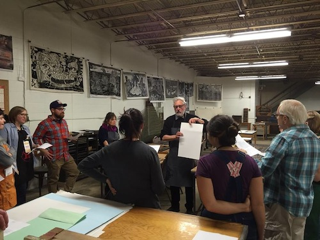 "Historically, wood type was the newspaper headline, the billboard, the broadside and the handbill. This was how we communicated when we had no other way," Moran explains. "Choices in type styles were meant to attract, identify, describe, advertise or amaze. None of that has changed. We still use the same 26 letters as a way to speak to one another. The decisions in style are still pertinent, though the method has changed."

He continues, "Printing history is American history and the principles of type choices are historically still valid and critical as a way to look at the present and the future. Form and structure in printing is important in the same way that studying old buildings are important to a new architect."