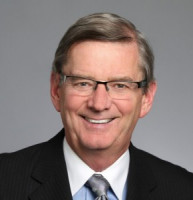 (Editor’s note: Paul Reilly, partner of the investment banking firm New Direction Partners, has announced his intention to step back from a full-time engagement with the M&A consultancy he co-founded. For his concluding column in this series, we asked him to review the highlights of his long career in bringing buyers and sellers of printing and packaging companies together.)

Paul Reilly: In 1978, I was working for Arthur Andersen (then a “Big Eight” accounting firm). I had a client, Polychrome, and they offered me a job. I took it, and it turned out to be a great opportunity. Polychrome was a global company, and I stayed with them through 1993, ultimately in the role of president responsible for essentially half the world — North America, South America, and Australasia.

During that period, Polychrome was a public company. A few years after it was purchased by Dainippon Ink & Chemicals, I left to join a small business. I was involved with my partner at the time, Gerry Mahoney, who owned an envelope company in Jersey City called Pavey Envelope. The two of us worked together for 10 years building one of the largest printing firms in the world.

With the support of private equity, we purchased Mail-Well Envelope and American Envelope; and for a while, we were known as Mail-Well American Envelope. To bolster our prospects to go public we started to buy printing companies. The first printing company purchased was Graphic Arts Center, a West Coast company with operations in Portland, San Francisco, and Los Angeles.

Shortly thereafter we went public. The markets embraced our strategy of a “roll-up,” and within a year or two of going public, we were recognized as the top-performing stock on the New York Stock Exchange. Ultimately, the company grew to more than $2.5 billion in sales.

PI: Cenveo followed a very active growth-by-acquisition strategy while you were its CEO. Why was this the plan?

Reilly: Initially, we leveraged the power of combining purchasing synergies among the acquired printing operations. When we were talking to investors on Wall Street, we demonstrated that materials purchases were about 40% of sales of a typical company we’d purchase. By combining purchasing power on day one, we could save 10%, immediately improving profits by 4% of sales.

Combining purchasing and rationalizing excess capacity drove much of the early growth of Mail-Well. Ultimately, we purchased over 200 companies in several different markets. The company was a mixture of envelope companies, printing companies, label companies, and forms companies. (Mail-Well became Cenveo in 2004, with Reilly as its president, CEO, and chairman.)

PI: Do you think that the printing industry has seen the last of large-scale consolidators like Cenveo and Consolidated Graphics? Or are more roll-ups still possible?

Reilly: Consolidation is still happening today. But the strategy of driving M&A in our industry is much different today than it was back then. And it’s not the same for everybody. Mail-Well did a lot more than mail. The products we produced touched most people in America every day. In addition to producing nearly one in three envelopes in your mailbox, we produced labels for major food and beverage products, we produced tax forms, annual reports, most car rental maps, many books you read, and calendars you put on your wall.

Our shareholders and customers sought more than purchasing synergies. We analyzed the areas in which we were most successful. We studied successful consolidators in our industry and other industries. We concluded that those consolidators that succeeded, in the long run, brought the benefits of being big to their customers.

That was the genesis of Cenveo. That’s why we renamed the company. We created one face for our customers, and we invested in computer systems and processes that facilitated the purchase of products across our entire platform — one-stop shopping. These changes in the way we operated made us easier to do business with and gave customers a broad choice of products they could acquire from a single source.

Today, that strategy drives much of what we’re seeing in the printing industry. M&A is mostly driven by bringing the benefits of being big to the customer base. Several companies today look like Cenveo and Mail-Well did in their infancy. There are several people doing roll-ups today in different parts of the country. And I believe that will continue into the foreseeable future.

PI: Please talk about how and when New Direction Partners came into being.

PI: How many M&A transactions has New Direction Partners completed since you and your co-founders started it, and what is the approximate value of those deals?

Reilly: It’s more than 200 transactions in that period, and the revenues of those companies would be over $4 billion.

PI: How would you say trends in M&A for printing and packaging companies have changed since New Direction Partners closed its first transactions?

Reilly: If you look at the way Cenveo and Consolidated Graphics started, it was very much based on the economics of combined purchasing. Today, there are several buying groups for companies in the industry that provide that benefit. So, the benefits of combining purchasing in a large company with the benefit you get from being part of a buying group are not that different.

That means that in looking to grow through acquisition, buyers are seeking different value propositions, including expansion of their geographic footprint and product lines to bring more value to their customers. One example is book printing where there is a lot of consolidation happening. We also see buyers executing regional roll-ups, providing local customers with a broader offering with the ability to service all of the customer’s needs. So there are a variety of drivers, depending on the goals of both the buyer and the seller.

In labels and manufacturing ,M&A is driven by additional factors. Labels and packaging are a very strong growth segment where being local is not as important. These companies, as well as envelope companies, can serve customers in a very broad geographic range.

In those growth markets, operators can find synergies in terms of centralizing manufacturing but keeping a strong sales presence in the various regions it serves, including, for some, a nationwide presence.

PI: What makes a printing or a packaging company succeed today? What characteristics do successful companies have?

Reilly: I think you have to look at this question by segment. In the packaging and label markets, many of them are successful because the markets they’re servicing are growing faster than the gross national product (GNP). Flexible packaging, for example, is a very, very strong market. Labels servicing the pharmaceutical industry are in high demand. So success in those markets is very much driven by servicing the underlying demands of the segments in which they compete, staying current with emerging trends, and adopting technologies that allow them to stay ahead of the game, including increased automation, online servicing of customers, and more.

In terms of general commercial printing, it’s more difficult. But the people who do succeed in the commercial printing market are embracing change. They’re not staying in one market. And they are increasingly utilizing technology to interface with their customers. Interestingly, they use customer interfacing technology more than their colleagues in the label and packaging industry.

PI: Do you see any connection between how successful – or how unsuccessful – a company is, and the likelihood that it will be part of an M&A?

Reilly: I do not. It’s not the merger or acquisition itself. It’s how well they execute it. We have seen several cases where companies completed several acquisitions, but they did not execute well once the deal was done, and they ultimately collapsed. Successful serial acquirers are those that do acquisitions based on an explicit strategy, Their goal is to be able to service customers better, increase their product line, or grow their geographic footprint. If there is a definitive strategy behind the acquisitions, they are more likely to succeed over the longer term.

About 10 years ago, Dr. Ronnie Davis (a well-known printing industry economist) showed that even though some segments of the printing market were shrinking, the number of establishments was shrinking faster than the market. So the remaining companies are stronger, and on average, are growing. The surviving companies are enjoying growth because they are getting a larger piece of a smaller pie. So there is a significant amount of M&A being driven in our industry by the ability to pick up the pieces of companies that did not embrace change and instead kept on doing things the old way.

PI: What is the most urgent piece of advice that you would offer to the owner of a printing or packaging business?

Reilly: Embrace change. My father-in-law was a photoengraver. I remember the message he sent to me when I told him I was going to work for Polychrome making offset printing plates — new printing technology. He was focused on what he was used to — photoengraving — and couldn’t conceive of a time when that would be made nearly obsolete by offset printing.

But that’s what happened. And that’s what I mean by needing to embrace change. His company didn’t and ultimately went out of business. There are many, many examples of this over the years — consider the effect of the Internet, for example, and what happened to those who embraced it versus those who thought it was a fad.

You don’t have to be leading or bleeding edge, but there are some very obvious trends that we see in the industry. One, which I mentioned earlier, has to do with technology-enabled interfaces with your customers. Another example is inkjet printing — the quality, the speed, the cost numbers — there’s little doubt that we’re going to see inkjet technology take over a very significant part of what is now offset. While offset will be around for the foreseeable future, its share will continue to decline.

PI: What’s ahead for New Direction Partners, and for you personally?

Reilly: New Direction Partners has built up a very strong brand in the industries we serve. 2022 was a record year for us following a record 2021. So, the firm is quite healthy and will continue to grow in these markets. I don’t see my partners wavering from that mission.

My title for about a year now has been partner emeritus. My objective is to work with the clients I have been working with for many years. I’ll continue to work with my current clients until whatever I’m working on is finished.

Beyond that, I have always been involved in other things. Currently, I sit on several boards. I’m also a chairman of the board and the acting CEO of a solar company. We install solar generation systems in homes and small commercial sites. I will continue to do that as well. I might even find some time to work in a little golf!

PI: Anything else you’d like to add in retrospect, or looking forward to?

Reilly: I’d just like to say that the people in the printing industry are a terrific group of men and women, most of whom understand they need to embrace change. As I look back over the years, I’ve made many exceptional friends in the industry, and I hope to stay in touch with them. I’m always delighted when folks reach out for advice, or just to catch up. And I hope that will continue.