Push Solutions, based near Milwaukee, was one of the early adopters of GEW’s (Booth N743) LED-UV curing technology, and are now capitalizing on the benefits of having an LED system retrofitted to its RMGT (Booth N801) 9 Series press.

Push Solutions began business in 2012, and now encompasses two facilities with more than 40,000 sqft of production space, running three shifts. The core business is in providing commercial trade printing services through resellers. Since the installation of the LED-UV curing system on its press, the sales team has been able to offer a much broader product portfolio due to its more comprehensive offering. 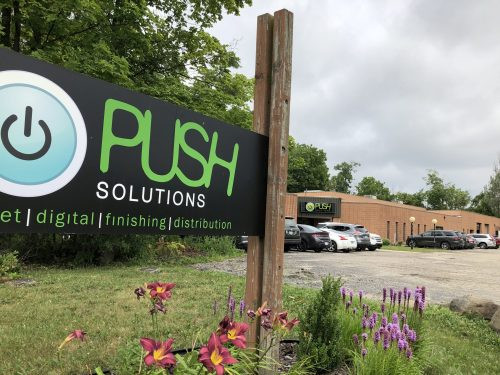 “We target ourselves towards a lot of marketing supply chain managers, so they’re working with the big-box stores, the Fortune 500 companies, and we’re basically the power behind them,” says Craig Inglish, co-owner and business development executive at Push. “It’s been great to be able to come back into the office after meeting with a new client and you know they’re up against a tight deadline, or they’ve got a new substrate to test, and know that we can do it with LED-UV.” 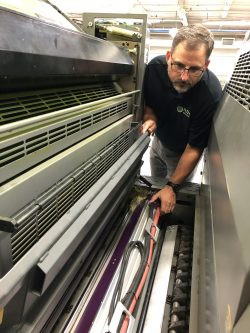 The LED lamphead is easily accessible, but is fully enclosed during operation.

Co-owner Nick Bova agrees. “Overall, LED, it was the right choice. We were nervous getting into it, but in hindsight it was a game-changer. It changed how we print, how we go to market, the substrates that we’re printing on. It just opened up not one door but 10 different doors, so now we’re a 100% UV shop — the workload has changed drastically. We have new products, we’re selling into new markets ... signage, plastics, all sorts of things we never would have even been able to touch, and now it’s commonplace for us.”

Bova also points to the speed at which they can now produce work, since the installation of LED-UV. “Jobs that used to bill for X amount of dollars printed traditional litho may have taken 20 hours. Now those jobs can be completed in four or five hours for the same amount of revenue and the same amount of cost to the client.”

It was imperative to Push that the retrofit installation was fast and trouble-free, to avoid any disruption to their 24-hour production schedule. “Their engineering and their attention to detail for us was absolutely amazing — the installation process went seamlessly, we were up in production within 48 hours. The fit and finish and their design made it flawless with the press — you wouldn’t even know that it didn’t come from the factory that way,” says Brad Flagge, co-owner.