AAA Flag & Banner is working with Major League Baseball to print cardboard cutouts of fans to place in the stadiums.

This year has been one of changed plans and businesses of all shapes and sizes scrambling to find new revenue streams to replace what dried up as COVID-19 swept across the world. Professional sports leagues were no exception, and as the new season of baseball was set to get started, the teams were looking for ways to do so safely, letting fans still show their support without putting them in danger packing into stadiums.

Enter AAA Flag & Banner. CEO Craig Furst and his company have been working with sports teams for more than 30 years, so when Major League Baseball (MLB) was looking to refer teams to a PSP to partner on creative ideas, he got the call.

“Because of our longstanding partnership with the MLB,” he says, “they referred us to the teams to provide these cutouts.” He notes that it’s not just the MLB either, that his shop is also working with teams from the other sports associations such as the NFL, NHL, and MBA to see about providing similar services.

Two of the first teams to take advantage of this unique product of the times we live in are the Oakland A’s and San Francisco Giants. “It amazes me that there are such sports fanatics who will spend the money to have their face in the seat of one of their favorite teams,” notes Furst. “It’s helping create a sense of the community we’re missing right now, and is a fascinating turn in sports history.” 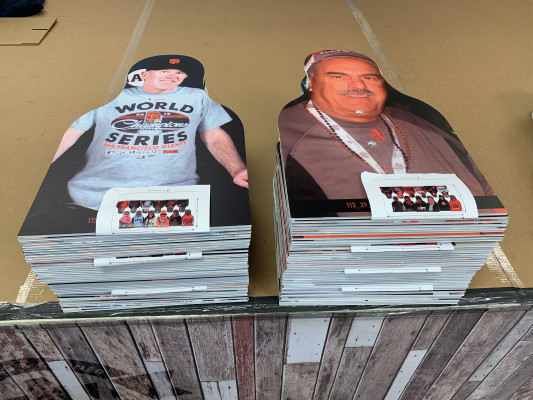 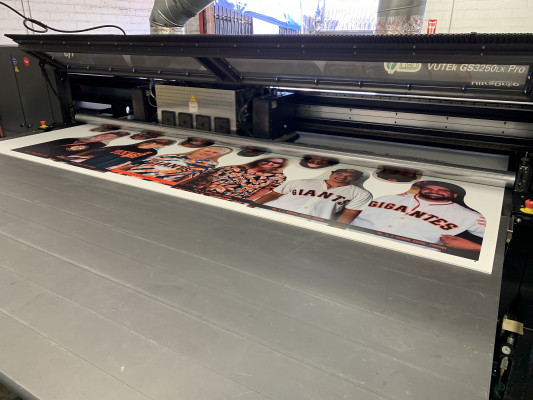 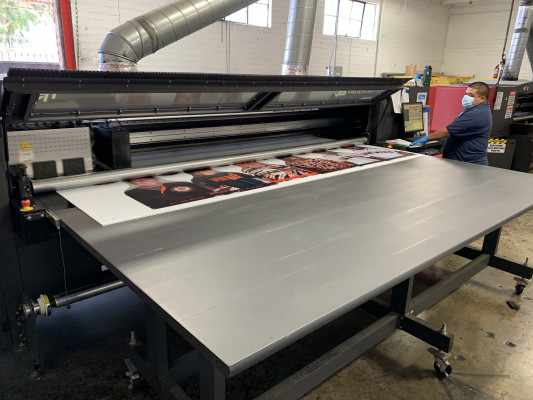 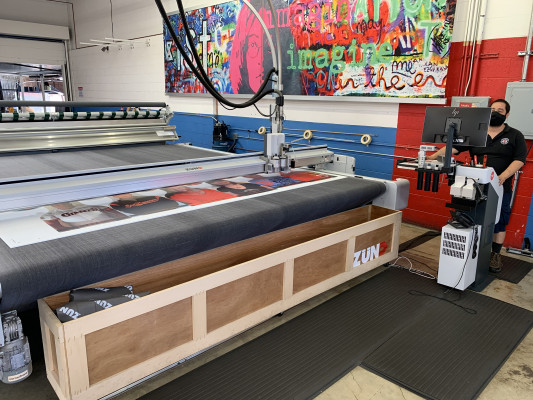 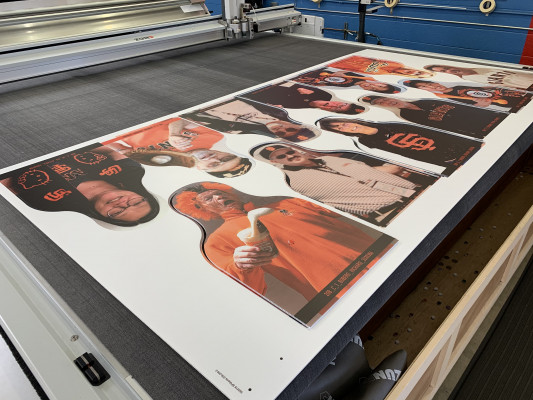 Furst says that the project came about because he saw that some teams in Europe were doing something similar, so he went to his connections at the U.S.-based leagues and pitched the idea to them. It was well received, since sports teams, like PSPs, are trying to find creative ways to recoup at least some of the revenues lost as events were cancelled for the year. While using a similar concept, however, each team is approaching it a bit differently.

The Giants, for example, “have a robust team around them to help support everything from file intake to processing.” He notes that for that team, he can print the cutouts, label them, and then ship them to the team directly, who have their own protocol for placing the cutouts in the seats without any need for further help from AAA Flag & Banner.

As a matter of fact, he notes that the team is working with a local nonprofit organization to employ some of the city’s homeless population to help deploy the cutouts, along with offering training for other types of graphics installation and trying to help them find full-time jobs.

“That’s something I’m really excited about,” says Furst. “They’re employing people that otherwise would never be able to get a job right now, and giving them an opportunity to help, with a fun way to get sports going again.”

In the case of the A’s, however, he notes that they are a bit more hands-on. “We provide them with more,” Furst notes. “We have programmers who provide an app that allows the fans to easily put their image on a template, and then it goes through an approval process.” That approval, he notes, is critical because as he learned from watching earlier iterations of the concept in Europe, some people will take the opportunity to try and submit inappropriate artwork to beat the system. A review process, with quality control, is an attempt to weed out any problems before they have a chance to make it to the press. And then Furst’s team are the ones handling the installation directly at the stadium once the cutouts are complete.

Each team is also handling who gets the cutouts a bit differently as well. Furst says he believes, if the cutouts are still in good shape after the season, fans might be able to get them shipped to them to display in their own homes, but for now that aspect isn’t set in stone, given the project is evolving as it progresses. Some teams are offering the cutouts to their season ticket holders free of charge, as a way to keep those fans engaged when so much of the value of their passes has been lost for the season. Others are selling the cutouts to any fan who might be interested in supporting their favorite team. And in some cases, the cutouts can be purchased to go in a specific seat, while in others the fans have no control over which seat the cutouts are placed in. 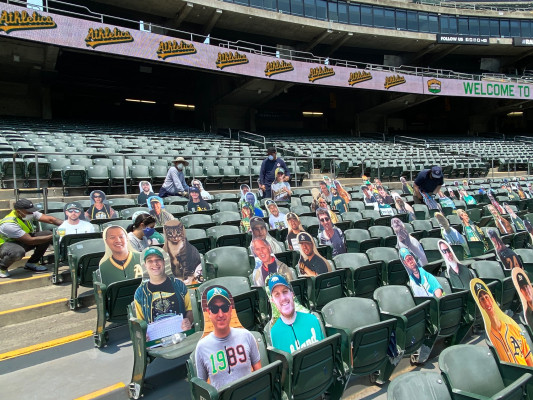 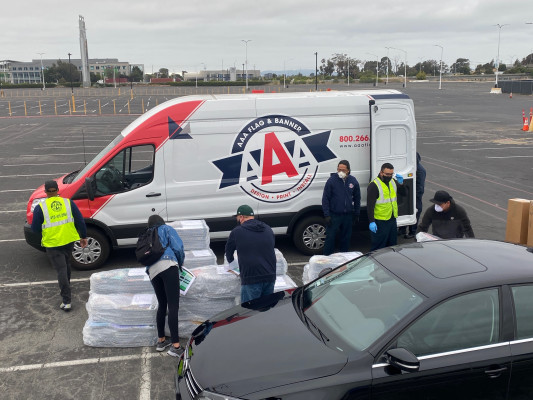 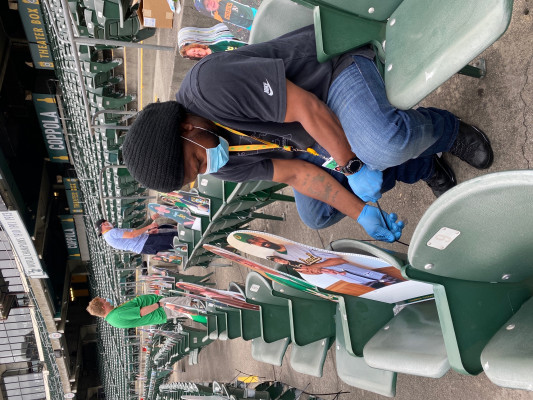 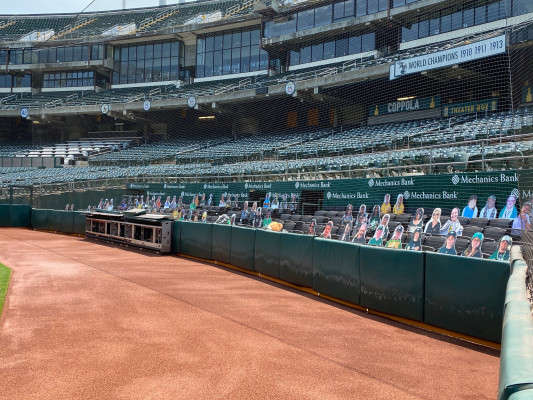 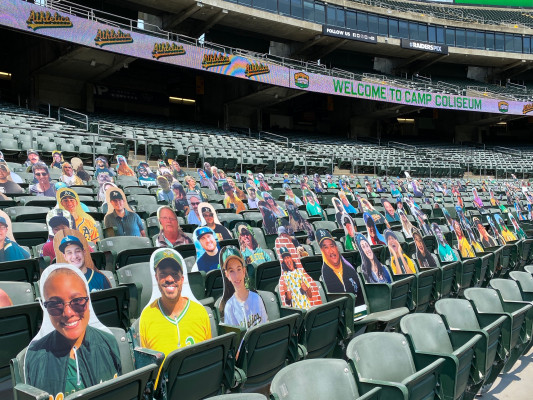 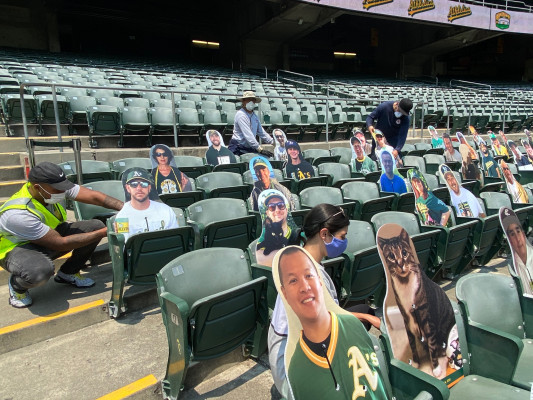 He notes that for the projects that AAA Flag & Banner are working on, they’re trying to stick with a system that doesn’t designate a specific seat. “That’s a little more complex than we’re trying to do,” he says. “We’re trying to keep it a simple program, and an affordable way to keep fans engaged in their favorite sports teams.”

But the creativity goes beyond just cutouts. Furst notes that he is in talks with teams from many of the leagues to produce what he calls seat kills — giant mesh coverings that fit over entire sections of the stadium. These, he points out, could be branding opportunities that teams could sell to corporate sponsors, or offer as a benefit to current sponsors to keep them on board, while at the same time making the stadium look better than just having empty seats when televised events start up again.

For Furst the ability to pivot and find new revenue streams has turned what could have been a disaster into a fun project that is only going to further deepen his relationship with those customers; that, in turn, will help him continue to grow even once the current crisis has passed. “This has been a welcome opportunity in a really challenging moment,” Furst says. “We have to stay creative and innovative, to find new ways to help our partners engage with their stakeholders.”

To produce the work, AAA Flag & Banner uses a dozen EFI presses, including the hybrid LED Vutek, which allow the company to print on a wider range of substrates, while using less energy. The shop also uses several Zünd cutters, along with a robust system for labeling and tracking to ensure all jobs get to the appropriate places.

The first round of cutouts, Furst notes, were “thousands, at a minimum,” although he declined to share the exact number produced for each team. Those were mostly the free cutouts offered to season stakeholders as a thank you for supporting the teams. The second round is in progress, and he anticipates that there will be thousands more when all is said and done.

That said, Furst says he hopes this isn’t part of the next normal, and that the cutouts prove to be a fad that fades as COVID-19 begins to recede. “I certainly hope this is a fad,” he says, “and that as we develop a vaccine and treatment, people will feel comfortable going to cheer for their favorite teams live.” He notes that he hasn’t had any conversations with the teams about making this a long-term project, and that across the board, most seem to want to focus more on talking about how to get back to business as usual, rather than how to extend extraordinary efforts. “Seat kills have been used for a long time, and I see that continuing for the foreseeable future, but I honestly think the fan cutouts are a fad,” Furst says.

On the other hand, fad or not, the work has kept the presses running, and Furst says, has allowed him to keep the talented people he has at his shop working, keeping their skills sharp and their creativity flowing, he notes. And while he can’t predict how fast things will return to normal any more than anyone else can, he is already working on new ways to help his customers engage and protect their stakeholders, no matter what happens next.

One such project, Furst says, is the development of a film he is called safe touch, which has anti-microbial characteristics, and is made from a silver-based film. He notes that the film has been used in environments such as surgical rooms or other sterile environments for some time now, but he is looking for ways to use it new ways, such as on doors for the sports stadiums. He installed the film on more than 1,000 doors for the NFL network building already, he says, protecting employees who are opening and closing doors as they pass through.

“And we’re coming up with other ways to help in this moment,” says Furst. “[The film] is another thing I don’t anticipate staying after the COVID-19 epidemic runs its course, but we are being creative, and finding ways to make ourselves useful and relevant in a time when other businesses have come to a slow crawl.”

Furst is the second generation to take the reins of this almost 50-year-old company, and AAA Flag & Banner is a perfect example of how innovation and a willingness to think outside of the proverbial box can help drive a business forward, even in the most challenging of times. It is a lesson PSPs across the country can learn from — it’s not just professional sports teams looking for ways to engage their fans, there are also collegiate and even high school teams.

And beyond sports, there are thousands of clubs and activities on every level that have been sidelined due to the pandemic. How can a creative PSP find new ways to use print to connect these groups again, opening up entirely new lines of revenue, forging new relationships, and strengthening old ones? COVID-19 is a chance for PSPs to shine and show exactly what they are made of. As this example so clearly shows, print is the answer to a lot of problems, printers just need to get out and let people know about it.