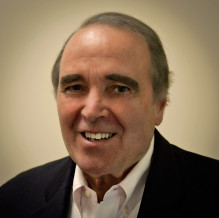 Noted management consultant Peter Drucker once said, “Management is doing things right; leadership is doing the right things.” If Drucker was looking for a best-in-class business entrepreneur to reference as an example, John Galligan, the longtime president and owner of the K-12 educational book printer, Bradford & Bigelow (B&B), certainly qualifies.

B&B was a five-person, one-color, sheetfed printer, generating $200,000 in revenue and losing money in a South Boston loft, when Galligan purchased the company for $25,000. Since then, B&B has grown into a $75 million K-12 educational workbook supply chain partner with aspirations to reach the $100 million annual sales mark within the next two to three years.

A 1969 Boston College and 1972 Harvard Business School graduate, Galligan was first exposed to the printing industry when a Harvard professor suggested he consider a job opening at book manufacturer Courier Corp. in Massachusetts, which was then family-owned.

Two years later, after seeing an advertisement in the Wall Street Journal for a printing company for sale called Standish Press, Galligan acquired the small business, and subsequently merged that into B&B, which he acquired two years later after seeing a similar ad. Galligan grew B&B into a $15 million print provider of computer manuals for then-leading mini-computer companies like Digital Equipment, Wang Labs, and Data General, before that market collapsed due to the launch of Microsoft and the personal computer. That’s when B&B refocused its marketing efforts to the K-12 educational workbook market.

The early years were tough as B&B was the “new kid” on the block and many publishers had well-established relationships with much larger, diversified suppliers. However, Galligan saw an opening: “If we focused on one trim size and could offer better service, we could build a successful business.” In 2001, B&B made another key decision and “bet the ranch,” purchasing one of the first 48-page Timson Zero Makeready presses in North America.

The technology was a game changer: printing 48- versus 32-page signatures created far more efficiency in both the pressroom and the bindery. Additionally, the zero makeready feature was a huge advantage, reducing the makeready time on one-color work when most workbooks were only one or two colors. In fact, B&B liked the Timson technology and its knowledgeable sales manager, Steve Fyfe, so much, the company went on and purchased two additional Timson presses. 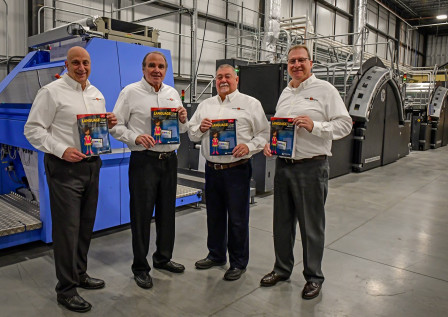 “Unlike many of our worthy competitors that want to become diversified marketing services providers, B&B is proud to be an ISO 9001:2015 and G7 certified, top-of-the-line book printer solving our clients’ supply-chain needs so they can focus on content development and marketing their products,” explains Emily Kotecki, B&B marketing manager. This strategy, she says, has been a significant contributor to the success of B&B and its sales team.

Loyalty Is a Two-Way Street

One of the accomplishments Galligan is most proud of is how B&B responded to the onslaught of the COVID-19 crisis. Rather than initiating layoffs, wage cuts, and reduced hours — as many printers did — B&B took a different track. The company educated team members on how to minimize risk of catching the virus and instituted strict safety and sanitation procedures throughout the 200,000-sq.-ft. operation.

Additionally, B&B allowed sales and administrative employees to work remotely and, most importantly, paid manufacturing employees an extra $2 per hour and provided free lunches and dinners. “Our team members certainly appreciated the extra money, but they really appreciated the lunches and dinners. We mixed it up daily — Chinese food, pizzas, subs, etc., and made the best of a difficult time,” Rick Dunn, executive VP, notes.

“A lot of our customers admired what B&B did and the dedication of the many manufacturing team members who worked 12-hour shifts, seven days a week, to meet our contractual obligations,” Karl Shearer, VP of sales, comments. “Both our clients and B&B senior management were very, very appreciative of this effort.” 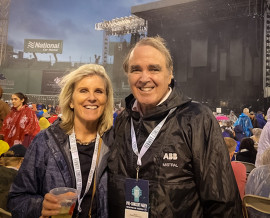 Staffing for growth is a major challenge for all companies today, yet B&B has done a far better job than most. “Yes, we do offer attractive wages, benefits, and plenty of overtime but, equally important, training and staff development are part of our DNA,” Drew Benack, VP of staff development, says.

ISO 9001:2015 is a great quality control program, but it is also an excellent system for training new team members who lack print experience. A good example of the success of this training culture is Guillermo Vargas, one of B&B’s lead HP T490 HD PageWide inkjet web press operators. “B&B is also the only company that has received two $250,000 training grants from the State of Massachusetts based upon our internal growth and supportive HR policies, which include extensive training programs, printing all company newsletters and announcements in both English and Spanish, and offering ESOL courses,” Benack adds.

These policies of training and promoting from within, and supporting team members where English is a second language, have paid dividends for B&B by creating an organization that has a very low turnover rate and a number of husbands and wives, and now their children, working at B&B.

“Our investments in technology have also been helpful in our recruiting efforts,” according to Benack. “Potential new hires from other print companies/trade schools come in for a plant tour, see the new equipment, the energy, and engagement of the B&B team members, and they want to become part of this growth and excitement.”

Longtime supplier Mark Giddings, VP of Gould Paper, states, “It has been my great pleasure to be a partner to John and the Bradford & Bigelow team. B&B’s focus on one trim size and a great ISO 9001:2015-trained customer service organization has allowed B&B to create a best-in-class supply chain platform for 8.5x11" product that’s second to none.”

John Galligan often quotes Charles Darwin, the famous anthropologist: It is not necessarily the strong or the smart species that survive, but those who adapt to change. “The same can be said for our industry — change is constant and relentless,” Galligan says.

A few years ago, he and his team at B&B saw the shift to four-color printing accelerate. Galligan — who started his career as a banker and CPA — and B&B’s long-term CFO, Carmen Frederico, decided it was time to “bet the ranch” again and put together two financing packages with their financial partner, M&T Bank, which has been a very supportive lender that understands this is a CapEx business.

In 2019, B&B launched a $15+ million expansion, which included the installation of a 48-page, four-color Manroland heatset web offset press, upgrades to a pair of SCREEN Truepress 520HD inkjet web presses with in-line finishing, a 50,000-sq.-ft. plant expansion, as well as the addition of 50,000 sq. ft. of warehousing space in nearby Seabrook, New Hampshire.

This was followed in 2021 by another $20+ million expansion with the purchase of an HP T490 HD PageWide inkjet web press coupled with an in-line Muller Martini SigmaLine finishing system; a Muller Martini Allegro perfect binder; the addition of 100,000 sq. ft. of warehousing and distribution space in nearby Newton, New Hampshire; and a second 48-page, four-color Manroland web offset press that will be installed early next year.

“The capacity expansion and installs were challenging, but also transformational, as we have created one of the best four-color print platforms in North America for the 8.5x11" workbook market,” Dunn points out. “With this platform, we have the SCREEN HDs for quantities up to three million, the HP T490 HD for quantities from three to 10 million, and the Manrolands for quantities above 10 million.”

Galligan adds that the entire expansion wouldn’t have been possible without the support of B&B’s customer base. “We are also very grateful to our loyal, long-term clients who have made these investments possible,” he says.

“John is a very proud, but humble, guy who’s constantly trying to improve processes,” points out Jason Elliott, VP of sales, at Manroland Goss Web Systems Americas. “He’s extremely intelligent and very analytical with the ability to break everything down into very simple steps.

“He’s also a very good marketer and, I might add, a pretty good negotiator as well,” he says. “And, when you listen to what he has to say, he’s not selling himself — he’s selling the value the B&B platform and team bring to their clients.” 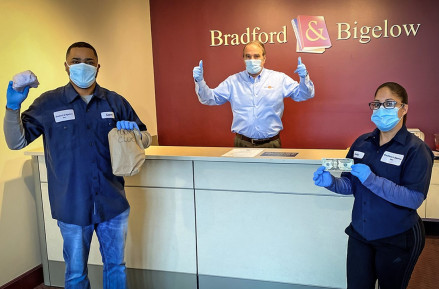 Since the installation of the HP T490 HD, which began in December 2021, B&B has become a prolific user of the inkjet web press in terms of page volume. “In May, they output more than 140 million pages alone. They’re doing the work equivalent to six 20˝ presses on that one press already,” Vahaaj Khan, sales manager, Americas Region, HP PageWide Industrial, notes.

“John is really sincere and cares about his employees and the relationships that they share,” he adds. “He’s also been a great partner to HP by being very open to letting other customers visit his facility.”

Khan points to the strong desire Galligan places to establish loyal and reciprocal partnerships with his chosen vendors, which makes both sides strive to meet and surpass expectations. “John expects a lot [from his vendor partners], but he is also very reasonable and trusting.”

B&B has remained a bindery/finishing partner with Muller Martini for more than 25 years. “The growth of B&B is truly remarkable and it is an honor to be part of this great success story,” Andy Fetherman, president and CEO of Muller Martini North America, remarks.

That sense of partnership building has also helped B&B to weather the paper shortage and other supply-chain disruptions. “We have partnered with the same paper mills and merchants in Eastern Canada and the Northeast for decades, and the fact that we basically only order three trim sizes in high volume makes B&B a very desirable client,” Paul Hutchinson, purchasing manager, comments.

Preparing for the Next Chapter

Although Galligan has no plans to retire any time soon, he says he’d “like to slow down a bit, spend more family time with the grandchildren, do some traveling with my lovely wife, and enjoy that nice Florida winter weather!

“When I went in for my 70-year-old physical, my longtime friend, high school and college classmate, Joe Corkery, MD, told me if you reach age 70, and have avoided a heart attack and cancer, statistically you have an excellent chance of living a very productive life until your early 90s,” he adds. “However, there are five keys: no smoking, moderate your eating and drinking, get some exercise — but, most importantly, stay engaged, whether it is a hobby, a charity, or a business.

“If my golf or tennis game was better, I would consider full-time retirement, but I still enjoy the game and interacting with the B&B team,” Galligan notes.

Nevertheless, he realizes the need to plan for the future and looks forward to his son-in-law coming on board in September. Imanol Cortazar — who is fluent in both Spanish and Engligh — has an engineering degree, an MBA, and a background creating operational excellence. He was a consultant at McKinsey & Co., specializing in process improvement for industrial firms. “Imanol adds youth, depth, and engineering skills to our very talented senior management team,” Galligan points out.

Cortazar is also lucky to have a father-in-law who is a great teacher and role model to help prepare him to one day lead the organization Galligan has built at B&B. This legacy and growth path forward has earned John Galligan a well-deserved place in the Printing Impressions/RIT Printing Industry Hall of Fame class of 2022.