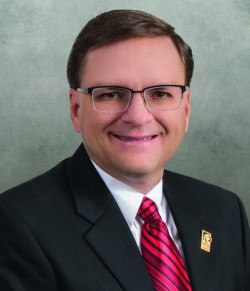 As a 2019 inductee into the Printing Impressions/RIT Printing Industry Hall of Fame, Bryan Hall’s biography is a lesson in leadership, integrity, and passion.

He is the boss and industry colleague everyone wishes they had. Yes, Hall is demanding, a perfectionist, and a workaholic. But he is also thoughtful, caring, and generous. Hall is not only a highly respected member of the graphic arts community, but he is also regarded with great affection.

“Bryan Hall’s achievements as a businessman, a printer, and a member of his community are exceeded only by the positive impact he has made in every area of his endeavors,” Joseph Truncale, Ph.D., CEO of PRSA (Public Relations Society of America) and the former head of NAPL, says.

“As a businessman, he has run and grown one of the most profitable, respected businesses in the industry. His recent change to an ESOP demonstrates his commitment to all stakeholders: employees, customers, suppliers, and his community.”

As they grew older, and with no children to pass on the reins, Bryan and Wendy Hall were concerned about what would happen to the company — and, most importantly, its workers.

“We have always been very mindful of our employees and are thrilled to give them the opportunity to carry the company’s values, legacy, and sustainability forward for many years to come,” they wrote in the letter employees received. “We feel strongly that our people are Graphic’s most important asset and that their talent, commitment, and passion for our customers will continue to drive the company’s success and growth.”

But, ever the responsible businessperson, Hall also let employees know that changing to an ESOP was a good business decision, as it provides practical payoffs for the company and its customers.

Bryan Hall literally grew up in his father’s printing business — back when kids were allowed in the production areas. “I was catching on folders and helping on presses before I was 10,” he recalls. “Today it would be illegal child labor, but I loved every second of it. As a kid, my father also used to take me to visit customers, vendors, and even to trade shows. This hands-on
experience has been invaluable to me during my career.”

He led the company from its humble beginnings into a $20 million, state-of-the-art printing, packaging, and imaging facility with 100 employees. Wendy Hall, to whom he has been married for 23 years, has a senior management position and is very active in the company.

During his 33-year career as an owner, “Bryan has been the constant force in creating the business strategy, vision, and innovation that has led to business growth, brand enhancement, and the company’s superior market position,” RJ Landry, executive VP of HR and operations at Graphic Visual Solutions, says.

“Under Bryan’s leadership, Graphic has teamed up with its customers to earn hundreds of print quality awards from the Printing Industries of the Carolinas (PINC) and Printing Industries of America through the years — including 14 Premier Print Benny Awards in the past five years,” adds Landry. “These awards recognize superior design, quality, and creativity.”

Hall attributes his personal and professional success to his father, who taught him the values he holds close: “Doing the right thing. Going above and beyond. Executing at the highest levels. Helping others. Exceeding customer expectations. Learning something new each day.”

And while the company has achieved notable success — including nine major building expansions, 12 major equipment expansions, $45 million capital investment, and the integration of two key business acquisitions  — he’s never forgotten his father’s philosophy: it’s the employees who make the company what it is. In addition to setting up the ESOP, Graphic also provides significant training programs for its employees.

And, through it all, there is the commitment to his community and to the printing industry.

“Understanding that self-improvement ends at the onset of self-satisfaction, Bryan’s commitment to continuous improvement is demonstrated by his highly-developed personal learning system,” Truncale points out. “He is a frequent participant at industry conferences and workshops. He encourages and supports that same level of involvement from his employees.

“Bryan’s commitment to his community is evidenced by his volunteer leadership in the planning, development, and construction of a new, world-class private school, providing countless students and their families the benefit of a world-class learning facility,” Truncale adds.

In addition, Graphic Visual Solutions has been recognized as a PIA Best Workplace in the Americas several times through the years, including this year. The company has also been recognized with multiple awards for its superior marketing efforts, as well as for its philanthropy and business ethics.

The list of Hall’s achievements is not only a testament to his role as a leader, but also to his passion for giving back. He has been recognized by the Greensboro Area Chamber of Commerce and the U.S. Small Business Administration as the Young Entrepreneur of the Year, among other awards.

“I can think of no one more deserving of this recognition than Bryan Hall, who has served the printing industry both regionally and nationally for more than 25 years,” Michael Makin, president and CEO of PIA, says. “He is a dedicated and principled volunteer whose passion for print is unparalleled. I have had the pleasure these past 18 months to travel the country with Bryan in his unprecedented two-year role as chairman of the PIA. He is one of the hardest working leaders I have ever had the privilege to serve.”

Bryan’s commitment to the printing industry runs long and deep. He has served on both the board of directors for PINC and on the national board of PIA for the past 11 years, as well as in several other organizations.

And now, of course, Hall’s most recent accolade: his 2019 induction into the Printing Industry Hall of Fame. “I still remember seeing the Hall of Fame inductees on the covers of Printing Impressions back when I was a kid,” he quips.

Hall considers himself to be a lucky man. His professional life has suffered few setbacks; the only one he names is the great recession of 2008, when the company suffered a significant business decline. But that was just a blip, as Graphic Visual Solutions has posted profits in 129 of 130 quarters since its inception.

One personal setback happened in the year 2000, when Hall suffered a fall from a ladder two stories up, breaking his shoulder, chipping his pelvis, and shattered his calcaneus (heel), among other injuries. “It was questionable if I was going to be able to walk again and live a normal life,” he recalls. “After surgery, and a year of recovery and rehab, I was able to overcome this incredible setback. While I can do almost anything I used to be able to do, the injury still brings daily pain, especially when I push myself physically.

“The experience taught me so much (including not to worry so much and to enjoy and appreciate each day) and brought me closer to those around me who provided so much support, especially my wife Wendy who was my caregiver during this difficult time,” he adds.

When not working, he and Wendy pursue their own shared passions: bicycling, boating, hiking, volunteering with nonprofits, and, above all, travel. 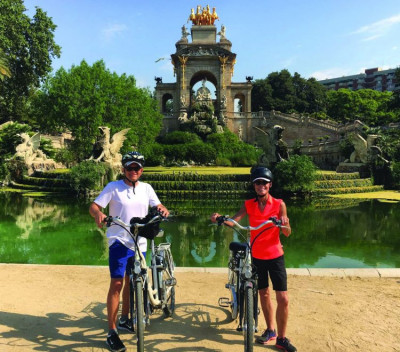 Bryan Hall and his wife Wendy pose for a picture at Parc de la Ciutadella in Barcelona, during their 250-mile bike tour through Spain in July of 2018.

He and Wendy have traveled throughout the globe, including all across the U.S., much of Europe, Australia and New Zealand, South America, and recently Vietnam and Cambodia. In the fall, they’ll go on a South African safari. On the bucket list are Asia, Iceland, and an around-the-world cruise.

“We are blessed,” acknowledges Hall. “There is a cost; we work long hours and six days a week anytime we are not traveling.”

His proudest achievements are the 34 straight years of running a profitable business (“knock on wood,” he adds), and turning the company into an ESOP.

“Bryan Hall really cares about our industry,” Paul Cousineau, VP of prepress, continuous improvement, and IT operations at Dow Jones, affirms. Cousineau will take over as PIA chairman later this year. “He’s quite an innovator and has taken his business from a more traditional print business to one that includes such services as wide-format. Bryan has kept his business relevant.

“I think highly of Bryan and have learned a lot from him. He’s very proactive about his business in promoting and moving it forward.”