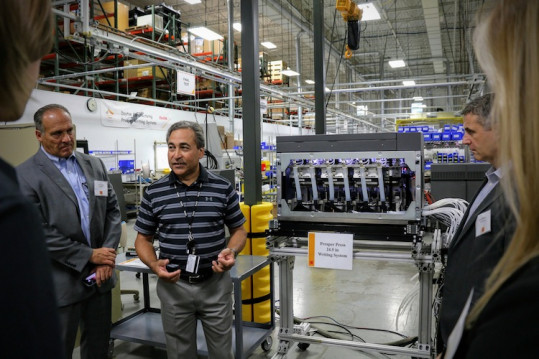 A demonstration of the Stream writing system for the Kodak Prosper inkjet press series.

Like nearly every other supplier of digital printing equipment, Kodak wants a piece of the expanding market for production inkjet systems. It’s an objective the company has been pursuing in various ways for decades through the work of what is now known as the Enterprise Inkjet Systems Division (EISD), a research and manufacturing arm celebrating its 50th anniversary in 2017.

Kodak’s renewed push for production inkjet almost failed to materialize when the company decided to put Prosper, its most advanced line of inkjet presses, up for sale last year. Receiving no offers that it saw as reflecting the true value of the business, Kodak doubled down on making Prosper technologically competitive with every other inkjet platform in the increasingly crowded market where it was now determined to fight for share. It also concentrated on engineering a new and more powerful version of Stream, its writing system for the continuous inkjet (CIJ) Prosper family.

Not content with a build-it-and-they-will-come approach to cultivating the production inkjet market, Kodak isn’t relying solely on product launches to advance its CIJ brands. The company also intends to drive the printing industry’s transition from offset lithography to inkjet by encouraging printers to try inkjet both as a stand-alone solution and as a hybrid with conventional press equipment. Partnerships with other vendors will be central to some of these efforts, leading to the introduction of new devices over the next two years.

Such was the picture drawn for editors, analysts, and others who attended Kodak’s “VIP Inkjet Summit” at EISD headquarters in Dayton, Ohio, on June 13 and 14. Presentations and plant tours were clearly aimed at positioning Kodak as a technological if not yet a market leader in the field, where it faces stiff competition from rivals striving to outpace it in machine placement and brand visibility. 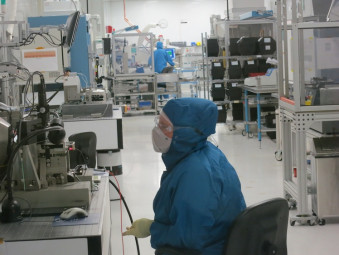 If anything can push Kodak to the head of the pack, it is the formidable scientific and production capability of the EISD. Half of its 315,000-sq.-ft. plant is devoted to manufacturing printheads, inks, and other key components. The facility includes 26 labs and 22,000 sq. ft. worth of clean rooms, where technicians in full protective clothing fabricate printhead arrays that stream nanoparticle, water-based inks at hundreds of thousands of droplets per second through nozzles measured in microns.

What the EISD makes, says Kodak, is “production digital” inkjet technology that can stand up to the demands of packaging printing and other high-volume applications. Part of the strategy is to convince brands that inkjet isn’t just for test-marketing and prototyping — it can be a high-quality, cost effective option for their mass-market opportunities as well, all the way through the product life cycle.

Everything in Kodak’s CIJ product portfolio is aimed squarely at these opportunities. It consists of Versamark and Prosper presses and, for inline use with conventional equipment, Prosper S-Series Imprinting Systems. In development for launch in press platforms from Kodak and partners in 2019 is ULTRASTREAM, a fourth-generation CIJ technology that Kodak believes will move inkjet into the front ranks of commercial and packaging printing.

Rollfed Versamark inkjet printing systems first came to market in 1998. Six years later, Kodak acquired the platform from the company (Scitex Digital Printing) that launched it. The line currently consists of color and monochrome, simplex and duplex machines operating in three speed ranges (246, 410, and 492 fpm). Although it is a legacy product, Versamark has declined in sales less rapidly than anticipated and still makes money for Kodak. The company believes that Versamark could have several more years of life before it is replaced by Prosper presses and devices based on ULTRASTREAM.

The Prosper platform with Stream inkjet technology made its first appearance in 2008. Today, its three principal models are the 6000P, 6000C, and 6000S rollfed presses. The 6000S is available either as a stand-alone simplex press or as a press that can be hybridized with conventional equipment.

At the summit, Kodak reported placing about 15 Prosper presses last year to bring the total installed base of 64, along with the sale of about 1,300 Prosper inkjet heads to various OEMs for hybrid applications. About 150 heads reportedly are at work on packaging presses and folders, where they imprint variable content on wine boxes, cigarette packs, and other high-volume items.

Prosper technology’s high propensity for hybridization has inspired Ed Zumbiel, president of Zumbiel Digital, to custom-build a flexo-inkjet combination press around it for his paperboard packaging business. Zumbiel Digital is an outgrowth of Zumbiel Packaging, a Hebron, Ky., company that has been manufacturing packaging for more than 170 years. Addressing the summit, Zumbiel said that until he saw Prosper in action at drupa 2016, he had been unable to find a digital solution capable of doing the kind of “industrial scale” variable printing he wanted a digital press to do. 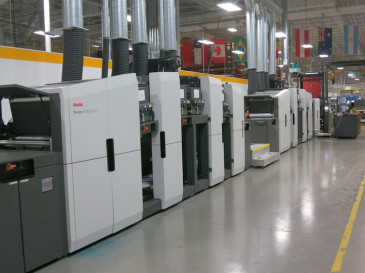 His idea was to augment a Prosper 6000S simplex color inkjet web press with an inline diecutting unit and seven inline flexo towers for precoating, PMS color printing, and other surface treatments. Zumbiel said that this 100' long hybrid press, being installed as he spoke, would enable him to both mass-randomize and mass-customize beverage can carriers and other cartons with brand-differentiating variable content. He called the 600 x 900 dpi print quality of the Prosper 6000S “much better than flexo” and praised its CIJ architecture for minimizing head clogging. The device can print a 25.5" web at up to 656 feet per minute, according to Kodak.

The Prosper 6000S at Zumbiel Digital is the first such model to be installed for packaging. For printers who aren’t this technically ambitious, Kodak has a simpler inkjetting solution in its Prosper S-Series Imprinting Systems. Mounted on offset and flexo presses as well as on finishing equipment, these high-speed print stations can add fully variable black ink, spot color, and process color to conventionally printed output. There are four models printing at 500, 1,000, 2,000, and 3,000 feet per minute respectively.

All of the ingenuity that the EISD can muster is being put into the development of ULTRASTREAM, which Kodak is targeting at packaging, label, magazine, catalog, and home décor applications. It differs from Stream in jetting smaller droplets (4 picoliters vs. 8-9 picoliters), using electrostatic charging instead of an air stream to deflect non-printing droplets, and printing at a higher resolution (600 x 1,800 dpi) at speeds of 500 feet per minute.

ULTRASTREAM is also a modular and scalable technology that can be configured in print widths from 8" to 98". The net result, says Kodak, will be inkjet presses that can go head to head with conventional web offset not only in print quality but also in production economy at high run lengths.

While Kodak may have the technological prowess to set ULTRASTREAM in motion, it knows that even with the capabilities of the EISD, it doesn’t have the manufacturing heft to make the solution dominant in the marketplace. Hence the push for partnerships, although “pull” may be a better word than “push” for the momentum with which they are being formed.

When Kodak introduced ULTRASTREAM at drupa last year, it reckoned that 10 developmental relationships with OEMs and end-users was a reasonable number to shoot for. To date, it has received non-binding letters of intent from 19 potential partners who want to explore creating ULTRASTREAM applications.

The names announced thus far are Fuji Kikai, Goss China, Mitsubishi Heavy Industry Printing & Packaging Machinery, and Uteco (which already bases a hybrid packaging and label press, the Sapphire EVO, on Kodak’s Stream technology). Toward the end of the year, these and other co-developers in Kodak’s “Pioneer Program” will receive ULTRASTREAM evaluation kits containing the hardware and software they need to build out what they have in mind. 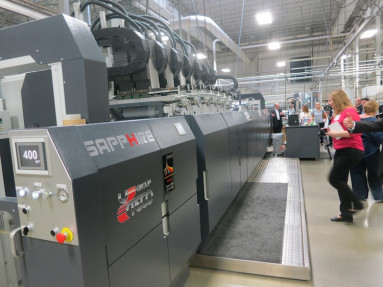 If all goes according to plan, these efforts should lead to the appearance of the first ULTRASTREAM product — not necessarily a Kodak-branded press — sometime in 2019. Prosper presses, upgradable for some customers to the new technology, will remain in the portfolio as ULTRASTREAM devices come to market.

Thanks to all of these activities, Kodak is gaining momentum on the business side as well. Randy Vandagriff, named president of the EISD and a Kodak vice president in May, said that the inkjet division had revenues of $34 million in the first quarter of 2017, a 9% improvement over the same period in 2016. In the first quarter, the Prosper business saw year-over-year annuity growth of 26%.

During the summit, attendees learned that the EISD had received a special kind of recognition from its technological peers in Dayton, whose inventors have racked up more patents per capita of the municipal population than any other city in America. Wilbur and Orville Wright designed their flying machines here. Cash registers, automobile starters, cellophane tape, storage batteries, and room air conditioners are just a sliver of the other new things that came out of this Silicon Valley precursor in the 19th and 20th centuries.

Many of these innovations are honored in Dayton’s Carillon Historical Park, a museum complex that showcases the region’s many contributions to modern progress. In recognition of its 50-year advancement of inkjet printing, the EISD has been inducted into the museum and will be given space to display artifacts of what it has accomplished in that time.