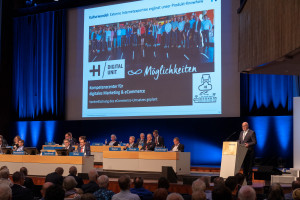 Rainer Hundsdörfer, CEO of Heidelberger Druckmaschinen AG, speaks during the annual general meeting, which was held at the Congress Center Rosengarten in Mannheim, Germany.

WIESLOCH/WALLDROF, Germany - July 25, 2018 - Around 1,300 shareholders attended the Annual General Meeting of Heidelberger Druckmaschinen AG for financial year 2017/2018, which was held at the Congress Center Rosengarten in Mannheim. Just under 38% of the company’s share capital was represented at the event.

The Management Board presented the company’s strategy and the figures for the past financial year (April 1, 2017 through March 31, 2018) to the shareholders. In his speech, CEO Rainer Hundsdörfer talked about the significant progress the Group has made in pursuing its digital transformation. A number of customers have already opted for the new subscription model that offers Heidelberg products and services under a usage-based all-in contract running over several years. In addition, series production of digital presses for packaging and label printing (Primefire and Labelfire) has now started and will have an increasingly positive impact on sales. Further positive impetus is anticipated from additional sales of consumables, increased levels of e-commerce business thanks primarily to the company’s newly founded Heidelberg Digital Unit, and the start-up of Digital Platforms.

From the left, Dr. Schuh, Dr. Siegfried Jaschinski and Ferdinand Rüesch were elected to the Supervisory Board of Heidelberger Druckmaschinen AG.

Heidelberg can thus confirm the medium-term targets communicated in the summer of 2017. These include an increase in Group sales to around €3 billion, an operating result (EBITDA) of €250 to 300 million, and a net profit after taxes of over €100 million.

AGM elects three shareholder representatives to the Supervisory Board

Approval from the company’s shareholders was needed for four of the five items on the AGM agenda, including the scheduled election of three of the six shareholder representatives to the Supervisory Board. Dr. Siegfried Jaschinski, Ferdinand Rüesch, and Prof. Günther Schuh put themselves forward for this role. In the vote on the appointment of members of the Supervisory Board, a large majority of the eligible voters agreed with the management’s proposed candidates. All three candidates are highly committed, demonstrate excellent powers of judgment, and will actively support the company as it moves into the digital future. Ferdinand Rüesch is also an anchor shareholder, with over 9% of Heidelberg shares. At the constituent meeting of the new Supervisory Board that took place after the AGM, Dr. Siegfried Jaschinski was re-elected as Chairman of the Heidelberg Supervisory Board until 2023. Shareholders also voted on a further three resolutions with a clear majority. 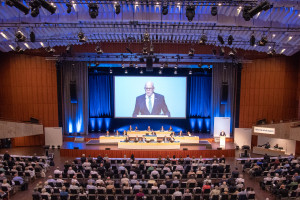 In accordance with the Memorandum and Articles of Association and the German Co-Determination Act, the Supervisory Board has twelve members. The three above-mentioned members who represent shareholders were to be elected by the AGM as set out in the German Stock Corporation Act regulations. The six employee representatives were elected as set out in the German Co-Determination Act during a separate procedure prior to the AGM. The new term of office begins when the AGM ends on July 25, 2018.

Leaders in the Fast Lane Have High Rates of Growth

LSC to Be Delisted from NYSE